Young dugong dies in Thailand in blow for vulnerable species 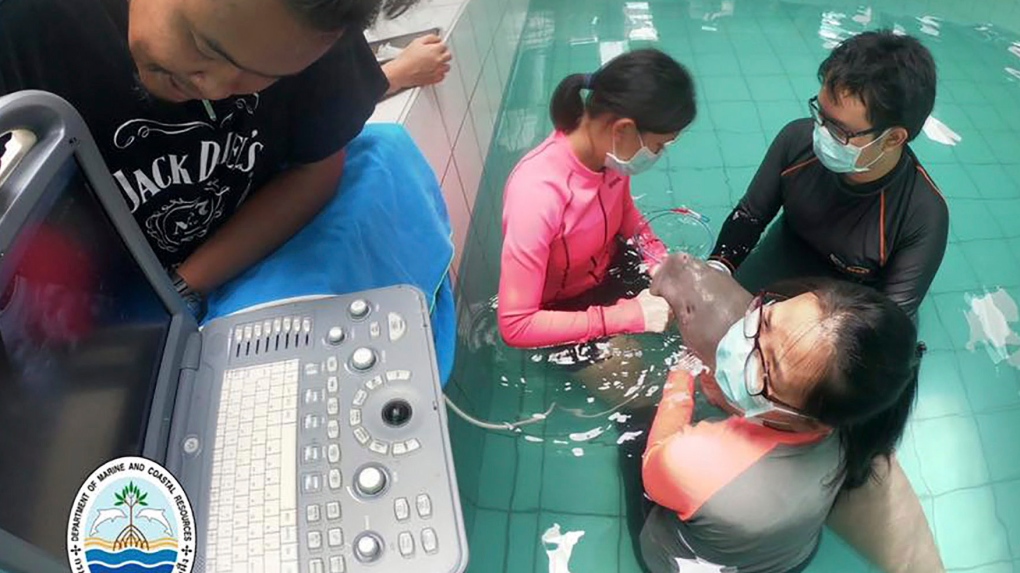 BANGKOK -- Marine resources officials in Thailand said Friday that an ailing 5-month-old dugong died during surgery, just days after the much-publicized death of another one of the vulnerable ocean mammals from what biologists believe was a combination of shock and ingesting plastic waste.

The 5-month-old male was found washed ashore last month in southern Thailand and put in a protected enclosure by marine experts.

It was found to have contracting stomach muscles and an X-ray showed a buildup of gas in its intestine together with seagrass clogging its stomach. The condition eventually caused an infection and put pressure on his lung, making it hard to breathe.

The dugong, dubbed Yamil, died Thursday during surgery to have the seagrass removed.

"Yamil was not raised on his mother's milk, therefore, his immunity was extremely low, and that makes it very hard for him to survive a surgery like this," said Jatuporn Buruspat, director-general of the Department of Marine and Coastal Resources.

Dugongs are a species of marine mammal similar to a manatee and can grow to about 3.4 metres (11 feet) in length. They are listed as a vulnerable species by the International Union for Conservation of Nature and are protected under Thai law.

There are about 250 in Thailand's coastal waters. Experts say 17 have died this year, an abnormally high number.

"Most dugongs die because of humans, especially from their fishing equipment. If we can solve this problem, then we should be able to minimize the dugong's death toll significantly," said marine life specialist Thon Thamrongnawasawat.

The female dugong that recently died was named Marium and became celebrated in Thailand after images of biologists embracing and feeding her with milk and seagrass spread across social media.

The deaths of the two dugongs have raised concern over the negligence of sea resources in Thailand, with the disposal of plastic waste in Thailand's seas being the main concern. Many NGOs have already come out with a campaign to raise awareness over the overuse of plastic bags in Thai society and advocating for Thai people to substitute it with cloth bags.