What makes a planet potentially habitable? 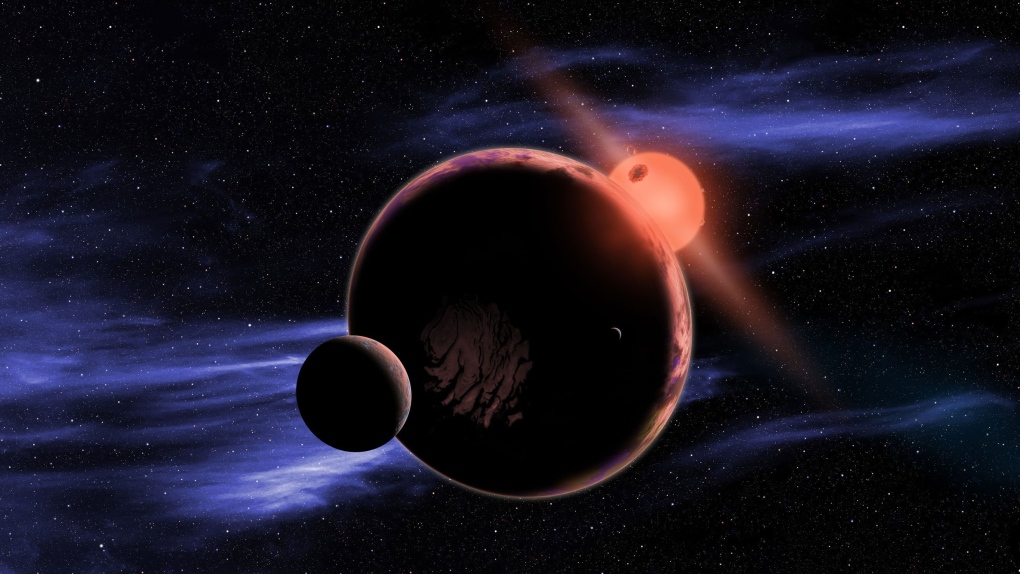 While Earth is currently the only planet known to support life, astronomers look for certain factors that hint when a newly discovered exoplanet, or planet outside of our solar system, could be potentially habitable. (NASA/Harvard Smithsonian Center For Astrophysics/D. Aguilar)

While Earth is currently the only planet known to support life, astronomers look for certain factors that hint when a newly discovered exoplanet, or planet outside of our solar system, could be potentially habitable.

They consider the type of star the planet orbits and how close it's orbiting to the star. Too close to the star and the planet will be a sizzling, heavily radiated and inhospitable place. And if it's too far away from the star, the planet will likely be too cold. On one, water would be vaporized and on the other, it would freeze.

In between those extremes is the habitable zone of the star, sometimes called the Goldilocks zone, where planets can orbit at just right distance to support liquid water on the surface.

Complex life, as we know it, requires water, which is why the habitable zone is so important. Astronomers have pointed out that life may occur and exist differently on other planets, but this Earth analog helps the search.

Understanding the types of stars that might host these planets helps astronomers narrow their search for planets that could support life.

Astronomers at Northwestern University decided to take it a step further by combining 3D climate modeling, chemistry and planets orbiting specific stars to gain a deeper understanding of planetary conditions. Their study will publish Thursday in the Astrophysical Journal.

The effects of radiation

They specifically looked at planets orbiting M dwarf stars, small and cool red stars that make up about 70% of the stars in the galaxy. In recent years, astronomers have found a number exoplanets around these stars. Although they can closely orbit the stars, which exposes them to more radiation, they're much smaller and cooler than the sun.

The researchers were able to account for the radiation of the stars and the rotation rate of the planets orbiting them when creating their model.

They found that planets orbiting active M dwarf stars which throw out ultraviolet radiation towards the planet cause the planets to lose a significant amount of water to evaporation. But not all these dwarf stars are so active. They can also be "quiet," which allows liquid water to stably exist on the planet's surface.

Ozone layers also account for the possibility of life. Using their model, the researchers found that even planets with a surface temperature that could be conducive to habitable life can be hazardous if they have thin ozone layers.

"For most of human history, the question of whether or not life exists elsewhere has belonged only within the philosophical realm," said Howard Chen, study author and Ph.D candidate at Northwestern University. "It's only in recent years that we have had the modeling tools and observational technology to address this question."

Understanding the "inner edge" of the habitable zone is crucial. It can be the difference between the probability of life and inhospitable conditions.

"The inner edge of our solar system is between Venus and Earth," Chen said. "Venus is not habitable; Earth is."

Previous research has used climate models, like the kind used to study climate change on Earth, and applied them to exoplanets. In the new study, astronomers wanted to add an ingredient they felt was missing.

Chen and his colleagues added photochemistry and atmospheric chemistry to the equation. The addition of these elements allowed the researchers to see how the radiation from the star might interact with the planet's atmosphere.

Their findings highlight how important an understanding of the star's radiation is and how it affects any water content on the surface. But it also highlighted how poorly thin ozone layers control the reach of ultraviolet radiation.

"3D photochemistry plays a huge role because it provides heating or cooling, which can affect the thermodynamics and perhaps the atmospheric composition of a planetary system," Chen said. "These kinds of models have not really been used at all in the exoplanet literature studying rocky planets because they are so computationally expensive. Other photochemical models studying much larger planets, such as gas giants and hot Jupiters, already show that one cannot neglect chemistry when investigating climate."

The researchers believe their work may help narrow the focus for future telescopes, such as the James Webb Space Telescope, when they are searching for potentially habitable planets and characterizing their atmospheres.

"There are a lot of stars and planets out there, which means there are a lot of targets," said Daniel Horton, senior author of the study and assistant professor of Earth and planetary sciences at Northwestern University. "Our study can help limit the number of places we have to point our telescopes."

Horton said some of the the biggest challenges have been adapting Earth-based models to apply towards exoplanets. But the results could inform targeted searches by the JWST, which can detect water vapor and ozone.

"'Are we alone?' is one of the biggest unanswered questions," Chen said. "If we can predict which planets are most likely to host life, then we might get that much closer to answering it within our lifetimes."