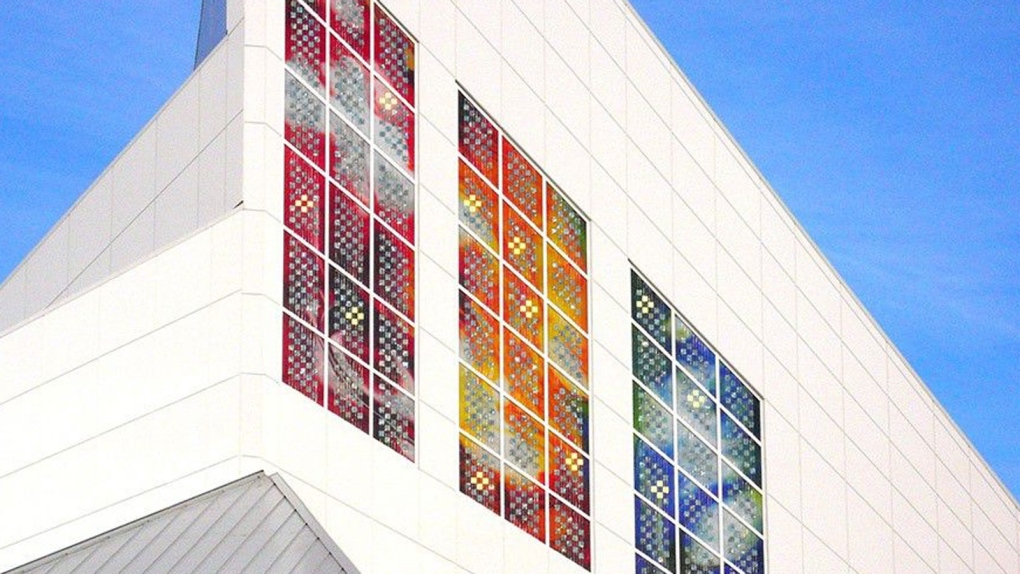 A new type of stained glass just installed in a Saskatoon cathedral is trying to prove green can also be glorious, combatting the stereotype of ugly, bulky solar panels.

When the Cathedral of the Holy Family needed a new set of stained glass windows, Toronto artist Sarah Hall jumped in with a project she's been working on since 2005 -- one that combines old art techniques with new technology.

Working with engineer Christof Erban, who pioneered the concept of placing a solar cell between layers of glass, Hall's solar-infused masterpiece is a colourful set of three giant windows set atop the Saskatoon church.

The work is called "Lux Gloria," or "Light of Glory," and the largest of the three windows measures 37-feet high by 12-feet wide. The windows -- a display of silver solar cells fused with various colours of stained glass -- simultaneously shade the church, harvest solar energy from outside and block out heat.

While the Saskatoon project is just one example of Hall's work in the field of building-integrated photovoltaics (BIPV) -- her first installation went up in Washington, D.C., in 2005 -- the Lux Gloria is the first of her pieces that feeds back into a city's electrical grid. She has also worked on two projects in Toronto, one in Vancouver and one in Camas, Washington.

Hall's studio said the embedded solar panels are capable of generating 2,500 kilowatt hours of power each year, or about 20 per cent of the electricity used per year in the average Canadian household.

However, it is likely that the power will be used by the cathedral itself.

In a statement, Hall says the Saskatoon installation is the "first cathedral in the world to incorporate solar energy collection into its stained glass windows, bestowing a threefold gift of beauty, inspiration and preservation of world resources."

Hall started the Lux Gloria project by sketching three full-sized drawings, which were sent to a manufacturer in Paderborn, Germany, where large sheets of glass enamels were airbrushed by hand. The glass was tempered before 1,013 polycrystalline solar cells were soldered in by hand, coloured silver to match the artwork and then permanently embedded. Each solar panel is a different size and shape to add aesthetic appeal.

While solar panels are usually hidden away on buildings' roofs, Hall hopes that calling attention to them will create awareness of the ease of harvesting solar power.

Hall is the first North American artist to specialize in BIPV, but she hopes her work will open doors to further energy conservation options.