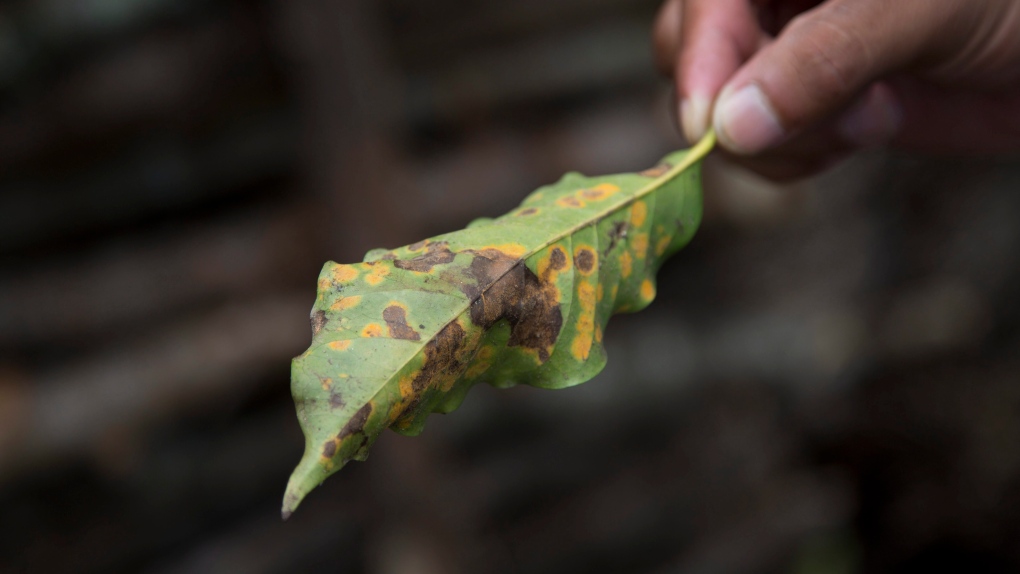 In this May 22, 2014 photo, coffee producer Alexander Illescas shows a coffee leaf that has damage from the coffee rust fungus in Ciudad Vieja, Guatemala. The airborne disease strikes coffee plants, flecking their leaves with spots and causing them to wither and fall off. (AP Photo/Moises Castillo)

TORONTO -- Your morning cup of coffee could become more expensive thanks to a disease that is being spurred on by climate change.

Coffee rust, a colloquial term for a fungal disease, has a taste for coffee trees – specifically the leaves.

According to University of Guelph professor Stuart McCook, a complicated series of economic and environmental factors surrounding the problem of coffee rust could result in significantly higher coffee prices for North American consumers, while also threatening the livelihoods of many coffee producers and workers.

“I think the coffee rust is for me a good way of thinking about the kinds of things that we can expect out of climate change,” University of Guelph professor Stuart McCook told CTVNews.ca in a phone interview.

‘Coffee is Not Forever: A Global History of the Coffee Leaf Rust,’ is the book that McCook has been working on for over a decade, detailing the ways that the fungal disease has shaped the past and future of the coffee industry.

SO, WHAT IS COFFEE RUST?

Coffee rust begins life as a miniscule spore, as small as grains of baking flour.

“The spore lands on the leaf or the tree and in the presence of water droplets, it sends shoots inside the tree and basically starts to feed off the leaf tissue,” McCook explained.

Leaves infected by the spores develop lesions and drop off of the tree.

Since the tree gathers its nutrients from sunlight caught and processed through photosynthesis in the leaves, over the short-term, this means the coffee fruit can develop poorly, or not develop at all, McCook said. But over the long-term, a bad outbreak of coffee rust can damage the development of tree branches themselves, leading to weaker trees and a smaller yield of product the next season.

This means that a plantation can be affected negatively by coffee rust for years after it is first struck with it.

Coffee rust was first detected 150 years ago in what is now known as Sri Lanka, McCook said. At the time, coffee was one of the area’s largest exports. But coffee rust devastated their coffee production.

“Between about 1869 and the 1970s, (the disease) slowly spread through almost every single coffee growing zone in the world,” McCook said. “And they either basically abandoned coffee all together, like the growers in (Sri Lanka) did and switched to tea, which now, of course, Sri Lanka is famous for, or they developed some way of coexisting with the disease.” 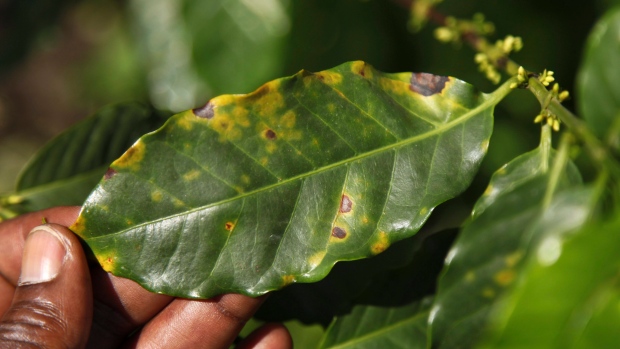 When McCook started writing his book in 2004, he assumed that coffee rust was like the flu -- a sometimes dangerous nuisance that human beings have learned to manage, for the most part, and to live with.

But then came along climate change.

“The fungus is incredibly sensitive both to rainfall and to temperature,” McCook said. “Changes of just a fraction of a degree and the diurnal temperature range -- the difference between the warmest and the coolest temperature -- can allow a number of additional generations of the fungus to survive.”

McCook says rainfall patterns and temperatures have changed “in ways that triggered a cluster of outbreaks, particularly in Latin America.”

These outbreaks started around 2007, and were so devastating that they are sometimes referred to as ‘The Big Rust.’

Thousands of hectares were affected, and some farms lost up to 80 per cent of their production.

Some countries rebounded stronger than ever from this outbreak. Colombia, the world’s third-largest coffee producer, created a new generation of high-quality hybrid coffee, and replanted. But it couldn’t happen overnight.

“So after about five or six years, I think, after the initial outbreak,” McCook said, “once they dug up the susceptible coffees and replanted the new coffee, they were producing more coffee than ever before.”

But more outbreaks struck central America from 2012 to 2015, McCook said. And the impact of those are still being felt today. 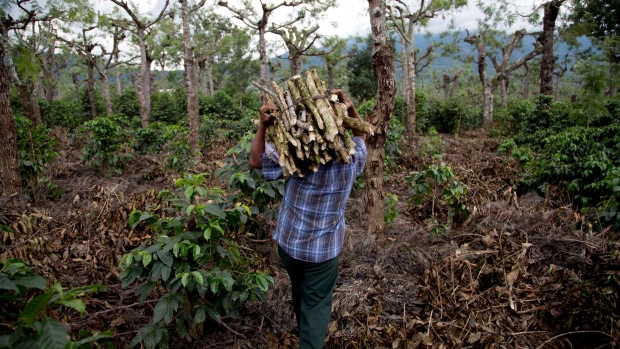 Although it used to be regulated, the coffee industry switched to a free market in 1989, McCook said. So it hasn’t been unusual for the coffee world to have booms and busts, with demand sometimes outpacing supply.

McCook said that it can be more expensive for farmers and landowners to fight coffee rust than to simply abandon the coffee industry completely. Farmers looking to cut costs when prices take a dive might skip on fertilizers or pesticides that protect their trees.

McCook added that there often isn’t an easy backup product for farmers to switch.

“One of the things that you might decide to do if you're a broke coffee farmer for whom there's no other crop really to switch to, or even if there is, you can't afford to switch to it, you might just decide to pack up and go look for work,” McCook said.

But it’s not just landowners who are losing when coffee rust and a difficult market arise. The most vulnerable people, McCook said, are the labourers.

Altitude is a big indicator of whether an area will be impacted by coffee rust, McCook said. Lower altitudes have been hit harder than others.

But in many of the countries that traditionally grow the crop, to plant coffee at higher altitudes would mean clearing away tropical forest. Or it could mean moving into areas where other farmers are growing different crops -- farmers who may not want to swap over to coffee production.

“The amount of land suitable for growing coffee is projected to diminish by about 50 per cent in the next few decades,” McCook said, citing recent research he had read. He added that “at the same time, global coffee demand is projected to increase by about a third by mid-century.”

Brazil has largely been spared from the outbreaks, but while it is the world’s largest coffee producer, it is not as known for high-quality coffee as some other countries, such as Colombia, McCook said. So coffee rust is a bigger problem for consumers who care about specialty coffee blends than those who buy their coffee beans from the supermarket.

With so many swirling factors complicating the coffee industry -- climate change spurring on coffee rust, which can make continual farming expensive, particularly during a rough season for coffee economically -- it's no surprise that coffee prices are projected to rise significantly for consumers, according to McCook.

“It could conceivably go up a lot,” he said.

This doesn’t mean that things are over for Canadian coffee drinkers, or that prices will jump to $15 for an espresso shot in Toronto in the next five years. Scientists and market experts are looking for ways to move forward and tackle the new challenges facing the coffee industry and the workers who produce it. 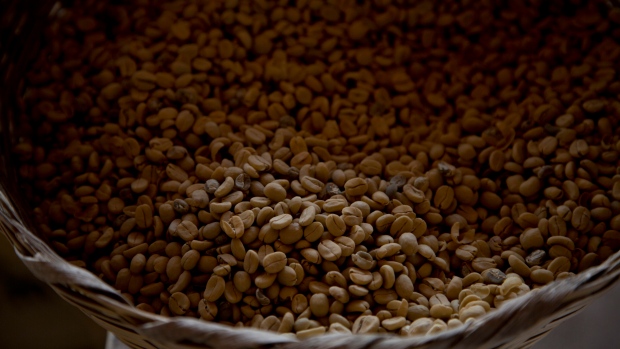 HOW COFFEE PRODUCTION CAN AVOID DISASTER

World Coffee Research is an organization that is focused on studying diseases and pests affecting coffee production, such as coffee rust, as well as breeding new types of coffee that are stronger than those before them.

Rust resistant crops were first developed in the 1980s. They were a cross between the much-sought-after Arabica bean and a second type called Robusta. Robusta, while better at handling coffee rust, is also not as tasty as Arabica, according to McCook.

“Robusta is often used in instant coffee,” McCook said. “For a country like Colombia, whose whole business model is based on producing good tasting coffee, this is a bit of a problem.”

More recent hybrid crops created in the last 10 years have done better on the taste front, but it’s an ongoing process.

McCook says work done by WCR “offers … a considerable cause for hope,” but that it’s not the only thing that needs to be done.

“I think what's going to be necessary for a lot of (the) coffee industry in Latin America to survive -- and also globally -- is a measure of support from either government organizations or international development organizations that can offer farmers the credit they need to switch to these new varieties, and also the technical support that they'll need to do it as well. You have to, ideally, train them how to work with these new varieties.”

What frustrates McCook is the way that North American media and consumers often focus solely on how diseases such as coffee rust affect the price of their own cup of joe, rather than how it affects the people who depend on coffee not as a caffeine boost at the start of a workday, but as their source of income.

“The coffee that we enjoy depends on the producers being able to have a viable and sustainable livelihood,” McCook said. “We should be caring about them and their lives.”