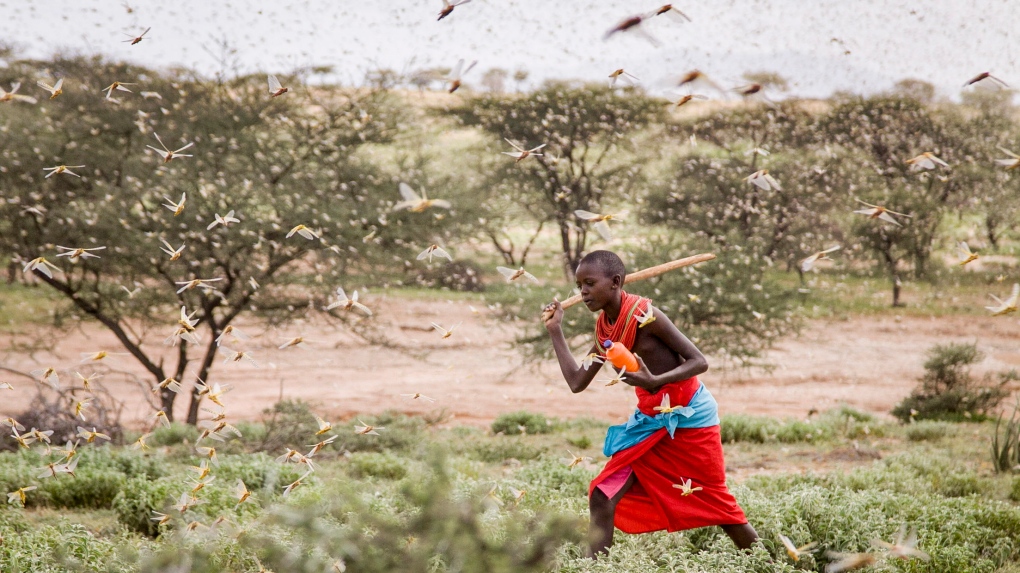 In this photo taken Thursday, Jan. 16, 2020, a Samburu boy uses a wooden stick to try to swat a swarm of desert locusts filling the air, as he herds his camel near the village of Sissia, in Samburu county, Kenya. (AP Photo/Patrick Ngugi)

JOHANNESBURG -- Locusts by the millions are nibbling their way across a large part of Africa in the worst outbreak some places have seen in 70 years. Is this another effect of a changing climate? Yes, researchers say. An unprecedented food security crisis may be the result.

The locusts "reproduce rapidly and, if left unchecked, their current numbers could grow 500 times by June," the United Nations says.

Here's a look at what's going on and where the voracious insects might be going next.

The swarms of desert locusts hang like shimmering dark clouds on the horizon as they scour the countryside in what are already some of the world's most vulnerable countries, including Somalia. Roughly the length of a finger, the insects in huge numbers are destroying hundreds of thousands of acres of crops and forcing people in some areas to bodily wade through them.

"A typical desert locust swarm can contain up to 150 million locusts per square kilometre," the East African regional body, the Intergovernmental Authority on Development, has said. "Swarms migrate with the wind and can cover 100 to 150 kilometres (62 to 93 miles) in a day. An average swarm can destroy as much food crops in a day as is sufficient to feed 2,500 people."

Alarm and exasperation mix with curiosity as people try to shoo the locusts away by shouting, waving pieces of clothing or banging on sheets of corrugated metal.

"These things here, they came to us from Ethiopia and are destroying everything along the way including our farm," said Esther Ndanu in the Kenyan village of Ngomeni. "We want the government to move very quickly to bring the plane to spray them with the medicine that can kill them, otherwise they will destroy everything." 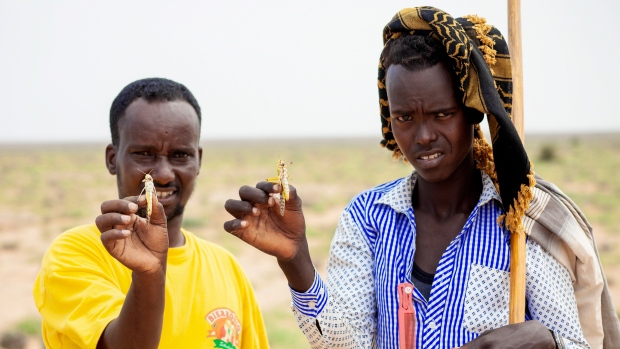 WHERE IS THIS HAPPENING?

"It's the worst that we've seen in Ethiopia and in Somalia in 25 years," she added, noting extensive damage to crops. Millions of people in both countries already cope with the constant risk of drought or flooding, as well as deadly unrest in Ethiopia and extremist attacks in Somalia.

Now South Sudan, struggling to emerge from a civil war, and Uganda are bracing for the locusts' arrival.

"Uganda has not had to deal with a locust infestation since the `60s so there is concern about the ability for experts on the ground to be able to deal with it without external support," Marchesich said. "And in a country like South Sudan, already 47% of the population is food insecure."

This week Uganda's prime minister told agriculture authorities that "this is an emergency and all agencies must be on the alert," the government-controlled New Vision newspaper reported. 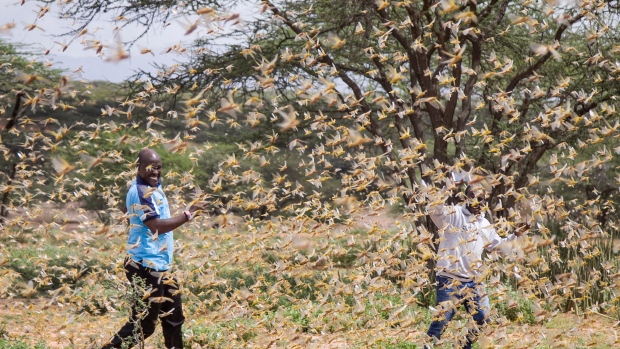 HOW IS CLIMATE CHANGE INVOLVED?

Heavy rainfall and warmer temperatures are favourable conditions for locust breeding and in this case the conditions have become "exceptional," he said.

Even now rainfall continues in some parts of the vast region. The greenery that springs up keeps the locusts fuelled.

"Countries are trying to prepare but this took them by surprise," Babiker said.

The further increase in locust swarms could last until June as favourable breeding conditions continue, IGAD has said. But Babiker said it is hard to say for sure when this outbreak will be over.

"This has become psychologically pressurizing," he said, delicately.

Major locust outbreaks can be devastating. One between 2003 and 2005 cost more than $500 million to control across 20 countries in northern Africa, the FAO has said. It caused more than $2.5 billion in harvest losses.

"But that is not enough," Marchesich with the FAO said of monitoring and control measures. "We also have to have anticipatory approaches to safeguard the livelihoods of the farmers and the agriculturalists."