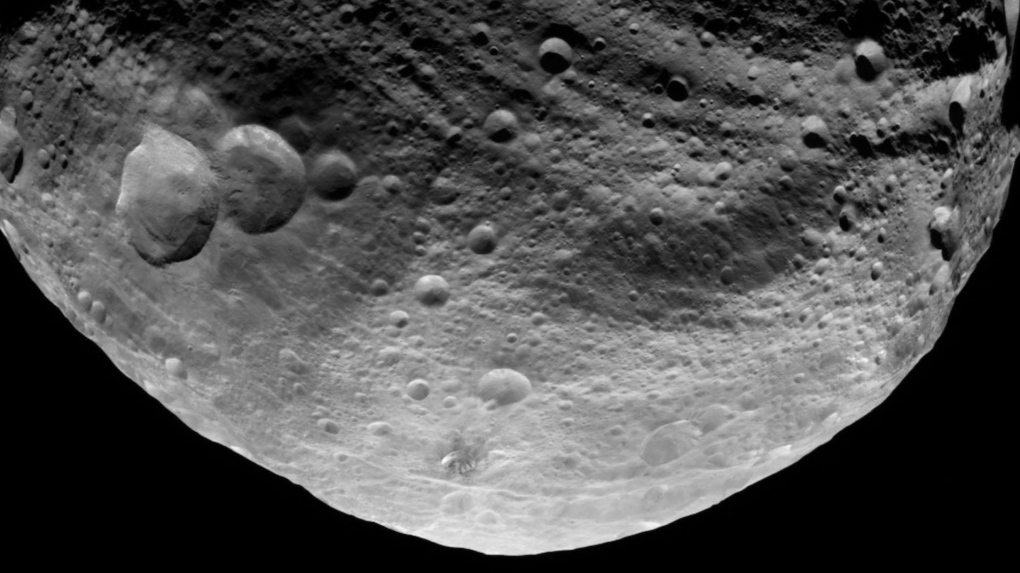 This undated image released by NASA and taken by the NASA Dawn spacecraft shows the south pole of the giant asteroid Vesta. Vesta is much larger than the new asteroid that shot by Earth this Friday, 2019 NJ2. (AP Photo/NASA)

An asteroid was expected to travel closely past the Earth on Friday, but according to data collected by the Center for Near Object Studies, this extraterrestrial tourist is only one of many.

The Center for Near Object Studies (CNEOS) tracks, as the name suggests, near-earth objects (NEOs, for short). A near-earth object is an asteroid or comet that will be passing close to the Earth’s orbit as it hurtles through space, tugged about by the gravitational pull of the planets and objects around it.

Although it sounds frightening, the Earth has likely had millions of NEOs streak safely past it over its long, long lifetime -- what is considered “close” in astronomical numbers is far from what the average person would expect.

This newest asteroid will be between 5 million and 5.1 million kilometers away from the Earth at its closest brush with our planet.

The asteroid is classified as an Apollo, which is a type of asteroid that crosses Earth’s orbit in a fashion similar to the first asteroid given that name, which was discovered in 1862. Apollo-type asteroids have orbital patterns larger than Earth’s, but they cross over the same path that Earth travels around the sun.

But how often do asteroids pass by us as we spin unaware through the cosmos?

CNEOS has records on their website dating back to 1970 that update the cumulative total of known NEOs every month. The most recent cumulative data is from July 15, 2019, and lists 20,552 as the number of NEOs the Center has observed since starting to take records.

More than 500 asteroids have passed within 7.5 million km of the Earth this year since January alone.

Asteroids are only classified as PHAs (potentially hazardous asteroids) by CNEOS if they are not only passing closer than 7.5 million km to the Earth, but are also large enough to do significant damage if there was an impact. Asteroids under 140 metres in diameter fall below the cut-off, so our new asteroid -- at a measly 63 metres diameter according to the highest estimation -- is not going to be causing any dinosaur-level extinctions anytime soon.

Although the vast majority of these NEOs do not pose a high threat level to the Earth, NASA did warn us this past May that meteors could be more dangerous than we think. In December of 2018, a meteor exploded over the Bering Sea with a force 10 times that of the Hiroshima atomic bomb, but was largely unnoticed due to the remote location.