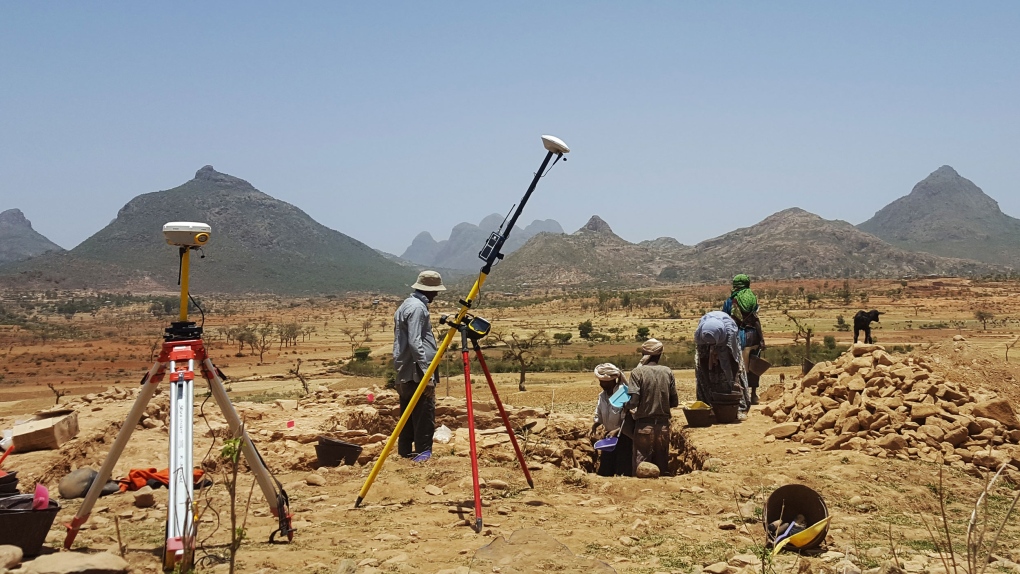 Archeologists have unearthed the remains of a town that was inhabited for some 1,400 years before vanishing into the dusty highlands of northern Ethiopia around AD 650. (Credit: Ioana Dumitru)

Archeologists have unearthed the remains of a town from an influential but little-known ancient civilization in East Africa that sheds light on the origins of Christianity in Ethiopia.

The buried settlement, which contains one of the oldest churches in sub-Saharan Africa, was inhabited for some 1,400 years before vanishing into the dusty highlands of northern Ethiopia around AD 650.

Called Beta Samati, it was part of the Empire or Kingdom of Aksum, but prior to its discovery archeologists thought the area had been abandoned when the empire's ruling class set up its capital elsewhere.

The Kingdom of Aksum ruled over the region between 80 BC to AD 825 and was one of the ancient world's major powers -- conquering surrounding regions and trading with the Roman Empire, the researchers said. The kingdom converted to Christianity in the 4th century.

It was only in 2009 when archeologists spoke to local residents in the area near the discovery, who suggested the researchers investigate a hill near the modern village of Edaga Rabu. It turned out to be a 25-meter high mound formed by waste and debris accumulated over generations of occupation.

Radiocarbon dating suggests people first started living in the town around 750 BC, and it remained occupied throughout Aksumite times, capturing key moments in Ethiopian history.

The buildings and artifacts uncovered, which include a basilica, gold ring, coins, inscriptions and pottery, have revealed the region remained important throughout Aksumite times and the town of Beta Samati was a key hub of trade and commerce, linking the capital Aksum with the Red Sea and beyond.

Today, the town lies near Ethiopia's border with Eritrea.

"The Empire of Aksum was one of the world's most influential ancient civilisations, but it remains one of the least widely known," said Michael Harrower, associate professor of archeology at Johns Hopkins University and lead author of the research, which was published in the journal Antiquity on Wednesday.

"Beta Samati spans Aksum's official conversion from polytheism to Christianity and the rise of Islam in Arabia," said Harrower.

The archeologists uncovered the remains of a large basilica dating back to the fourth century.

Such buildings were key early places of Christian worship in Ethiopia, the study said, and the site at Beta Samati appears to be one of the first in the Aksumite kingdom, the researchers said -- built shortly after King Ezana converted the empire to Christianity during the mid-fourth century AD.

"(This find) is to my knowledge the earliest physical evidence for a church in Ethiopia," as well as all of sub-Saharan Africa, Aaron Butts, a professor of Semitic and Egyptian languages at Catholic University in Washington, DC, told the Smithsonian magazine. He was not involved with the excavation.

Relics uncovered at the site showed Roman, pagan and Christian influences, illustrating the "cultural diversity of this enigmatic civilization," the study said.

They included a gold Roman-style ring that featured an unusual icon -- a symbol of a bull and a soft-stone pendant recovered from outside the basilica with what appears to be an inscription in ancient Ethiopic that reads "Venerable Cross."