Early in the COVID-19 pandemic, much attention was put on Canada’s insufficient emergency stockpile of pandemic necessities such as personal protective gear, following years of mismanagement.

Canada established a National Emergency Strategic Stockpile (NESS) in the 1950s to have equipment on hand to protect Canadians from the threats of the Cold War.

In the decades since, the focus has been on ensuring there is an arsenal of supplies that may be needed in emergency situations and contains “items that are rare and difficult to obtain in a timely manner.”

However, after disposing of numerous supplies that had expired and failing to keep track of what it had in storage, the Public Health Agency of Canada (PHAC)—which manages the stockpile—struggled to meet the surging demand for personal protective equipment (PPE) at the outset of the ongoing COVID-19 crisis.

In response, the federal government promised to revisit its supply management and said it would effort to use up items before they expire. PHAC also agreed to make a series of changes “within one year of the end of the pandemic.”

So, with the need for emergency access to these essential supplies ongoing, has the government been squirreling away PPE for the stockpile, or is it just continuing to roll out its bulk medical supply and equipment shipments to the provinces and territories as they arrive?

According to PHAC, it’s doing both right now: sending out supplies on a per capita basis, while setting aside the surplus to be accessed in case of a compounding emergency.

WHAT IS IN THE STOCKPILE?

In addition to other essential supplies ranging from cots to antidotes for biological weapons, according to PHAC as of Jan. 19 the stockpile includes approximately:

This snapshot of what’s in storage is subject to change, PHAC cautioned, because the federal government continues to distribute PPE to the provinces and territories as well as receive new deliveries. What is in storage is also a fraction of the more than 2.7 billion pieces of PPE the government has procured over the course of the pandemic.

This flow of supplies is mindful of the need for an “enhanced pandemic supply for additional surge support,” the agency said, adding that it’s “monitoring supply chains closely to inform the NESS procurement posture.”

In the last two years the government also expanded its warehouse capacity to store the surge in bulk orders of supplies it’s been receiving, though PHAC said the extra storage space is temporary. 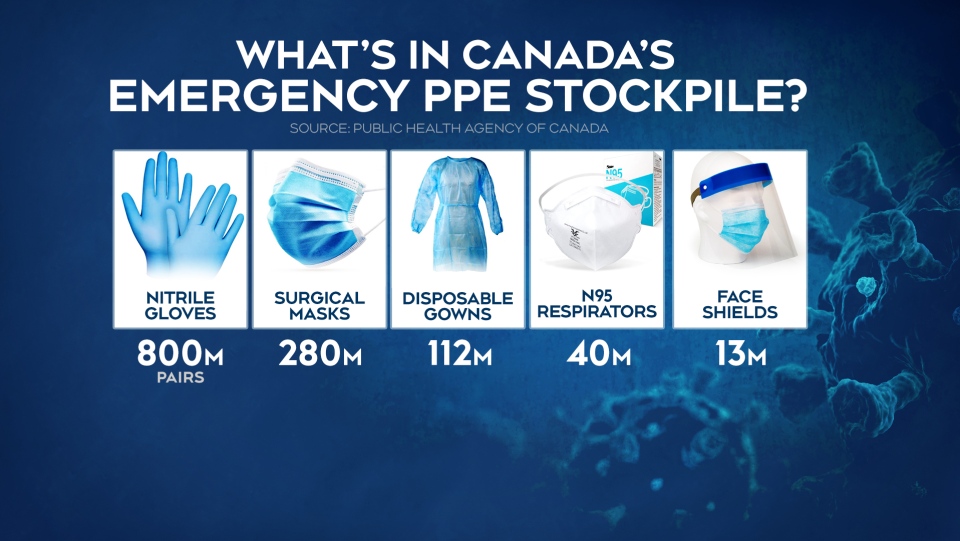 HOW MUCH IS DOMESTICALLY PRODUCED?

As part of Canada’s early pandemic scramble for supplies, the federal government made a callout asking Canadian businesses and manufacturers to pivot their manufacturing capabilities to produce personal protective equipment to boost the health sector’s stockpile of life-saving supplies.

This retooling became a permanent business line for some, though questions have been raised about how much of Canada’s ongoing PPE procurement is coming from Canadian companies.

While the agency didn’t provide a specific percentage of the PPE being ordered that is coming from Canadian manufacturers, according to PHAC it’s receiving shipments of made-in-Canada PPE “on a daily basis,” including gowns, surgical masks, N95s and face shields.

COVID-19 vaccinations do not impair fertility in men or women, study finds