Dozens of Muslim philanthropic groups and several civil liberty organizations are urging Prime Minister Justin Trudeau to ensure that the Taxpayers’ Ombudsman office can access all the information it needs to conduct a systemic review of how the Canada Revenue Agency treats and audits Muslim-led charities, after a 2021 report accused the CRA of “implicit biases and practices.”

The National Council of Canadian Muslims (NCCM), an advocacy organization that has helmed the push for a review of the CRA’s practices, released an open letter signed by multiple organizations Tuesday, outlining their concerns in light of what the Taxpayers’ Ombudsman, François Boileau, recently said about the review before the Senate Committee on Human Rights.

“Unfortunately, we write to you today to suggest that the above review is inherently flawed,” the letter states.

In a statement issued on Nov. 21, Boileau said the CRA told his office it could not disclose certain parts of a charity’s file due, in part, to concerns about the release of information related to national security.

Boileau said the CRA’s inability to disclose information has made it “impossible” to complete the systemic review his office was tasked with conducting in the summer of 2021.

The open letter to the prime minister outlines three recommendations: that a review body be established to bring together the CRA and the departments of Finance and Public Safety for an examination of systemic Islamophobia and racism, that requisite clearances and legislative frameworks be addressed at the outset so the review can be completed in a timely manner, and that the CRA’s Review and Analysis Division (RAD) be suspended until further notice.

“The frustration for us, is that while this review is being figured out, about access to information, Muslim charities are going to continue to be subjected to this [audit] experience. And that is the bigger problem,” Nadia Hasan, the chief operating officer at the NCCM, told CTVNews.ca in a phone interview.

Government policy experts and Muslim organizations told CTVNews.ca that the stalling of a crucial equity review of a powerful government financial agency reveals significant transparency barriers in understanding practices of the CRA, that will continue to impact Muslim people in Canada. They say the issue is indicative of serious flaws in policy and prevents the government from moving toward a more equitable framework for Canadians, especially as the country will only become more diverse with increased immigration.

In a statement to CTVNews.ca, the CRA said it takes concerns about systemic racism and discrimination ‘very seriously’ and has been working to support the ombudsperson’s review of its practices.

Two reports were published last year that alleged the CRA has targeted Muslim charities in audits. Tax audits are reviews the CRA conducts to ensure that a charity is complying with the Income Tax Act.

The academics and policy experts who wrote these reports said those audits were steeped in discriminatory and biased practices that are embedded within the institution.

One of the reviews published, conducted by the National Council of Canadian Muslims and the University of Toronto, found the government’s “risk-based assessment” (RBA) model used in anti-terrorism financing policy disproportionately targets racial minority communities and Muslim organizations.

The audits of the charities are based on “little more than stereotypes about race, religion and proclivity to violence,” the report states.

That report and others called on the federal government to investigate how the CRA conducts audits of Muslim charities and suspend RAD. Following the National Summit on Islamophobia in July 2021, where speakers emphasized concerns about the CRA’s auditing process, Minister of National Revenue Diane Lebouthillier tasked the Office of the Taxpayer’s Ombudsperson with conducting the review. The mandate of the Taxpayer’s Ombudsperson is to improve the CRA’s services and the office works independently from the agency.

Several months later, that review of the auditing process is currently impeded by missing information, Boileau said in his Nov. 21 statement.

Boileau said his office is trying to determine how the CRA selects charities for audits, and it's “impossible” to validate that information with what the CRA has currently provided.

Section 241 of the Income Tax Act, which outlines privacy provisions that prevent the government from sharing taxpayer information unless it meets criteria under the Act, is understood to be of “paramount importance,” he said.

Boileau said his office has engaged with the CRA and Department of Justice to explore if there are “viable alternative options” considering the restrictions to sharing information implemented under the Income Tax Act.

But the CRA has indicated that it has its own policies around not disclosing information regarding the risk assessment process for charities, separate from the Act, Boileau wrote. That information around risk assessment is “crucial” to properly answer the core questions of his probe, he said.

“Public expectations regarding this review are very high,” he said. “I find it important to be as transparent as possible with the Canadian public.”

‘WHO IS WATCHING THE CRA?’

Anver Emon, the director of the Institute of Islamic Studies at the University of Toronto and one of the co-authors of the academic review of the CRA’s practices, said there is a “fundamental accountability problem” when a government agency cannot provide information to a government-ordered review.

“This is a governance problem, about how representative is our taxing agency to the democratic public, who are taxpayers. More troublingly, this is not just any review. This is a review on equity grounds,” said Emon in a phone interview with CTVNews.ca.

“Who is watching the CRA? If it’s always an internally kept shop, there’s no light to shine,” he said.

When the review was called last year, the NCCM made it clear that it needed to be done with “integrity and rigour,” said Hasan in a phone interview.

The Ombudsperon’s office has made it “pretty clear the barriers we thought might be there are indeed there,” she said. “We do need the government to step in and actually take action, in terms of making this review successful.”

The impact of the current CRA audit process has been felt by the Muslim community for many years, in curbing organizations’ abilities to provide aid and undermining their legitimacy, said Hasan. These charities provide aid to food banks, mosques, women’s shelters and humanitarian associations, she said.

THE POLICIES THAT INFORM THE CRA AUDITS

Emon said tax specialists are not anti-discrimination specialists nor do they have an expertise in eradicating racism, which is why a review like this one is crucial.

The CRA is using policies that were created during a period of moral panic post-9/11, and are inherently biased toward Muslims and that needs to be fixed, he said.

Following 9/11, the Financial Action Task Force, an intergovernmental policy-making global group that sets international standards to combat money laundering and terrorism financing, introduced recommendations around monitoring non-profit organizations for terrorism funding, due to a “exaggerated and generally debunked” belief that Osama bin Laden was pouring money into al-Qaeda, according to the University of Toronto and NCCM report.

Canada is a founding member of the Task Force and is keen to follow its recommendations, the report states.

In 2015 the federal government completed a self-assessment on money laundering and terrorism financing in Canada, ahead of a routine Task Force evaluation of its policies. In that assessment,100 per cent of terrorism threats to Canada were deemed to be posed by racial minority groups, the UofT report points out.

That is despite concerns about domestic threats from white supremacy groups like the Proud Boys, which were added to the government list of terrorist entities in 2021. 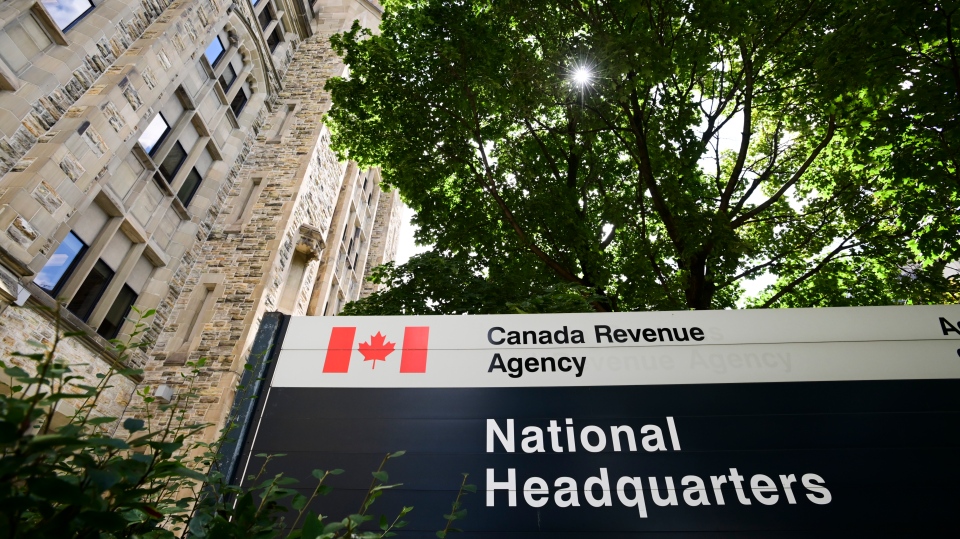 Another 2021 report by the International Civil Liberties Monitoring Group,a coalition of civil society organizations, found that between 2008 and 2015, RAD completed audits of 16 charities, and eight of those charities had their status revoked. Of those eight, six were Muslim charities.

The report states that, in the aftermath of the Sept. 11 attacks, the Canadian government created new anti-terrorism policies that gave security agencies “sweeping new powers” that have been criticized for undermining human rights, for over two decades. An example of this is the amendment to the Proceeds of Crime Act to include terrorist financing in December 2001.

The updated legislation allowed the CRA to deregister charity organizations upon presentation of a case to the judge, Emon said.

The CRA has stated it has not used that legislation, said Emon. However, he points to 2016 testimony before the Senate, where CRA agency officials said the CRA adopts a “nuanced approach” and makes clear that an organization could be audited if there is information from other sources that “suggests” a charity is providing funds to a “foreign organization” that could be linked to terrorism.

At the Senate Human Rights Committee on Monday, CRA officials were questioned by senators who are studying Islamophobia and its role in online and offline violence against women, gender discrimination and workplace discrimination.

Geoff Trueman, the assistant commissioner of the CRA, told the committee that audits focused on terrorist financing represent a “small portion” of the audit program, amounting to 0.5 per cent of audits.

In response to questions regarding the findings of the International Civil Liberties Monitoring Group, Sharmila Khare, the director general of the charities directorate, legislative policy and regulatory affairs branch at the CRA, said the framework the agency follows with regards to audits is one established by the government.

Tim McSorley, co-ordinator of the International Civil Liberties Monitoring Group and author of the group’s report, told CTVNews.ca in a phone interview that the CRA’s statements at the committee were “incredibly disappointing and frustrating.”

“There was an overall dismissiveness and refusal to acknowledge there’s a problem with the review and that the review is necessary,” said McSorley.

CTVNews.ca reached out to the CRA and to Lebouthiller’s office regarding the audit review process and concerns. The minister’s office did not respond.

In an emailed statement, the CRA said it is aware of the National Council of Canadian Muslims’ open letter and its recommendations.

“We know that systemic racism and discrimination are real and important concerns in Canada. The CRA takes these concerns very seriously especially when fulfilling our duties and is committed to protecting the charitable sector,” it states.

The CRA said it has supported the review conducted by the Office of The Taxpayer’s Ombudsperon by responding to all requests for information, sharing and explaining the Charities Directorate’s policies and procedures that inform risk assessment and audit selection, and explaining how those policies are implemented. The agency said it has also participated in “numerous interviews.”

McSorley said that although the number of CRA audits focused on terrorist financing is small compared to the overall audit program, audits targeting Muslim charities have significant equity concerns and have had a detrimental impact on the organizations involved. No charges have ever been laid against the charities, he said.

“The government needs to act, the prime minister needs to act in order to ensure there is an actual full and complete review of this issue,” he said.