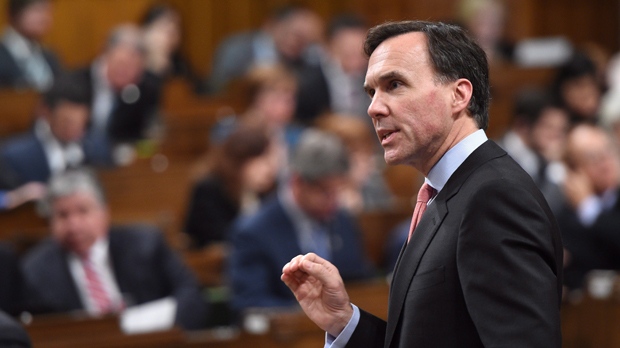 Minister of Finance Bill Morneau responds to a question during question period in the House of Commons on Parliament Hill in Ottawa on Tuesday, March 7, 2017. THE CANADIAN PRESS/Sean Kilpatrick

OTTAWA -- The federal finance minister is standing by the amount of money the Liberal government currently spends on defence, saying the military is "appropriately provisioned" to address Canada's needs.

In an interview Thursday with The Canadian Press, Finance Minister Bill Morneau left the door open to future "adjustments" depending on what ends up being included in the Liberals' new defence policy.

But his comments about the military's current funding levels are reason for worry among those expecting a significant injection of cash in the coming months.

Morneau also played down suggestions Canada is facing pressure to increase defence spending from Washington, where U.S. President Donald Trump has called on NATO allies to do more.

"They recognize very clearly how well we've worked together with our allies," Morneau said of a recent meeting with U.S. Defense Secretary James Mattis and U.S. Secretary of Homeland Security John Kelly.

"They talked about, in specific terms, how much of an impact Canada's military made in Afghanistan. I think we're recognized as being a country that is playing our part. We'll continue to do that."

This week's federal budget made little mention of the Canadian Armed Forces, aside from delaying $933 million in planned spending for new equipment by several years and nearly $8.5 billion over 20 years.

Otherwise, the budget deferred the decision to the government's forthcoming new defence policy, which had been expected earlier in the year but has been delayed as officials try to get a handle on the Trump administration's priorities.

Defence insiders and analysts have warned in the past few years that the military is being stretched thin by a lack of resources, resulting in cuts to maintenance and training and curtailed operation of ships, planes and other vehicles.

They say the situation is the result of deep budget cuts under the Conservatives starting in 2012, which were followed by small increases that haven't kept up with the military's increased pace of activity.

That includes substantial missions to Iraq, Ukraine, Latvia and, in the coming months, Africa, plus expanded responsibilities with regards to cyberdefence and space.

There are also concerns about the amount money available over the long term for promised new equipment, with some analysts putting the shortfall in the range of billions of dollars per year.

Morneau said the government knows it must provide adequate funding to keep the military strong and well-equipped to meet Canada's needs, but he rejected suggestions it is at risk of being hollowed out.

"We do have an envelope for defence spending that we believe allows us to continue to deal with the defence priorities that we have," he said.

"We at this stage believe that we have appropriately provisioned for our defence spending, and we'll look at that defence policy review to consider whether any adjustments are required."

The military "won't be a place where we don't make adequate investment," he added.