Laureen Harper slams cougar hunter as 'creep' who 'must be compensating'

Former prime minister Stephen Harper’s wife joined the chorus of online backlash against a Canadian TV personality who bragged about killing a cougar in northern Alberta.

Steve Ecklund, the host of the outdoor enthusiast show “The Edge,” posted several photos earlier this month showing him holding the dead animal, and another of him cooking a stir-fry with the meat.

Laureen Harper took to Twitter on Wednesday night to express her distaste for the hunter, calling him a “creep” and suggesting his behaviour may have been the result of a masculine shortcoming. 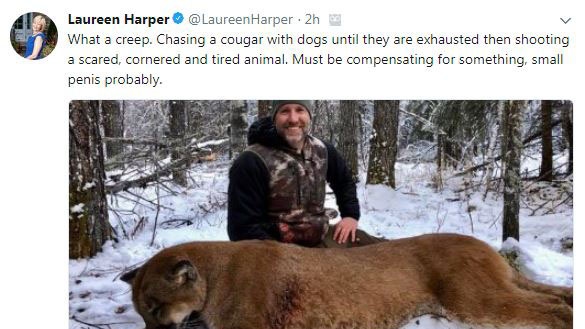 Harper’s response provoked reactions online ranging from support to surprise at such blunt language from the wife of a former prime minister.

“Laureen? I honestly must admit, I never expected you to speak so boldly. Luv it!” wrote one user.

Another said, “Laureen! Who knew you were such a badass?”

Harper responded to a user who worried her account had been hacked, writing “Wasn’t hacked. I was really angry that some guy flies all the way to Alberta to kill a magnificent cougar, so he can make a stir fry.”

Wasn’t hacked. I was really angry that some guy flies all the way to Alberta to kill a magnificent cougar, so he can make a stir fry. https://t.co/m4skcCGjZ4

Never thought I would see the day when I would happily RT Laureen Harper...but there we go...

This is what winning the internet looks like. Well said @LaureenHarper https://t.co/8BPgLMEqH7

Major disappointment with your comments. Attacking a law abiding citizen. Too much city time maybe. Educate yourself on responsible hunting.

I know many people find this offensive, but the money from hunting licensing goes mostly to wildlife support programs. Cougars are also extremely effective hunters themselves. They kill cows, horses & pets when opportunity arises. They'll go after people too when it suits them.

And in an unexpected twist, Laureen Harper is my new favourite person right now. https://t.co/MraYudnVh3