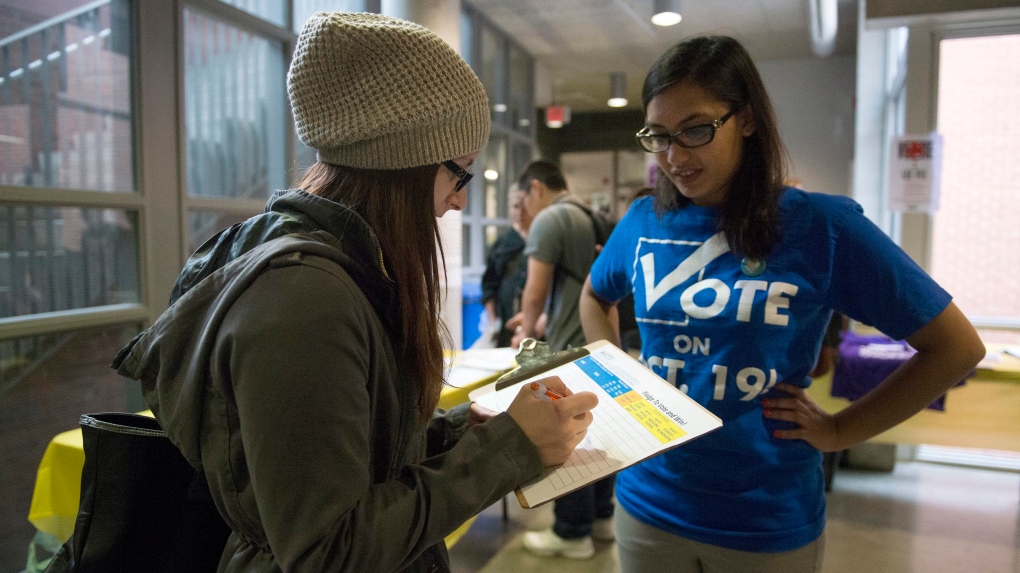 OTTAWA -- Caro Loutfi is busy at her Montreal office preparing ways to get young voters to cast a ballot in this fall's federal election.

Loutfi is the executive director of Apathy is Boring, a non-partisan organization that works to educate young voters and get them involved in politics.

Until the 2015 federal election, turnout among the country's young voters -- those between the ages of 18 and 24 -- had been on a long-term decline since the 1970s.

With another vote scheduled for October, Loutfi and 400 other groups and activists are organizing events in the coming weeks to ensure the ground gained in 2015 with young Canadians isn't lost on Oct. 21.

Their work culminates with a day of action on Sept. 15 that Apathy is Boring styles on its website as the largest, non-partisan voter engagement campaign in Canadian history.

"It's important to maintain that momentum to ensure that diverse voices are actually taking part in deciding who governs our country," Loutfi said.

Elections Canada data from the 2015 election showed that 57 per cent of voters aged 18 to 24 cast a ballot, an increase of 18.3 percentage points from the almost 39 per cent recorded in the 2011 election. The increase was the largest the elections agency has recorded since it began reporting demographic data in 2004.

Four years on, those voters have aged and new voters are coming of age to cast a ballot. The so-called millennial generation, which includes those 18 to 34, will account for just over one-quarter of voters in this election -- making them a potentially powerful voting bloc in 2019 and beyond as they reshape politics just as the baby boomer generation before them.

A survey this year from the Samara Centre for Democracy found that 71 per cent of youth said they were interested in federal politics, adding that young people are "among the most active participants" in Canadian politics, including through their activism.

But the findings from the Toronto-based non-profit don't mean those young electors will turn out to vote on Oct 21.

Jon Parker, a political science professor at Algonquin College in Ottawa, said the increased turnout in the last election was largely driven by work the Liberals, in particular, did to target young voters. Research conducted by Abacus Data on behalf of the Canadian Alliance of Student Associations following the 2015 vote suggested the party's efforts, and get-out-the-vote campaigns, helped the Liberals win the support of 45 per cent of young voters.

Parker said hasn't seen any indicators that show excitement or interest among young people about this fall's election. He said the issue is a lack of civic literacy: Voters, particularly young people, don't have enough information that encourages them to vote.

"I'm really optimistic from 2015 results and the increase in young voter turnout, but it's not yet a pattern," said Parker, who worked on the Liberals' successful campaign four years ago. "I wouldn't be at all surprised if first-time voter turnout ΓÇª moves back down towards what has traditionally been more normal levels."

To ensure turnout remains high, Loutfi and her colleagues have dedicated their time to provide more information online and in person to young electors.

There is a "democracy dictionary" where first-time voters can find information about words they may not understand -- such as absentee ballot, canvassing and field liaison officer -- and an online tool that will help young Canadians find and get in touch with their local candidates. Apathy is Boring is also working with Elections Canada to train youth volunteers and send them to concerts, festivals and events to talk directly with and encourage young electors to vote.

Loutfi said getting more young people involved in the election will mean their issues are more likely to be reflected in party platforms.

"Politicians tend to not spend their time and energy on a non-voter," she said. "It creates a vicious cycle where you don't vote, politicians don't talk to you."