'We have to face it head-on': Canada's opioid crisis should be front and centre this election, advocates say 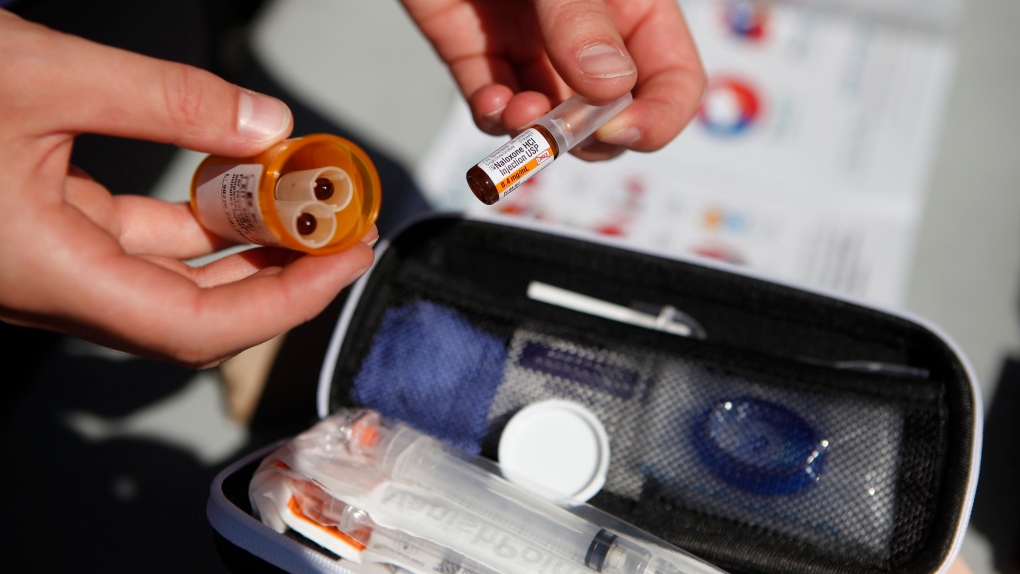 An organizer displays a naloxone kit that people can pick up for free as International Overdose Awareness Day training seminar takes place at Centennial Square in Victoria, B.C., on Saturday August 31, 2019. THE CANADIAN PRESS/Chad Hipolito

TORONTO -- Advocates and front-line workers in crisis and rehab centres say that Canada’s federal election should tackle the issue of the opioid crisis “head-on” as deaths skyrocket across the country.

In British Columbia, the situation has turned dire as drug users die at unprecedented rates from overdoses and toxic drug supplies.

“It’s just devastating,” said B.C.’s chief coroner, Lisa Lapointe, in a telephone interview with CTVNews.ca on Friday. “We experience five or six deaths every day as a result of the toxic drug supply in our province…these are people from all walks of life and all ages, every part of our province has a death rate of 30 per 100,000 due to drug toxicity, which is a massive increase over the last five years, when this public health emergency was first declared.”

Lapointe said that right now in B.C., drug toxicity is the leading cause of death for those 19 to 39 years of age.

Data from the B.C. Coroner’s Service shows that at least 1,011 deaths in the province since the beginning of the year are due to suspected drug overdoses.

“We struggle to find a system that helps people to wellness,” she said. “Right now, people are forced to purchase substances from the black market, which we know is toxic, which we know is profit-driven…the tragedy we see every day, the families, the pain in the faces of the families who have lost their loved ones to a preventable death…it’s shocking.”

The situation is dire enough that advocates are taking the federal government to court.

More than 21,000 people died of drug overdoses in Canada between 2016 and 2020, according to a lawsuit filed against the federal government in B.C. Supreme Court Tuesday, an effort from the Canadian Association of People Who Use Drugs to decriminalize the possession of illicit drugs.

Jennifer Horsnall, executive director of the Kapown Rehabilitation Centre, a First Nation-centred rehabilitation centre in Grouard, Alberta, told CTVNews.ca in an email on Friday that Canadians need to recognize that “anyone can become addicted” to opioids and that doctors need to be better educated on pain management.

“Kapown Rehabilitation was the only NNADAP (National Native Alcohol and Drug Abuse Program) treatment centre that was operational during the pandemic,” Horsnall wrote. “We increased our treatment beds from 32 to 42 to allow for more clients to access treatment during this time.”

Horsnall said the biggest issue facing her clients in rural Alberta is “the availability of proper detox and the shortage of treatment beds.”

“Our clients tell us that it’s difficult to access treatment without huge wait times, they also admit that not being able to access detox makes it difficult to be ready for treatment,” she said.

Horsnall also said she has seen a high rate of meth use during the pandemic, something she said was complicated by the “complex mental health issues that present within 7 to 10 days of not using.”

“Finding proper mental health supports is extremely difficult in rural Alberta,” she wrote. “Meth is becoming the next crisis and it is due to the fact that it is cheap and the high lasts longer.”

Amidst the pandemic, researchers at the University of Alberta found that deaths related to fentanyl overdoses have increased by 118.4 per cent, and opioids have continued to ravage communities from all walks of life in the province. The South-Sudanese community in Edmonton rallied outside the Alberta legislature last month to highlight the crisis.

“We ran away from warlords in South Sudan only to die here from drug lords…and that’s unacceptable,” said community member Mawien Akot to CTV News Edmonton.

In Ontario, six people per day died from an opioid overdose at the start of the pandemic, with data showing that emergency room visits and deaths from opioids increased 60 per cent in 2020 compared to 2019.

GAPS IN CARE SHOULD BE HIGHLIGHTED IN ELECTION: ADVOCATES

While any decision surrounding opioids and overdoses currently falls under the purview of the provinces and territories, there have been growing calls for a national strategy in the face of the crisis, and Horsnall wrote that the federal election is an opportunity to highlight gaps in Canada’s addictions care.

Particularly, Horsnall said, there is a great need for government-funded clinics to prioritize helping clients detox from drugs, which then gives them better footing to enter rehabilitation programs. “This is a huge issue as our clients need to detox before they are mentally, emotionally and physically ready to enter treatment,” she said

Horsnall said that Kapown adapted its programs when the pandemic hit to aid clients in detoxing before seeking treatment, but that funding allocated to COVID-19 will dry up sooner or later.

“Kapown created 14 isolation - stabilization beds when the pandemic hit, and this essentially ended up being detox,” she said. “Our reason for creating these beds was so that we could isolate and COVID test [our clients] before sending them to our treatment program.”

Horsnall said she found that once her clients actually made it to treatment after being detoxed, their completion rates increased from 50 per cent to 85 per cent.

“Unfortunately funding for this program was only approved for COVID, which is going to end when the pandemic ends…this is extremely disheartening and concerning,” she said. “If this pandemic has taught us anything it’s that the most vulnerable Canadians need proper access to detox, treatment and mental health services."

“If we invest in what works we will have better success in dealing with our opioid crisis.”

Lapointe said it is really important that every party pays some attention to “the fact that we are losing thousands of Canadians every year to substance related harms in every province.”

“There is not a national strategy,” she said. “It's really important that we have one, because these are our community members…I heard a mother say the other day (her son died of a drug toxic drug event) ‘we're not doing this for our kids. It's too late for our kids, but we're doing it for your kids.’ And I think that's a position that anybody in a position of leadership in this country needs to take, that we need to find some meaningful evidence based ways to reduce the significant harms our country is experiencing as a result of substance use.”

Lapointe said the country needs to move away from the old model of addictions health care and move toward an evidence-based model that fully supports people living with addiction and removes the stigma.

“Stop stigmatising people and pushing them into dark corners where they die alone,” she said.

Health Canada published two reports from the Expert Task Force on Substance Use that lists actions the federal government needs to implement to tackle the crisis, including decriminalization of simple possession of all drugs, expanding the safe supply programs and regulating all narcotics.

And with an election underway, Lapointe said there is one major thing candidates can do to show they have done their homework and due diligence on such a crucial issue.

“What stands out to me is that somebody has talked to people with lived experience, not just looked at the data,” she said. “What we need is some leadership to be willing to be bold and say this has to stop – these deaths have to stop, these harms have to stop.”

“We have to face it head-on and we have to be bold and courageous and make some meaningful choices about our next steps.”

WHERE THE PARTIES STAND

Here is a brief look at what the platform from each party invited to the leaders' debates on Sept. 8 and Sept. 9 says about plans to tackle the opioid crisis in Canada:

The 2021 Liberal platform promises publicly accessible mental health care and “action to address the opioid crisis and make it easier for people with problematic substance use to access treatment,” which includes an investment of $25 million dollars for public education to reduce the stigma associated with drug use.

There is also an investment of $500 million to support provinces and territories in providing access to “a full-range of evidence based treatment.” There is no explicit mention of safe-supply, although Liberal Leader Justin Trudeau has previously expressed support for the measure.

The Liberals have promised that a re-elected Liberal government will amend the Criminal Code to repeal mandatory minimum penalties for drug-related charges and require "police and Crown prosecutors to consider diverting individuals out of the criminal justice system.”

The 2021 Conservative platform promises to “treat the opioid epidemic as the health issue that it is,” and states that law enforcement should focus on dealers and traffickers. “The last thing that those suffering from addiction should have to worry about is being arrested,” the platform reads, though it does not mention decriminalization.

The Conservatives pledge to revise the federal government’s substance abuse policy framework and “reorient the Canadian Drugs and Substances strategy towards ensuring that everyone suffering from addiction has the opportunity to recover and lead a drug-free life.”

The Conservatives' platform says they will invest $325 million over the next three years to create 1,000 residential drug treatment beds and build 50 recovery centres across the country, as well as support “land-based treatment programs developed and managed by Indigenous communities.”

They also promise to partner with provinces and territories to make Naloxone kits readily available for free across the country. The platform does not mention support for safe supply.

The 2021 NDP platform promises to declare the opioid crisis a public health emergency and commit to ending the criminalization and stigma of drug addiction while “getting tough” on traffickers.

The NDP pledge to work with provinces and health professionals to create a safe supply of medically regulated alternatives to toxic street drugs and support overdose prevention sites, while expanding treatment on demand.

The NDP also say they would launch an investigation into the role drug companies have played in fueling the opioid crisis and seek “meaningful financial compensation” from them for the public costs of the crisis.

The 2021 Bloc Quebecois platform does not mention the opioid crisis.

The Green party has not released its full 2021 platform yet, but has in the past called for drug possession to be decriminalized to deal with the opioid crisis.

The Greens have previously expressed support for Canadians having access to a safe, screened supply and have previously promised to declare the opioid crisis a national health emergency, increase supports for mental health and addiction, and boost funding to community-based organizations to test drugs and support drug users.

They have also previously pledged to ensure that Naloxone kits are widely available to treat overdoses.

Parties scrap over guns, COVID-19 response on Day 21 of campaign

Look to Conservative platform to 'fill in the blanks' on gun policy: O'Toole

Five things to know about the People's Party of Canada's platform

Spending on Facebook ads skyrockets amid election, as Liberals outspend all other parties combined

Three-quarters of Canadians don't see the election as necessary: Nanos