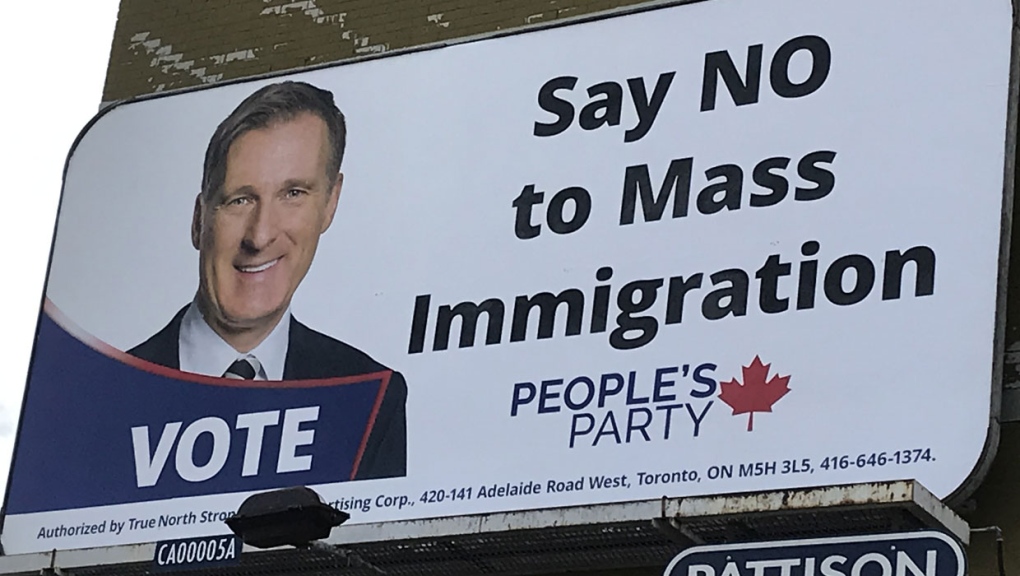 A billboard, posted to the side of a building in Calgary's Kensington neighbourhood, advertises part of the platform of Maxime Bernier, the leader of the People's Party of Canada.

OTTAWA -- The owner of billboards currently showcasing ads that seek to promote the People's Party of Canada's controversial stance on immigration reversed course on Sunday, saying the company would take the material down in response to "overwhelming" criticism.

The ads, featuring a photo of party leader Maxime Bernier, the slogan "Say NO to mass immigration" and a call to vote for his party, started popping up across the country late last week. They were criticized nearly immediately as promoting anti-immigrant rhetoric.

Petitions have since sprung up calling on billboard owners Pattison Outdoor Advertising to take the ads down, arguing that they violate the company's own code of conduct.

The company released two statements on Sunday, the first of which said that people who have a problem with the ads should take it up with the advertiser, True North Strong & Free Advertising Corp. The statement suggested they reviewed the ad content and it did not violate the Ad Standards of Canada (ASC) code or their own policies.

"We take a neutral position on ads that comply with the ASC code as we believe Canadians do not want us to be the judge or arbiter of what the public can or cannot see," the company said in a statement circulated on their social media accounts.

"Should advertising elicit a public debate, we encourage Canadians to voice their opinions directly to the advertiser who placed the message as it is our policy that their contact information must be a legible part of the ad."

But later in the day, the company issued a second statement saying that while the billboards didn't violate any policy, they would come down nonetheless.

"It was never my or Pattison Outdoor's intention to offend, alienate or in any way insult the public by allowing this ad to be run," company president Randy Otto wrote, adding that the company would review its advocacy guidelines.

He said that neither he nor anyone else at the company endorses the message of the advertiser.

Otto wrote that Pattison will inform True North Advertising Corp. of its decision on Monday, and the ads will come down as soon as possible.

At the People's Party national campaign launch Sunday in Sainte-Marie, Que., Bernier said he agreed with the ad's message, though noted they were placed by an outside group.

He said the current number of immigrants Canada accepts annually -- 350,000 -- is too high and needs to be scaled back.

The phrase, however, is associated with more than just numbers.

Critics of the term often consider it a synonym for opposition to visible minority immigrants on the grounds they pose a threat.

Critics of the ad were interpreting it that way. The premier of Nova Scotia called the tone "negative, divisive," while one Calgary resident who posted a petition calling for their removal said the ads are hurtful to newcomers and don't recognize their contribution to Canadian culture.

The People's Party of Canada platform says specifically that "mass immigration" is used as a tool by mainstream parties to buy immigrant votes and that it drives up housing prices.

The party also says immigration "should not be used to forcibly change the cultural character and social fabric of our country. And it should not put excessive financial burdens on the shoulders of Canadians in the pursuit of humanitarian goals."

According to a filing with Elections Canada, the third-party group behind the ads is run by Frank Smeenk, the chief executive of a Toronto-based mining exploration company.

The group filed interim financial returns with Elections Canada that show it spent $59,890 on billboards in "select cities in Canada" and received $60,000 from Bassett & Walker International Inc., a company that specializes in the international trade of protein products.

Smeenk declined to comment and messages left at Bassett & Walker were not returned.

Polls suggest the People's Party of Canada has around four per cent of voter support heading into the October election, and thus far, Bernier has been excluded from the official leadership debates.

On Sunday, Bernier was greeted by hundreds of raucous supporters who cheered his every word as he pitched his case for inclusion in the debates and repeated promises to eliminate the Canadian Radio-television and Telecommunications Commission and corporate subsidies.

But at a grocery store down the road from the partisan gathering, some citizens expressed doubts about whether they would support their longtime MP under his new party's banner.

Martin Roy, a resident of St-Isidore, said he worried that casting a ballot for Bernier could pave the way for Justin Trudeau's Liberals to win a second term.

"If our vote divides, what good is it?" he mused.

Others at the store expressed admiration for the Conservative candidate, Richard Lehoux, a dairy producer supporting the supply management system Bernier has vowed to abolish.

Bernier acknowledged on Sunday that the race in his riding could be tight, and said he planned to campaign heavily there ahead of the election.

But for fans like Daniel Bouchette, who drove from Quebec City to attend the launch, Bernier's willingness to take political gambles is among his greatest strengths.

"He could have rested on his laurels, sure of re-election, but he had the courage to launch a new party to do things differently," he said.

-- With files from Ugo Giguere in Sainte-Marie, Que.