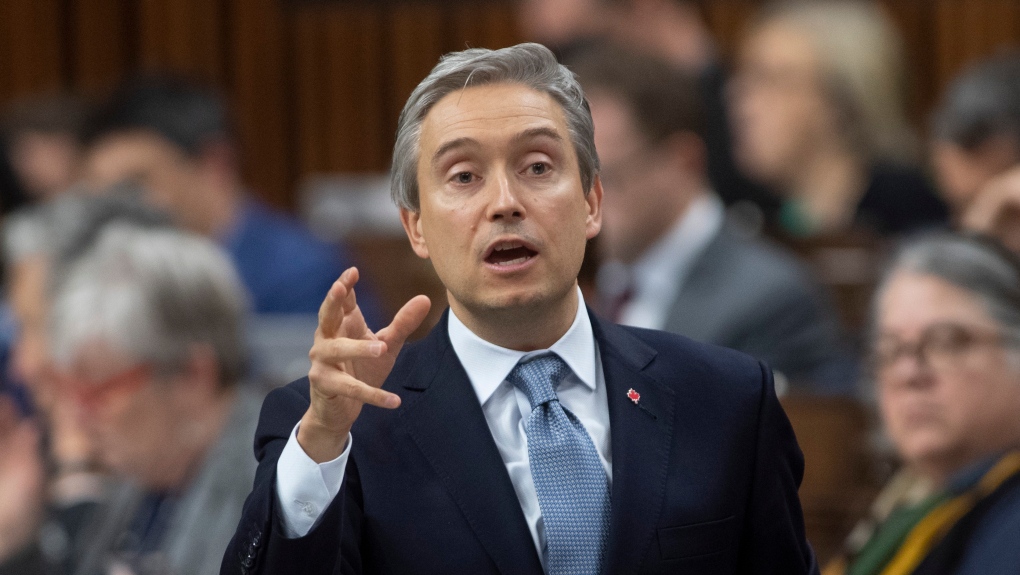 Foreign Affairs Minister Fran?ois-Philippe Champagne responds to a question during Question Period in the House of Commons in Ottawa, Thursday, Feb. 27, 2020. THE CANADIAN PRESS/Adrian Wyld

OTTAWA -- Foreign Affairs Minister Francois-Philippe Champagne will visit with the head of Ukrainian Airlines next week to demand compensation for the family members of those killed on Flight PS752.

Champagne said Thursday it will be only the second time the two have spoken since the crash that took the lives of all 176 on board, including 55 Canadians.

"When it comes to compensating the families, there are two types of compensation, there's the statutory compensation from the airline under the Warsaw Convention and I’ve made a plea to them at the time to accelerate that payment," Champagne told reporters in Ottawa on Thursday.

Flight PS752 was shot down shortly after takeoff from the Iranian capital of Tehran on its way to Kyiv, Ukraine. Canadian students and academics were among those on board.

The federal government is also pushing for state compensation from Iran. The Iranian government has accepted responsibility for the downing of the jetliner.

Champagne said he'll make this a priority during his next call with the International Response Coordination Group. Other members include Ukraine, Sweden, Afghanistan and the U.K. – all countries directly affected by the crash.

"The families deserve to be paid and to be paid quickly," Champagne said.

On the sidelines of he and Prime Minister Justin Trudeau’s trip through Africa and Europe earlier this month, the foreign affairs minister called for the retrieval of the plane’s black boxes from Iran, which doesn’t have the technology needed to download their contents.

Champagne’s team told CTVNews.ca he’ll be in Ukraine from March 4 to 6 and while the issue of the black boxes remains within the jurisdiction of Iran, their recovery will be raised during the trip next week.

Champagne will also head to Latvia where he’ll visit the 600 Canadian troops who have been leading a NATO battlegroup in that country since 2017.

The battlegroup, which includes soldiers from several other countries, is one of four such forces in the Baltics and Poland that were established to respond to Russia's annexation of Ukraine's Crimea region in 2014.