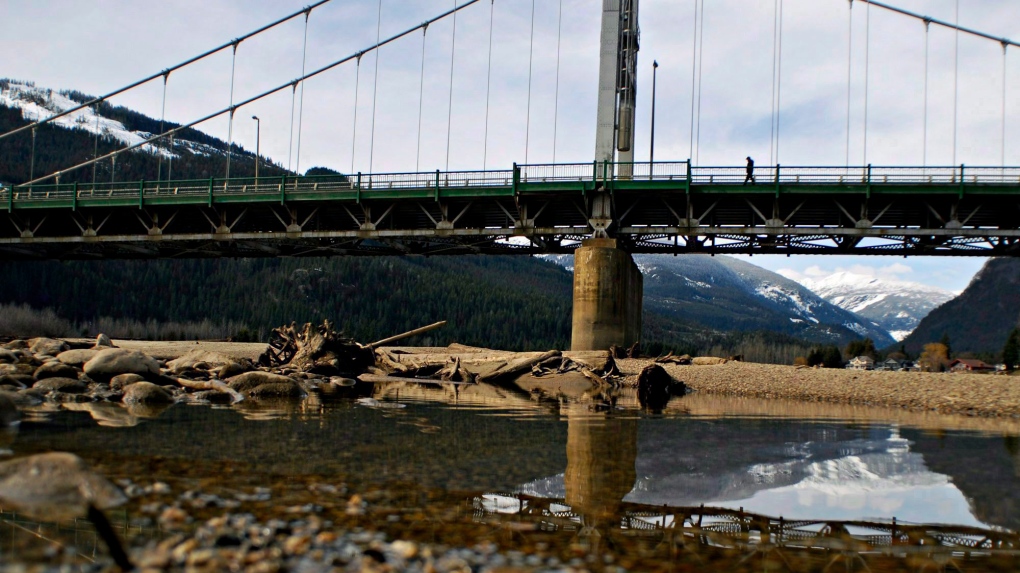 A man crosses a bridge over the Columbia River in Revelstoke, B.C., on March 14, 2010. THE CANADIAN PRESS/Daniel Hayduk

Canadian negotiators are not budging on a request by their American counterparts to reduce an electricity entitlement under a treaty that the United States says is worth as much as $200 million a year.

The Columbia River Treaty, which expires in six years, was ratified in 1964 to address flooding concerns in the United States and the growing demand for energy.

In return for building three dams on the river, Canada received half of the electricity generated for its role in storing water in the reservoirs that can be released to make power.

Katrine Conroy, a British Columbia cabinet minister and one of Canada's lead representatives on the file, said she doesn't agree with American complaints that the Canadian entitlement is too large.

"A decade ago, the Canadian entitlement was worth probably $250 million annually to B.C., but today it's only worth about $115 million and it's dropping. And we know that the cost and ongoing negative impacts of the treaty haven't diminished over the years and will continue to cost the province," Conroy said.

About 50 American legislators toured the Columbia basin near Castlegar, B.C., this week to see those impacts, she said, adding Canada flooded farmland in the region that was once second only to the Fraser Valley in productivity, in order to create the reservoirs.

Other areas like the village of Nakusp on the north shores of Upper Arrow Lake are vulnerable to drying out if the water levels go too low, she said.

While recognizing the water needs to flow, "we would like a little more control over our water supply on this side of the border," she said.

American negotiators have said they want to add environmental measures to the agreement that would empower it to request Canada release more water to improve salmon habitats.

Conroy says Canada is very interested in adding an environmental component to the treaty, noting that restoring salmon habitat is a shared concern.

However, she says that won't necessarily mean giving the United States more power to increase water flow from Canada, which could leave those B.C. communities in the basin dry.

"There's a lot more to the discussion than just the water flow," she said.

While American representatives have characterized the treaty as too favourable to Canada, Conroy said it's important to acknowledge all of the benefits the United States has seen as a result of it, as they move forward.

Americans have seen many economic benefits from the river, which it uses as a transport system for lumber and agricultural products, for recreation, power production and as a reliable water supply for irrigation.

The next negotiation rounds have been scheduled for Aug. 15 and 16 in Nelson, B.C., followed by Oct. 17 and 18 in Portland, Ore. Negotiations began in the spring and there is currently no timeline or deadline for how long they may take.

"This is a long process of negotiations," Conroy said.

"People are genuinely wanting to work together as a region and we know the importance of working together."