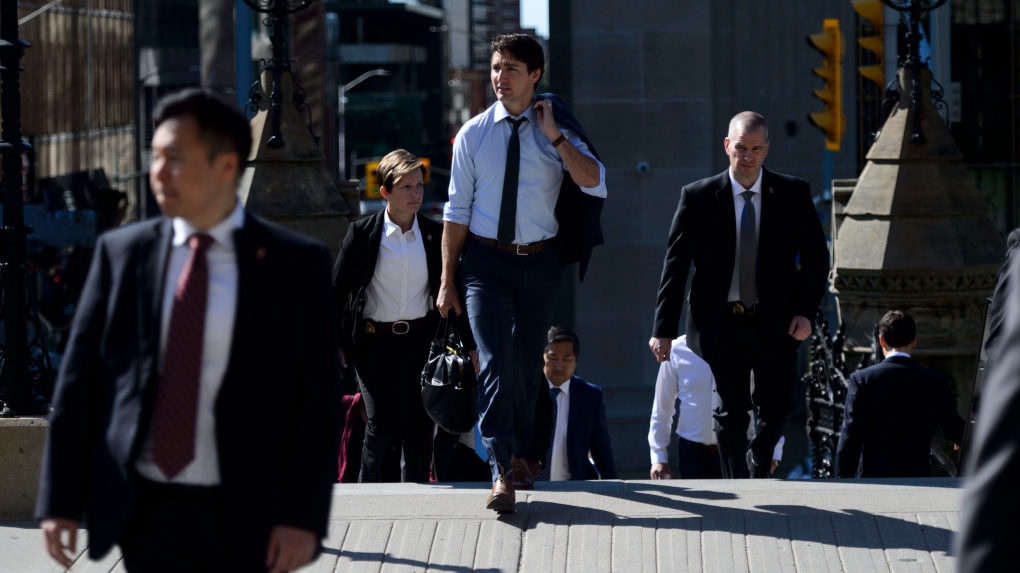 OTTAWA – If you are on Sparks Street just off of Parliament Hill in Ottawa on Tuesday, you may come across the latest evolution of conservative political advocacy group Canada Proud's anti-Prime Minister Justin Trudeau campaign: people in banana costumes.

The national iteration of the anti-Liberal social media group Ontario Proud launched earlier this year with the focus of seeing Liberals and Trudeau defeated in the October federal election.

Part of this campaign has been the creation of a website and hashtag #TrudeauIsBananas. The webpage produced by Canada Proud states that before the federal election, voters should question "if he's ripe for another term," offers a limited "unpeeling" of Trudeaus record, and includes an acrostic poem of sorts, claiming Trudeau "builds absolutely nothing, anytime near anything."

According to an email obtained by CTV News sent by the "experiential marketing" firm Tigris Events that Canada Proud has hired to organize this event, the group will be paying a dozen "brand ambassadors" to distribute flyers, and encourage people to engage with the ongoing social media campaign, practically across the street from the Prime Minister's Office.

The people who sign up to take part and wear banana costumes will be paid $135 for the six hours they'll be out there, plus $20 for parking, or $120 for the half a dozen people dressed in branded yellow T-shirts and black shorts.

Canada Proud is organizing a similar event at Yonge and Dundas in Toronto on Wednesday.

"This campaign is intended to be a lighthearted, tongue-in-cheek approach to politics. It uses facts and poses questions to shed light on some of Trudeau's policies and decisions. It’s not meant to be a nasty smear campaign," reads the pitch sent by Tigris looking for participants.

This is the first time Canada Proud is moving its campaign from the online sphere to the streets. Though, as The Canadian Press has reported, in a push to defeat then-Liberal premier Kathleen Wynne, Ontario Proud hired "street teams" to hand out thousands of brochures.

Canada Proud founder Jeff Ballingall denies he is paying protesters, nor is this an organized rally, rather these events are meant to promote the anti-Trudeau campaign.

"We're trying to laugh at Trudeau really, have fun with it because I think people are sick of, no one really wants the doom and gloom scary-style politics, I think it's really effective if people are laughing at Trudeau," he said, denying that calling the prime minister "bananas" is disrespectful.

Ballingall will be attending with a camera crew to create a video that'll then be shared with the Canada Proud online following, which has more than 112,000 followers on Twitter and Facebook.

The campaign's hashtag has been used by both Canada Proud and Ontario Proud accounts for months, but has also been shared or 'liked' by former Conservative staff on Twitter, and other groups that spread pro-conservative, pro-oil industry messaging.

The federal Liberal Party has seized on Ontario Proud's foray into the national political scene, sending a fundraising pitch to supporters in April titled "this is what we're up against," that billed Ontario Proud as "an organization founded and directed by alumni of Stephen Harper's government."

In a statement to CTV News, Liberal Party spokesperson Braeden Caley equated these events with the Ontario PC candidate who hired actors to pose as Tory supporters outside a leaders’ debate during the provincial campaign.

"These are the same kind of dirty tricks that we can continue to expect from Conservatives and their allies in this election," Caley said. "Their one goal is to try to elect another Conservative politician."

Ballingall, a former federal Conservative staffer, denies that the campaign has any direct ties to the Conservative Party of Canada, nor is any of Canada Proud's funding coming from the party.

"We do not have any ties to the Conservative Party… There's no ties, there’s no funding, nothing," Ballingall said, adding that any Conservatives who have picked up on the campaign are doing so organically.

Ballingall said he intends to register as a third party with Elections Canada. Under new federal elections law passed by the federal government, as a national-scale third party entity Canada Proud can spend just over $1 million during the pre-writ period which runs from June 30 until the day before the election is called, and just over $500,000 during the election.

Depending on how this week's events go, Ballingall said these on-the-ground events may become more common in the lead up to, and during the campaign.

"We're going to be doing lots of different things during the election and this is just the start of it," he said.