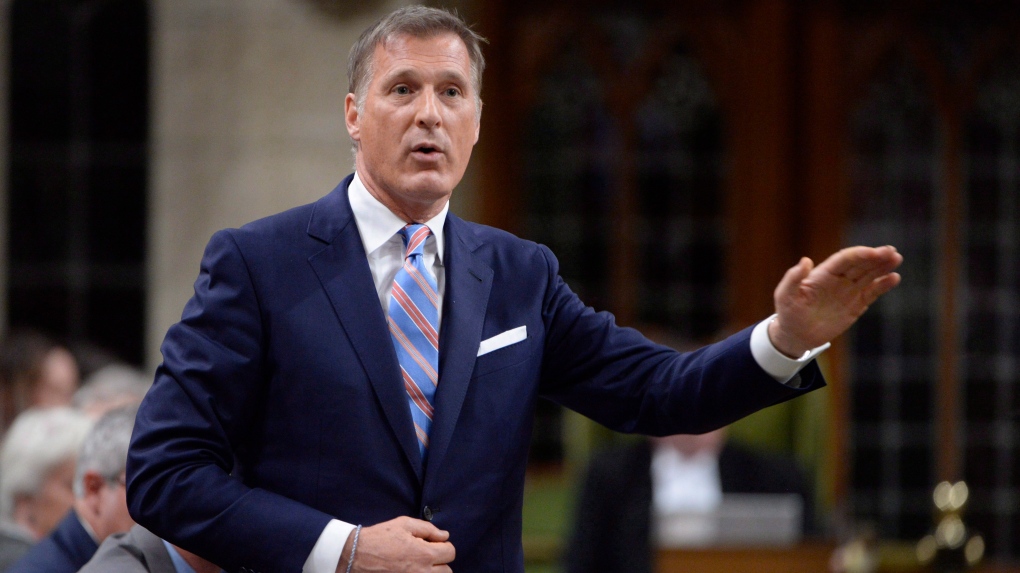 Conservative MP Maxime Bernier rises during question period in the House of Commons on Parliament Hill in Ottawa on Thursday, Sept.28, 2017. (THE CANADIAN PRESS/Adrian Wyld)

OTTAWA -- Days after Conservative MP Maxime Bernier was turfed from his party's shadow cabinet for continuing to promote his anti-supply management position, supporters are demanding he be reinstated -- and using money to show they mean business.

In an email to supporters Friday morning, Bernier said he was "flabbergasted" that he managed to raise $30,000 in just 24 hours to help pay off his debts from the 2017 leadership campaign.

The fundraising haul came in after he emailed supporters Thursday morning with the subject heading "are you still with me?" -- one day after he was ousted from his job as the party's innovation critic for posting to his personal website a chapter about supply management from his forthcoming book.

Bernier says the $30,000 that came in was "several times" the campaign's previous 24-hour record.

"You can be assured that the response was received loud and clear," he said in a follow-up email Friday morning.

Rebel Media is also running a petition on its website demanding Bernier be reinstated in a piece that is heavily critical of the Conservative position supporting supply management. The petition is being widely circulated on social media with hashtags like .saveBernier and .IStandWithBernier.

A spokesman for Scheer said the leader has no comment on Bernier's fundraising or the petition. Scheer has said Bernier was fired because he broke a promise to stop promoting his book, which criticizes supply management and Scheer for catering during the leadership contest to the dairy farmers who benefit from it.

Bernier has not responded to several requests for an interview but has used Twitter to say the offending chapter of his book has been available publicly for weeks, and to thank his supporters.

"Be assured that I'm as committed as ever to defending our conservative principles of freedom and small government, and that I will continue to fight for them in whatever position I find myself," he wrote Thursday.

A public divide over supply management comes at an inopportune time for the Conservatives, particularly as Canadians rage at U.S. President Donald Trump's attacks on Canada, including supply management. No Canadian politician currently wants to be seen on Trump's side in a bitter trade dispute that is growing more rancorous with every click of Trump's tweeting fingers.

The Conservatives are also trying to hold on to a lead in the polls in Monday's byelection in Quebec's Chicoutimi-Le Fjord, a riding where they finished fourth in 2015.

When he campaigned in the riding north of Quebec City last week, Prime Minister Justin Trudeau pointed to Bernier while facing a protest from Quebec dairy farmers who fear Trudeau is going to sell them out to Trump.

"If anyone has any questions it's to wonder why the Conservatives have chosen as their critic on economic development someone who is dead set against supply management in Maxime Bernier," Trudeau said on June 7.

Five days later, Bernier was no longer the critic. Many Bernier supporters are convinced the firing is about trying to save face with dairy farmers over supply management.

Supply management is an agricultural policy that sets quotas for products like milk, eggs and cheese to prevent the market from getting over-saturated and regulate prices. Critics of the system argue it artificially inflates the price of food rather than allowing farmers to determine on their own how much milk they want to produce and having market prices fluctuate.

"It's not helpful for the party to have this kind of discussion but long term, since the election is a year and a half away, I think we have more than enough time to go way past this," said Meterissian.

However he hopes Bernier doesn't flee the Conservative coop over the dispute because there is room for him -- and a need for him -- even if he disagrees about supply management.

"Running as an independent will not help him advance his ideas," said Meterissian.

With files from Andy Blatchford