Anti-hate experts are urging policy makers to take action against what they describe as growing right-wing extremism in Canada.

One of these experts says research suggests that millions of Canadians have been drawn into the far right over the course of the pandemic, some of whom have been indoctrinated by misinformation and lies that were then amplified by the Freedom Convoy.

Evan Balgord, the executive director of the Canadian Anti-Hate Network, says the convoy’s organizers were able to successfully use the month-long February protest to recruit vaccine-hesitant people into their movement.

“They were now rubbing shoulders with, you know, racists and bigots and people who would like to use violence to overthrow the government. A portion of those people are getting further radicalized.”

Balgord was one of more than a dozen experts who spoke at “Hate Among Us,” an international conference held in Ottawa Tuesday that discussed solutions to growing extremism.

Although some of the Convoy’s leadership is now facing criminal charges, Balgord says the movement’s ideas are entrenched in the mainstream.

Balgord, whose organization tracked right-wing groups and monitored their activities and influence, claims that six years ago there were around 20,000 white supremacists in Canada. That’s not the case anymore, Balgord says.

Balgord estimates that there are now 10 to 15 per cent of Canadians who hold far right views, which encompass a wide range of extremist opinions including anti-government and anti-science perspectives along with racist and homophobic beliefs. Some of them may not consider themselves racist, but they are giving cover to extremists, he says.

A recent Abacus Data survey indicated that 44 per cent of the Canadian population, or 13 million Canadian adults, believe in at least one conspiracy theory. These theories include racist beliefs that political elites are trying to replace native-born Canadians with immigrants who support them, or that the World Economic Forum has a secret strategy to impose its economic plans across the globe.

In addition to this, Frank Graves, president of EKOS Research, says at least 10 per cent, or more than three million Canadians, view the current government as illegitimate. The supporters are predominately male and under 50 years old, with a high school education. Graves says this group has become a political force in Canada and gravitates toward parties on the right of the spectrum. 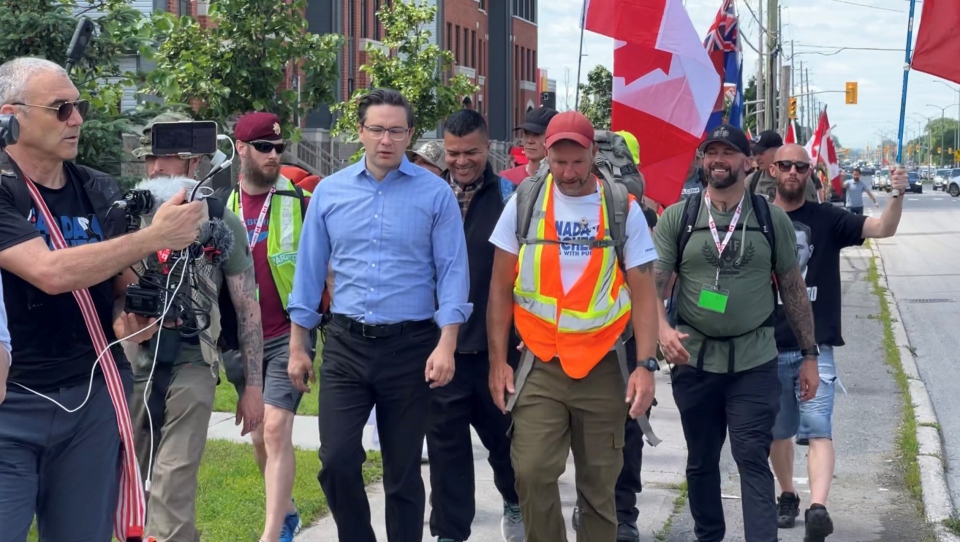 The Conservative Party of Canada’s new leader, Pierre Poilievre, has embraced convoy supporters and marched with a Canadian soldier who refused to be vaccinated.

“But what you need then is to find simply another 10 per cent of voters who are sick to death of the current government…And I think that would provide a successful path to power. I'm not saying it's a sure thing, but it's certainly not implausible.”

The far right elements in that 10 per cent of voters who view the government as illegitimate can, in extreme cases, be dangerous or delusional, anti-hate experts say.

That was evident in Coutts, Alta., where RCMP arrested seized weapons and tactical gear from a group that took part in the border blockade. Some members may have had ties to the neo-fascist group Diagolon.

Photo of items seized as a result of last night’s search warrants at the Coutts border blockade. https://t.co/Rve2jtvVX0 pic.twitter.com/3szbXlKrJl 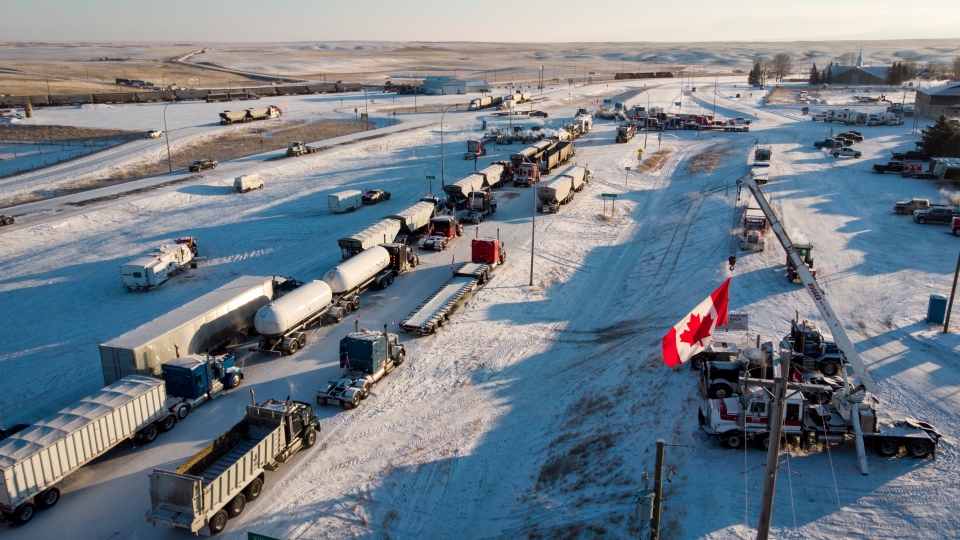 In August lawyer Caryma S’ad, who has been documenting the activities of Convoy supporter for months, captured video of QAnon supporters attempting to place Peterborough police under citizens arrest.

Then two weeks later, Finance Minister Chrystia Freeland was ambushed by a Freedom Convoy supporter who verbally assaulted her.

Stephanie Carvin, a former national security analyst for the Canadian government, says before the pandemic, police were concerned about terrorist attacks from foreign players such as Al Qaida. But as the U.S. learned on Jan. 6 last year during the attack on the Capitol, the risk picture has changed - the dominant threats here are homegrown. 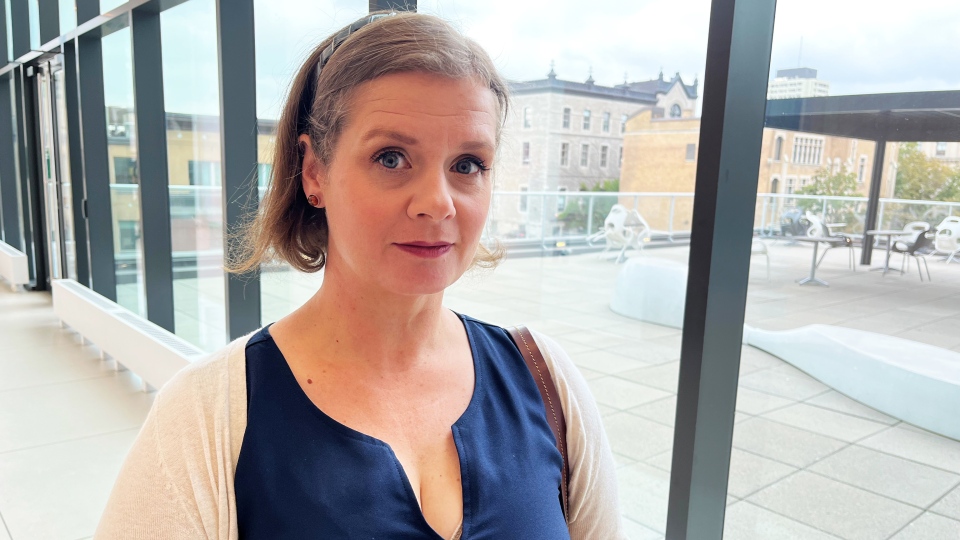 “Jan. 6 changed things in Canada. We’re now not so much worried about bombs. We’re worried about a mob armed with hockey sticks and fire extinguishers charging at the historical parliament buildings,” Carvin said.

In June, the parliamentary protective service issued panic buttons to MPs, some of whom received death threats. Since the pandemic, the threats have become more pervasive, personal and tougher to guard against, says Carvin, who now teaches at Carleton University in Ottawa.

“It’s a much more dangerous situation when people see politicians as legitimate targets for violence.”

To counter this growing threat to democracy, Heidi Beirich of U.S.-based Global Project Against Hate and Extremism, says the extremists are exploring real grievances like job losses and rising costs of living that policy makers need to address. She says Canada should pass a digital accountability law that forces social media companies to clamp down on disinformation shared on their platforms.

Bierich says community groups can organize to fight back against the hateful movement. An example is Ottawa’s “Battle of Billings Bridge” in February this year, where concerned residents blocked a roadway for hours, preventing a convoy of vehicles from joining the trucker protest that occupied Parliament Hill. 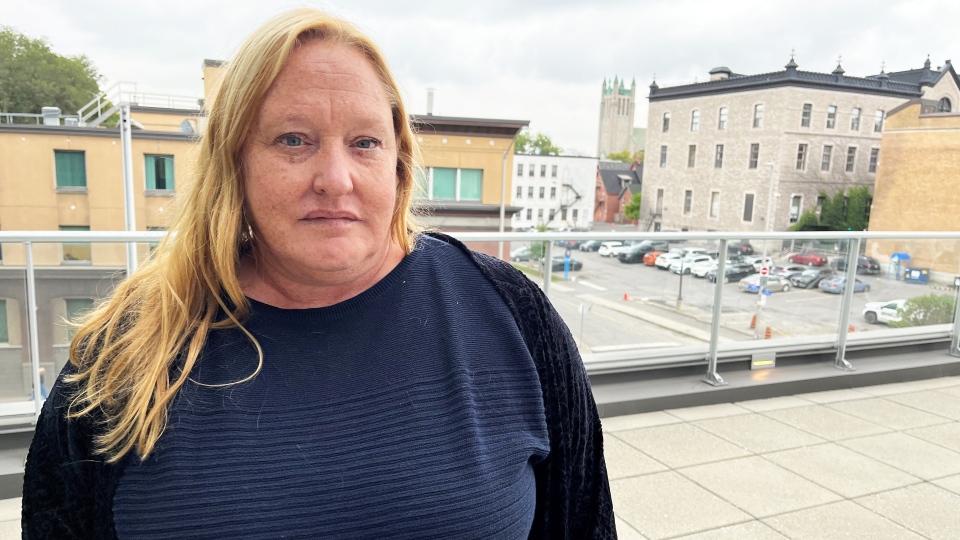 “This is a situation where we have a growing far right movement that’s a threat to a lot of things: climate change, racial injustice and sound immigration policies. The list could go on,” Bierich said.

Beirich added that it’s important for media to continue reporting on the far right and its views.

“It’s not a question of giving them oxygen. They’ve got the oxygen. The question now is are they being appropriately examined and interrogated by the press about their beliefs and ideas so other people can be inoculated from their views.”