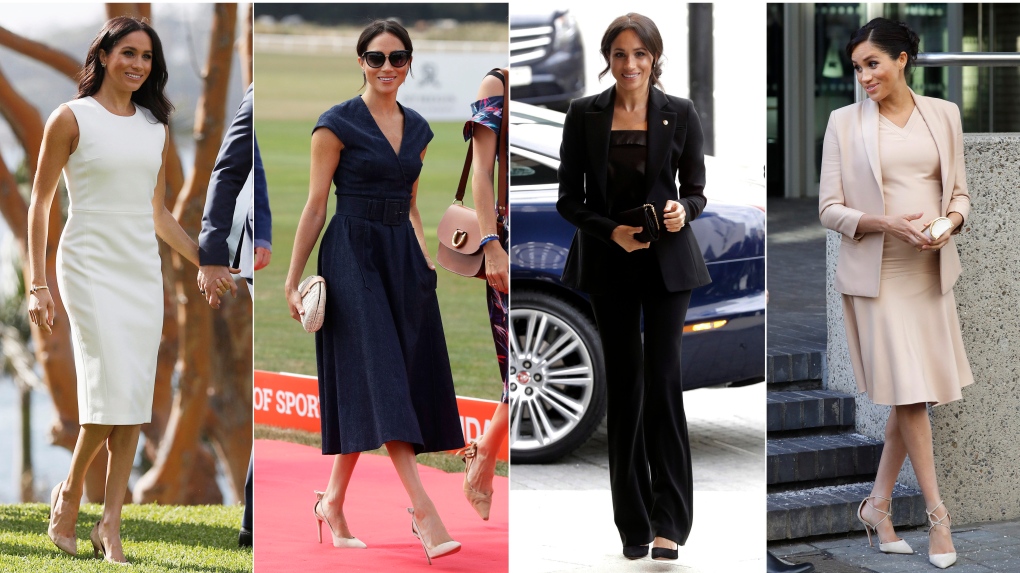 This combination photo shows Meghan, Duchess of Sussex, at Admiralty House in Sydney, Australia on Oct. 16, 2018, from left, at the Royal County of Berkshire Polo Club in Windsor, England on July 26, 2018, at the annual WellChild awards in London on Sept. 4, 2018 and at the National Theatre in London on Jan. 30, 2019. (AP Photo)

OKEMOS, Mich. -- From Meghan the Duchess of Sussex's recent maternity clothing to Kate the Duchess of Cambridge's love of L.K. Bennett wedges, the women continue to be trendsetters when it comes to their fashion choices. So much so that bloggers have made careers out of tracking who and what they wear.

Susan E. Kelley founded the website What Kate Wore in 2011, when Prince William got engaged to marry Kate Middleton.

"I had another blog, and anytime I wrote about Kate, there was this huge boost in readership. And so I talked about it with my husband. I said, 'You know, do you think people would really be interested in reading about what Kate Middleton wears?"'

The site really took off when the royal couple took a tour of Canada and the United States a few months after their wedding.

"She's changing outfits multiple times a day, and people loved it. There was this enormous interest in it, and it exploded on Twitter and on Facebook and it kind of rolled on from there," Kelley said during an interview at her home in Okemos, Michigan, near Lansing.

Christine Ross of Lovettsville, Virginia, is co-editor of a website that follows the Duchess of Sussex's style, called Meghan's Mirror . The site actually launched before Meghan started dating Prince Harry, because Ross' co-editor, Amanda Dishaw of Toronto, was a fan of Markle's TV series "Suits."

Once Harry and Meghan were spotted together in public, the actress' profile went up. And so did visits to their site.

"When Meghan was seen at the Invictus Games with Prince Harry in Toronto, it just exploded, and all of a sudden it was like, 'OK, this is serious. This is real. This is happening,"' said Ross. "People were so interested in what she wore and the charities that she worked with and the messages that she was sending, and the site just really took off from there."

So, how exactly do these bloggers figure out who the duchesses are wearing?

Kelley says for official engagements, the Palace provides a minimal amount of information about the clothing worn.

"Kensington Palace will tell reporters at the scene the primary designer she's wearing," said Kelley, adding that the Palace doesn't reveal who made Kate's accessories.

But it also comes down to a study in repetition.

"Kate has designers that she goes to again and again," Kelley said.

For Meghan's Mirror, Ross says she and her team have studied fashion and will examine the Duchess of Sussex's wardrobe down to the tiniest of details to get it right.

"Every time there's a new picture of Meghan, whether it's a paparazzi photo or an official event, there's a mad rush to our computers, and we really just start Googling," she said. "It comes down to a really unique knowledge of the brands that she loves. Meghan tends to stick to the same designers over and over again, and we sit down and analyze things like stitching or buttons. ... We've become very good at (it) as we've learned more about her style."

Ross says Meghan's Mirror considers itself an ultimate resource for fashion info on Meghan, including an archive of anything she's worn in public.

"We've worked really hard to curate our archives where you can find exactly what she's worn and all the details about it, and you can also get mirror Meg styles at a fraction of the cost. So every time she steps out, we really work hard to add everything she's wearing, from the earrings to the shoes to the jacket, all on to our archive so our readers can go on there, click and shop those styles."

They also sell Meghan's Mirror-inspired items, including jewelry on Etsy.com.

What Kate Wore also links to clothing Kelley calls "repliKates," shoppable items similar to something the Duchess of Cambridge has worn.

Tracking the duchesses can be time consuming, especially with the time difference from the U.S. and London. "There are a lot of very early mornings for me," Kelley said. "But the real crunch comes when they go on tour, because multiple tours have been in time zones that were 12, 14, 16-hour time differences. I just know I'm not going to see my husband. We'll pass each other in the hallway."

All in all, it's still fun work.

"We have readers in places where I never thought people would be interested," Kelley said. "There's like 200 countries who have read the blog."

Royal fashion at a glance

Royal fashion at a glance