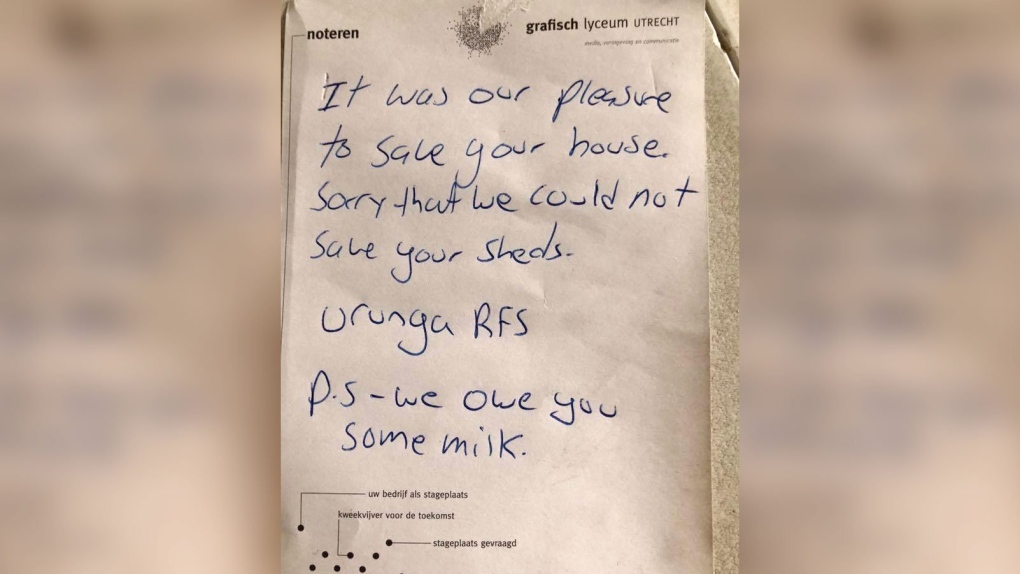 Firefighters in Australia have been battling some of the worst bushfires in decades -- but one crew still remembered its manners.

When homeowner Paul Sekfy returned to his property he found it damaged but still intact, thanks to the firefighters.

Inside the house he found a note from the Urunga Rural Fire Service.

"It was our pleasure to save your house. Sorry that we could not save your sheds," it read. "P.S. we owe you some milk."

Kale Hardie-Porter was part of a team sent to an area near Macksville, New South Wales, to fight fires in what he described to CNN as "horrendous conditions."

They came across a house and made a decision to try to save it, despite facing "smoke and heat you can't imagine."

Two sheds were lost to the flames, and the firefighters were faced with a decision on what to do next.

"It became clear it was a matter of saving the house as best as we can and saving our truck as well," said Hardie-Porter.

Not knowing whether the house would survive, Hardie-Porter told CNN the team opened the fridge and took some milk as they hadn't eaten or drunk anything since midday.

After the fire passed the firefighters were able to leave the area, and Hardie-Porter decided to leave a note in case the house survived and the owner could get in touch.

Sekfy was struck by the note and posted a picture of it online.

He told CNN that the firefighters also ate some cheese and peanut butter, but he doesn't mind.

"They don't have to pay back the milk, I'll just sort them a couple of cases of beer," said Sekfy, who told CNN he is now living in a motel as his house is uninhabitable.

"I lost two sheds and everything else, pumps, machinery, tools and my mountain bike for example."

Australian authorities say there are reports of property damage and injuries throughout New South Wales, Australia's most populous state, but have not confirmed the exact extent.