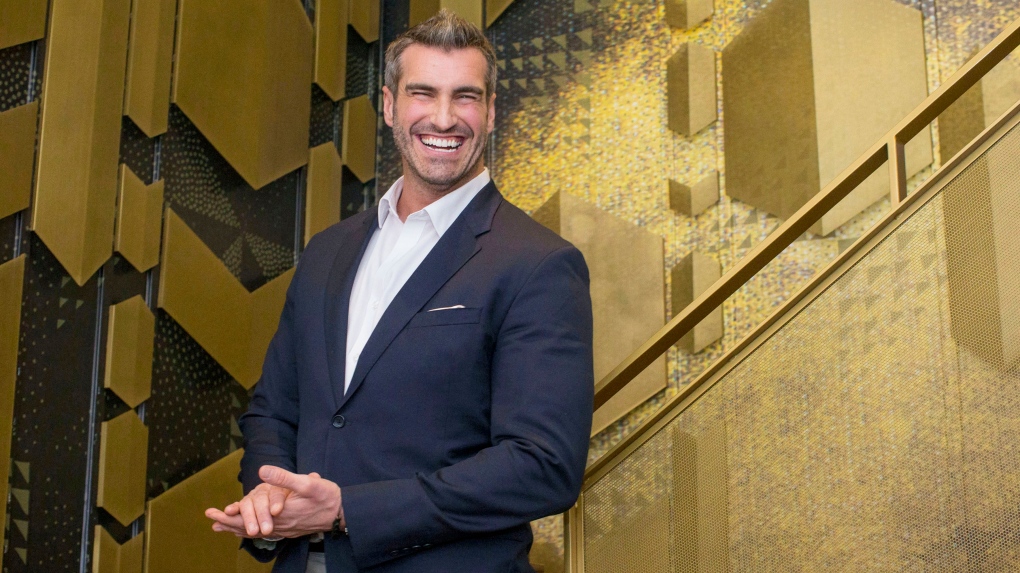 'Plus-sized" male model Kyle Andrew is photographed in Toronto on Tuesday, May 7, 2019. At six foot seven inches and about 215 pounds, Hamilton-based model Kyle Andrew had a tough time breaking into the fashion industry in his early 20s. THE CANADIAN PRESS/Chris Young

TORONTO -- At six foot seven inches and about 215 pounds, Hamilton-based model Kyle Andrew had a tough time breaking into the fashion industry in his early 20s.

The standard sample sizes of clothing used at fashion shoots and shows were too small for his tall frame and, although he had an agent, he had to walk away from the business.

"I was in great shape at the time but I just didn't fit the clothing -- sleeve lengths, all of that stuff -- and I had no success," recalls the 39-year-old, who was born Kyle Andrew Skinner but goes by Kyle Andrew professionally.

These days Andrew's modelling career is thriving, though, as the men's fashion industry slowly catches up to the women's so-called curvy movement and embraces different body types through a wider spectrum of clothing and campaigns.

Meanwhile, IMG Models now has a Brawn section, which has launched Zach Miko to plus-sized fashion fame, with 86,000 followers on Instagram, his own "Big Things" podcast and an advice column at Chubstr.com.

Then there's Wilhelmina's Titan division, which recently teamed up with JCPenney and basketball star Shaquille O'Neal on a model search for his XLG clothing collection.

Several other labels are creating a more broad range of men's clothing sizes, including ASOS and American Eagle, and using a more diverse slate of models for those campaigns and fashion shows.

"More and more of it is cropping up and you can see a market emerging and building for men, slowing catching up to where size acceptance is for women," says Andrew, who is now about 260 pounds and details his industry experiences at 48long.com.

"It's exciting to watch obviously for professional reasons for myself, but just knowing the struggle of people with larger body types that want to also look good from a clothing point of view, that's exciting to see."

Andrew signed with B&M's XXL division in fall 2016 after the agency noticed him as a contestant on "The Bachelorette Canada." He is now also represented by other agencies in the U.S. and Europe, is the face of George Richards Big & Tall Menswear, and starred as a Viking in a Harlequin commercial.

"It's a growing trend, for sure," says Andrea Evans, B&M's agency director.

"We are starting to see clients request or more and more. But it's still nowhere near the curvy movement for women."

Evans says they don't refer to their male models as plus-sized.

"It's usually 'big and tall' or 'double-XL' or 'brawn,"' she says. "Retailers and designers started those key words. We never speak of weight. It's all based on measurements."

But it encompasses "many more body types -- size, shape, athletic ability," he adds, predicting "extended size" will become a widely used term, which he prefers.

Evans chalks up the trend partly to a growing number of men becoming interested in fashion because they see it more on social media.

"It's more available to them and they can buy it online, they don't have to go into the store, the experience doesn't have to be as overwhelming as it has been typically for them," says Evans.

Men's fashion is also becoming "more representative of the population, she adds.

Andrew notes manufacturing technology is getting increasingly sophisticated and better able to create a wider range of sizes for a cheaper cost.

Toronto photographer Anthony Manieri, who promotes positive body image for men through his "Arrested Movement" portrait series, hopes the trend signals that more men are opening up about this subject matter.

"When body positivity is discussed, it's usually always around women, and I believe rightfully so because they get the brunt of it," says Manieri, whose series has appeared in Vogue Italia and features nude portraits of male subjects.

"I know men suffer from this as well, but they're more quiet about it (due to) toxic masculinity, where you have to be strong, you can't say anything, you shouldn't say anything."

Toronto designer Stacey Gonder, who cast three so-called "plus-sized" male models in her recent fashion show at the city's Anime North, surmises that swirling conversations in the media about toxic masculinity and the .MeToo movement are contributing to the trend.

"In general men are being encouraged to be much more aware of themselves, whether that's emotionally, physically, intellectually, and also about what they put out into the world," says Gonder, who caters to a broad clientele under her brands Flash Design Co., and the House of Sass and Magic.

Andrew says he hasn't struggled with body image issues but he has faced the frustration of not fitting into clothing on the racks and not being able to express his love of fashion without customized outfits.

"The world of fashion just wasn't accessible to a person outside of those normal-sized ranges," he says.