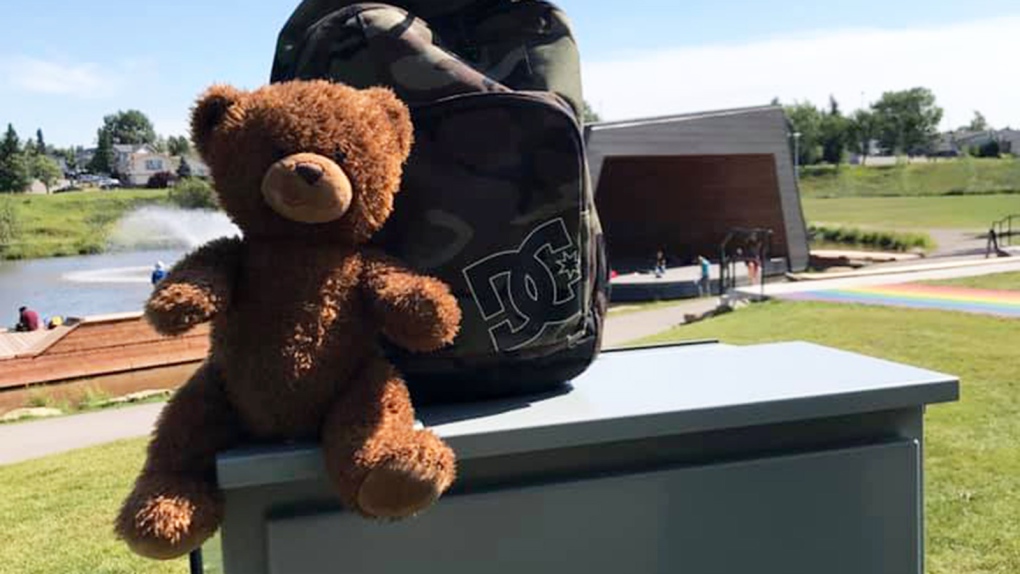 A community-wide effort to find a young visitor's missing teddy bear, which contains a message recorded by its owner's mother prior to her death, has ended with surprising success.

Seven-year-old Duncan MacDonald was in Airdrie, Alta. last week with his family, on a vacation from Nova Scotia.

Somehow, the boy's backpack went missing over the course of the trip. In the bag was a teddy bear that had a special voice message MacDonald 's mother had recorded before she died.

News of the bear's disappearance struck a chord with many of the city's 60,000 residents. Facebook pleas to find the stuffed animal were shared hundreds of times, and there was even a volunteer search organized.

Despite those efforts, there was no sign of the teddy bear or the backpack – not until Monday night.

Heidi Erickson had driven her 13-year-old son Joshua and his friend Mitch to a park to go fishing. When she returned to pick them up, she noticed a backpack hanging from a post. It hadn't been there earlier in the evening.

"I thought: 'The backpack looks really familiar, but I know it doesn't belong to my kids,'" Erickson told CTVNews.ca.

"Then it occurred to me that it may be the backpack from the story, so I went and opened it – and sure enough, that bear was inside. It was really exciting."

Erickson grabbed the backpack and took it to her car. Recalling what he'd heard about the recording from MacDonald's mother, Joshua figured out how they could be certain that it was the same bag and bear that had their town abuzz.

"He squeezed on the tummy and we heard the message, and … all of us teared up. It was really very personal, but very beautiful," Erickson said.

From there, Erickson reached out to MacDonald's stepmother, Ranelle MacMaster – the first person to alert the community to the missing teddy – not realizing the family had just been told that it was unlikely the backpack would ever turn up.

"She was so overjoyed," she said.

Erickson sent MacMaster a picture of herself with the bear, saying she was borrowing him for a "sleepover" and would return him soon. She then accompanied the bear on a tour of Airdrie, stopping at local landmarks including the mayor's office and the RCMP detachment.

The bear was then taken to the local radio station, which had publicized the bear's disappearance from the beginning, helped make arrangements to return it to Nova Scotia and organized the tour of the city.

The animal will be flying back east courtesy a free trip from WestJet, Erickson said.

For Erickson, the saga is proof that there's something special about Airdrie, and that she made the right choice in moving her family there three years ago.

"That was something we noticed almost immediately – the welcoming, how much people cared," she said.

"It's so nice to have such a happy ending when there's so much doom and gloom in the news overall."