How Canadians are improving Halloween for children with special needs 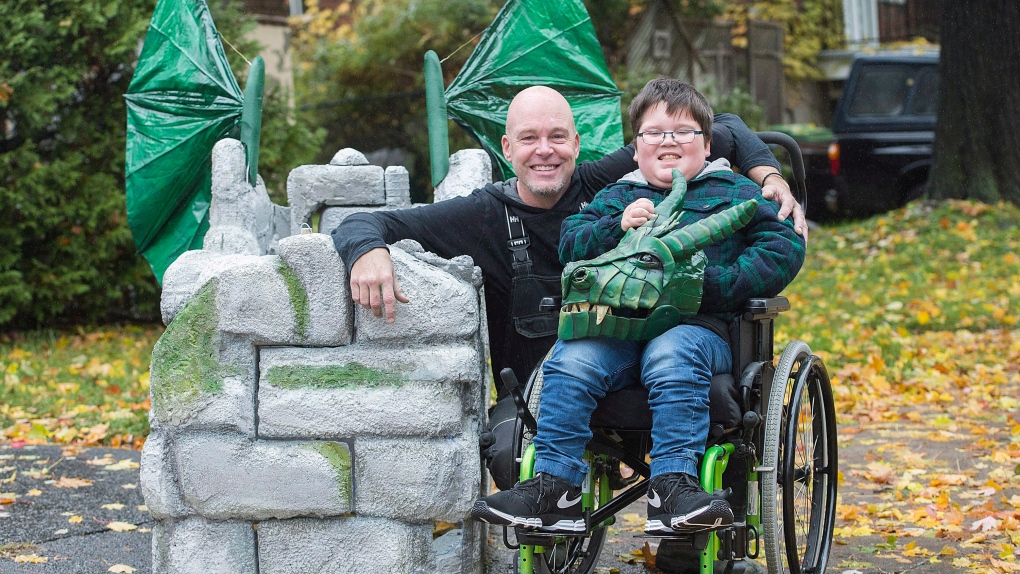 Emile Laliberte, right, poses with Bob Murphy, who helped make his costume, next to his Halloween outfit in Montreal, Sunday, October 28, 2018. (THE CANADIAN PRESS / Graham Hughes)

In Halloweens past, 10-year-old Emile Laliberte struggled to find a costume that wouldn't be hidden by his wheelchair.

But Emile looks to be the envy of all the children on his block as he sets out trick or treating on Oct. 31 as a green dragon with 3D-printed scales, motorized wings and glowing animated eyes to watch over the Styrofoam castle that surrounds his wheelchair.

"I will impress the kids," Emile said. "Kids with special needs have (a) right to wear a costume with their wheelchair."

Handyman Robert Murphy said the costume, made in collaboration with Concordia University's Milieux Institute for Arts, Culture and Technology, is the first in what the group of Montreal crafters hope will become a holiday tradition. Next year, Chad the dragon -- a name picked by Emile -- will be passed on to another kid as the team embarks on its next wheelchair-customized Halloween creation.

The project, which is called Rolloween, is part of a growing push in Canada to make the frights and delights of Halloween more inclusive for children with disabilities and special needs.

In a Vancouver suburb, Lucille Ayers said thousands of people flock to the Coquitlam Halloween House over 12 days of wheelchair-accessible thrills including a pumpkin patch, graveyards, fortune tellers and eerie effects.

Ayers said it's her 19th year of turning her home into a house of horrors, and all proceeds have been donated to Variety, a charity for children with special needs, which is why it was important to her family that the spooky attractions were accessible.

"All of the children in the charity that Variety helps have disabilities, so we want to emulate that," she said. "We take the extra time with them. They come out; they're just beaming. It's just things they don't ever get to do."

That mission extends to the adult volunteers who help out with the event, said Ayers, many of whom have special needs.

"So often, (people with disabilities) are isolated," she said. "I think every opportunity they can get to participate in the typical community, and be a part of it, is really important. I think that should be happening all the time."

In Toronto, Frolic's Haunt aimed to accommodate as many visitors as possible -- recruiting ASL interpreters, ensuring there's enough light for visually impaired guests, and avoiding ableist props like straight-jackets -- for its one-day event, which was cancelled Saturday on account of bad weather.

Allan Marriage, who works at Toronto's Holland Bloorview Kids Rehabilitation Hospital, said a haunted house would be too much for his scare-sensitive eight-year-old son, Liam, who spent the summer making a costume inspired by the video game Minecraft that would work with his mobility device.

"It's something he looks forward to. More than the candy even, I think he likes the dressing up, and the celebration of it," said Marriage. "I think for a lot of kids with special needs, Liam included, you need to adapt your costumes to be able to participate."

Marriage said there are simple adjustments parents can make to ensure that kids with disabilities can enjoy the sugar rush of Halloween, such as bringing the bowl of treats down to the driveway where children in wheelchairs can reach them, and going easy on the effects so as not to overwhelm those with sensory issues.

But more than costumes and candy, Marriage said children with disabilities want to trick or treat with other kids.

"I think being invited ... is like the biggest thing that other families can do for families of kids with special needs on Halloween," said Marriage. "We're a part of society, and we need to be included."