For plenty of delicious fruit, be sure to prune fruit trees 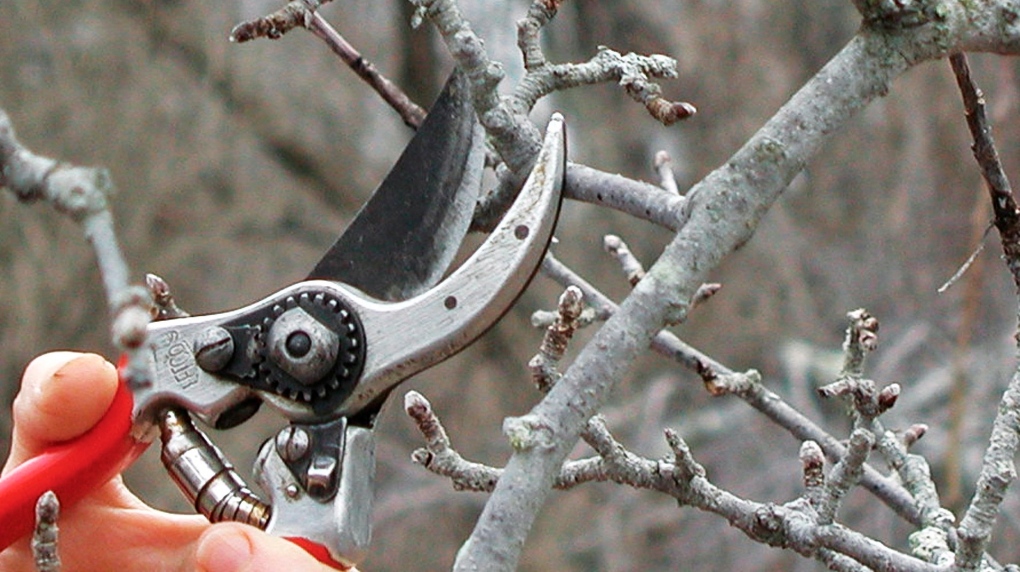 This undated photo shows part of an apple branch being pruned in New Paltz, N.Y. Apples bear fruits on long-lived, stubby spurs, but even these must be pruned eventually to stimulate younger, new spurs and keep them from overcrowding. (Lee Reich via AP)

If there's one group of plants that cries out for regular and careful pruning, it's fruit trees.

Taste the sweetness of a perfectly ripe pear: That sweetness represents energy, and that energy comes from sunlight. With proper pruning, all the limbs of a fruit tree bask in sunshine.

Pruning also helps these trees strike a balance between shoot growth and fruit production, so important in making sure they bear large, luscious fruits year after year. Those shoots are needed for energy-producing leaves and for places on which fruits hang.

The first years are important to a fruit tree's future performance. These are the years to help your tree lay down a permanent framework of branches that can support loads of fruit and not shade each other.

Centuries of fruit growing have spawned many different forms for trees, but three predominate: the central-leader, the open-centre, and the modified-central-leader.

All these forms allow a tree to "harvest" enough sunlight. The ideal form for a particular tree depends not only on your whims, but also on the plant's natural growth habit.

GET YOUR TREE IN SHAPE

Begin pruning any new tree by cutting back broken stems and dead or diseased wood to healthy tissue. If your new tree is but a single stem (called a "whip" by nurseries), shorten it by one-third to promote branching. If it is already branched (the "feathered tree" of nurseries), save well-placed stems and completely cut away all others.

The ideal branching arrangement starts about 2 feet from the ground and continues in a spiral arrangement up the trunk with about 8 inches between branches. In the case of the open-centre tree, lop off the central stem just above the third branch.

In the case of the central-leader and modified-central-leader trees, induce the main stem to keep making new branches by cutting off about a third of the previous season's growth each year while the plant is dormant. The top bud grows to become an upright shoot, a continuation of the leader, and lower buds become side branches. Select new side branches that are well-spaced along the leader.

Once a fruit tree is mature and beyond the training stage, then pruning it well means striking a balance between shoot growth and fruit production. How to achieve this balance depends on how -- or really where -- a particular tree bears its flowers and how big its fruits are.

Especially with large fruits, such as apple and peach, individual fruits tend to be undersize and less sweet with too heavy a crop. Pruning also removes some potential fruits so the plant can pump more energy into those that remain.

Once a tree matures to start bearing fruit, each year prune some stems and remove others completely. Shorten stems where you want regrowth and increased branching. Completely remove stems where you do not want such regrowth, such as where stems are overcrowded. Complete removal is also the way to deal with those vigorous, upright shoots called watersprouts, which are not fruitful and tend to shade lower portions of the plant.

The kind of tree you are pruning dictates the overall amount of pruning needed. The younger the stems on which fruits are borne, the more stems need to be shortened.

At one extreme are peach and nectarine. They bear fruit only on stems that grew the previous season, so need fairly severe annual pruning to stimulate an annual flush of vigorous, new shoots for the following year's crop. Prune enough so that a bird could fly right through the branches.

Apple and pear trees, at the other extreme, bear fruit on long-lived, very short, knobby branches, called spurs, so need little such annual stimulus. Eventually, though, even spurs need pruning for rejuvenation and elbow room.

Most other fruit trees lie between the extremes of apples and peaches in bearing habit and severity of annual pruning needed. Again, completely remove some stems and shorten others to achieve a good balance of fruiting wood and stem growth.