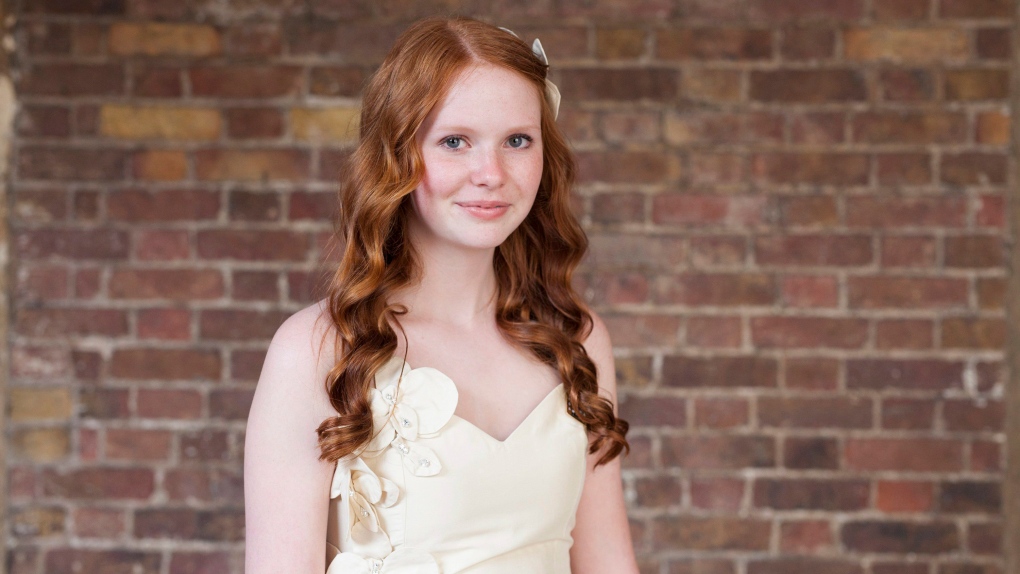 Faith Dickinson is shown in a handout photo. A 15-year-old Ontario girl who scored an invitation to Prince Harry and Meghan Markle's wedding says she's now being approached by designers who want to dress her for the big event. THE CANADIAN PRESS/HO-The Diana Award MANDATORY CREDIT

PETERBOROUGH, Ont. -- A 15-year-old Ontario girl who scored an invitation to Prince Harry and Meghan Markle's wedding says she's now being approached by designers who want to dress her for the big event.

Faith Dickinson says the whole experience is "like a dream" and she's looking forward to getting dressed up for the big day.

The Peterborough teen earned the coveted invite for her charity work as the founder of Cuddles for Cancer, which makes blankets for cancer patients and veterans living with post-traumatic stress disorder.

She's one of seven winners of the Diana Award chosen to watch the nuptials from the grounds of Windsor Castle on May 19.

While overseas, Dickinson says she'll be scouting opportunities to expand her charity to London, where she says she's received interest in a U.K. outpost.

Dickinson says there are already plans to open a second location of Cuddles for Cancer in Edmonton.

The whole process has been "overwhelming," she adds.

"We've been into some stores and they've been like, 'We would love to dress you and make a hat and fascinator.' It's very exciting in that way," says Dickinson, who attends a performing arts high school.

"You dream of this when you're a kid, right? Like, getting all dressed up to go to a royal wedding. It's so surreal."

Dickinson says the details of her trip are still being worked out but that she's been told to clear her schedule the night before the wedding and all day on the 19th.

She met Prince Harry and Prince William last year when she won the award named after their mother, given to youth who display leadership and philanthropy.

"I got to meet them 20 minutes before the actual awards ceremony and we got to talk and I was very nervous and the staff just said, 'It's all right, just shake their hand like they're normal people.' But it's pretty difficult," she says.

"They felt very personable and they were both very down to earth. They were just so nice."

During her London trip, she and her parents visited Princess Diana's island burial site on the grounds of Althorp Estate in Northamptonshire, England. This time, they're musing on a trip to see family in Scotland.

In the meantime, Dickinson says she's still getting used to all the attention, which has been "a little bit overwhelming."

"I used to get the odd interview when something happened, we use to get minimal press, but this time it blew up -- everyone was calling me and I couldn't answer because I was in science class and math class and I was getting texts from people," says Dickinson, who considers herself a dancer but also has a handful of acting credits in music videos.

She's also dedicated to her charity, which she founded at age nine when her aunt said cancer treatments made her feel cold.

Since then, Dickinson has made more than 3,000 blankets, each personalized with details about the recipient's hobbies or favourite colour. They've been sent across Canada, the United States, United Kingdom, Germany, Brazil, Australia, France and Africa.

She's raised more than $30,000 to provide them for free to those in need and says she's now seeing a boost in donations, and more demand.

"We've had interest over there about opening a Cuddles for Cancer in London. That might be cool, I may be have a meeting with some people who are interested," she says.

The wedding hoopla is undoubtedly one of the biggest things to happen to Dickinson.

"Even bigger than prom," she laughs.