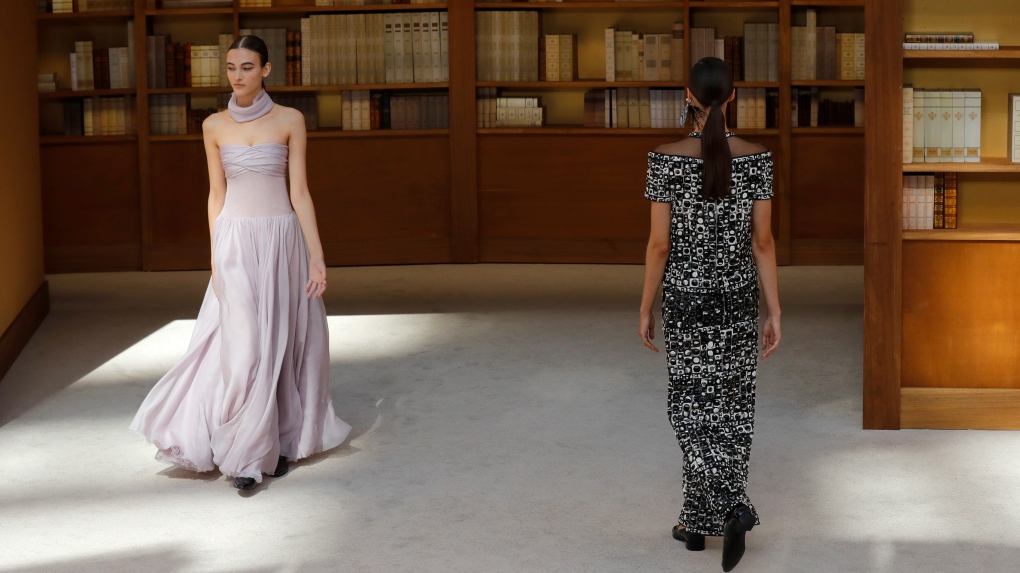 PARIS -- Chanel's new chief Virginie Viard merged the worlds of two of its most famous couturiers, those of Gabrielle "Coco" Chanel and Karl Lagerfeld, for a cerebral couture show in Paris set inside a huge circular library.

For Viard's first-ever solo couture show, both Chanel, the woman, and Lagerfeld, the house's longtime German-born designer who died in February, were invoked through their well-known passion for books.

The theme served to provide a sense of continuity for Viard's couture debut -- but it was a display that proved the relatively-unknown 57-year-old can hold her own.

Here are some highlights of Tuesday's fall-winter couture collections, including celebrity-magnet Armani Prive.

Lagerfeld's personal library of around 300,000 books, with its several librarians, featured prominently during a poignant memorial for him last month.

"It's an illness, I'm not afraid to admit it," he once said.

So, it was a touching gesture by Viard -- his longtime head of studio -- to keep his memory alive at the Chanel fall-winter couture show by creating a two-level library in the Grand Palais, bursting with tomes of classic French writers such as Baudelaire and Verlaine on wooden shelves, to display the designs.

Viard did not need a crutch to sell her couture, however.

In her first major calendar fashion show, she demonstrated a distinct artistic flair and vision that will take Chanel confidently into the future.

Models wore spectacles and preppy buttons, but the gimmicks gave way to a fluid and glimmering 70-look collection of gowns and signature skirt-suits.

"Chanel does not write with paper and ink... but with material, with forms and with colours," said writer Roland Barthes, according to the program notes.

Elongated silhouettes and emphasized necks provided the form. Tweed, velvet, wool crepe mixed with lace and chiffon to provide the material. While, embroidered sequins and bursts of bright colour on an otherwise powdery palette provided the hues.

Stand-out garments, such as a glistening multicolored circular bustier with delicate embroidered flowers, showed off both the talent of Chanel's famed seamstresses and the promise of its newest design star.

"The woman she created today is really poetic and really powerful at the same time. She creates very androgynous silhouettes but they are very feminine," she said.

Tonkin said she was happy that Chanel again has a female designer at the helm, at a time when its rival, Dior, also named its first female designer in history, Maria Grazia Chiuri.

"Chanel feels like a house that empowered women to feel strong," Tonkin, an Australian actress and Chanel ambassador, said.

The rival to Chanel in terms of star-power, Giorgio Armani's fall-winter display was held symbolically in the Petit Palais, the palace located opposite the Parisian stalwart's morning show venue.

Style-wise, the program notes for the Italian veteran designer said he went this season to the "folk" styles of the late 80s.

If this was folk, it was an extremely monied version of it, expressed essentially through ethnic earrings, quirky silk head pieces and graphic detailing.

The signature tailored suits with tapered pants began the looks, and in doing so reminded guests that this was a designer who, of course, first cut his cloth in menswear.

Polka dots that diverged in size provided one key theme and came as giant circles on a full mat-weave skirt in black, or in clusters on a pair of shimmering pants.

Gowns embroidered in light-reflecting crystals, which were delivered in powdery colours, ticked the haute couture box. But in the collection's 82 looks, there was a feeling that this has all been seen before.

Poetry was at the heart of a sublimely sensitive display by Givenchy's talented designer Clare Waight Keller.

Inside the historic stone interiors of Paris' Musee des Arts Decoratifs, floating feathers contrasted with dropped forms -- produced by low-lying crinolines -- to produce a collection of couture that literally played with gravity.

The unexpected was everywhere.

The fronts of gowns in white sometimes contrasted, in a truncated fashion, with a back piece that was a pair of pants.

Mysterious piano music held guests, in a mood of suspense during the show that seemed to tap into a dream state.

Models' hair was swept up like the feathers of a crow, and indeed this style merged with genuine feathers -- a move that seems to merge animal with human, and human with clothing.

In a display of costume-style designs, animal totems were the order of the day.

While, black lacey figure-hugging gowns looked like a gothic version of Zena Warrior Princess. It was imaginatively mad-hat but lacked a certain finesse.