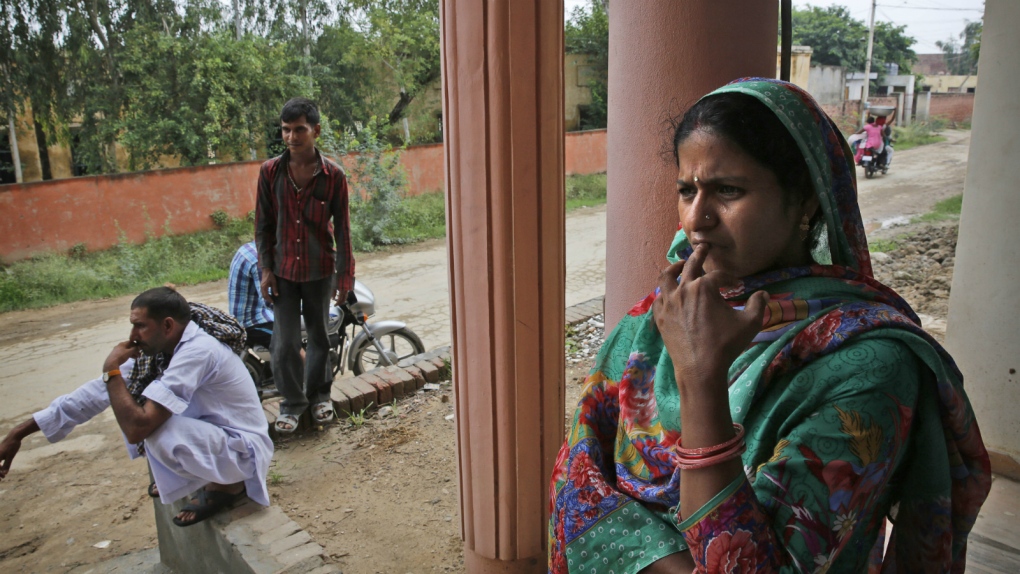 Sreeja Berwal, who is from the Indian southern state of Kerala, stands outside a rural bank in Sorkhi, 150 kilometres west of New Delhi, in the Indian northern state of Haryana. A shortage of brides in Haryana is the direct consequence of the skewed gender ratio in the state. (AP / Manish Swarup)

SORKHI, India — When Sadhuram Berwal wanted to get married, his family went about it in the traditional Indian way, asking relatives, neighbors and local temple priests to suggest a young woman. But after an extensive search among women of his caste in his area, no suitable bride could be found.

A larger factor had narrowed the field sharply: a skewed male-female ratio that is particularly pronounced in his home state of Haryana, in India's north, due to sex-selective abortions in a society where many families prize boys over girls, mostly for economic reasons.

Through a friend, Berwal eventually found a woman 2,700 kilometres to the south, in the state of Kerala, who was willing to marry him. But with a different language and profoundly different customs, she was overwhelmed by her new life.

That dramatic decision more than 10 years ago shocked his village of Sorkhi at the time but has become increasingly common these days in northern India, where the dearth of eligible women is starkest.

In Sorkhi, buffaloes roam the dirt roads, winding their way to a massive pond, the main feature of the sleepy village. Women go by driving slow-moving oxcarts, loaded with grass and other fodder for cattle. It's as if life has not changed over the decades in Sorkhi's bucolic routine, although the village of 7,000 is just 150 kilometres west of New Delhi, India's capital.

What has changed, however, is the glaring shortage of young women, says Om Prakash, a retired school teacher and influential village elder.

"In Sorkhi alone, there are around 200 to 250 young men who wish to get married, but their weddings are not taking place since they can't find girls to marry," said Prakash, as several elderly men sitting on rope-strung cots nearby nodded their heads in agreement.

India banned prenatal sex determination tests in 1994 after it became evident that families were aborting female fetuses. It is also illegal for medical doctors or technicians conducting sonograms to reveal the sex of a child before birth, but the practice still flourishes underground. Mobile medical vans made sex-determination tests accessible even in the remotest villages. Female infanticide is also a contributing factor.

In Haryana, the state with the most imbalanced sex ratio, there are 834 girls per 1,000 boys age 6 and under, according to census figures. Across India, the ratio has fallen to 919 girls for every 1,000 boys for the same age group, the most uneven level since modern India was founded in 1947.

Boy babies are preferred among many Indian families because of the heavy economic burden girls bring with their dowries, which often include refrigerators or motorcycles in addition to large sums of money and gold. While Indian law prohibits giving or receiving dowries, the tradition persists. Daughters are also considered less desirable because they will most likely move away from home after marriage and be unable to care for parents in their old age.

Given the imbalance, families of young women in Berwal's area have gotten pickier.

"Earlier, families with girls of a marriageable age would seek out boys and entice them with rich dowries. Now, it's the other way round. The girl's family checks out the boy. They want to know how much land the boy has, whether he has a government job and whether their daughter will live in reasonable comfort," said Virender Berwal, another villager as he took slow drags on his hookah pipe. The caste surname is common in the village.

The arrival of Berwal's wife started a trend in the village as more men sought wives from Kerala, usually through personal connections and word of mouth. There are also women from Bihar and West Bengal states to the east.

Several Kerala women who agreed to marry men in Haryana told The Associated Press they did it partly to avoid the oppressive dowry demands. The grooms' families agreed to pay all wedding expenses and did not take any dowry.

Activists say another consequence of the shortage of women in northern Indian states such as Punjab and Haryana is that human trafficking has become a lucrative trade. Agents procure girls and young women from different states in India, promising them jobs or a husband, and sell them to brokers in Haryana.

"This is happening on a large scale," said Jagmati Sangwan, general secretary of the All India Democratic Women's Association.

India's National Crime Records Bureau statistics reveal that nearly 25,000 girls and women ages 15 to 30 were kidnapped and sold into marriage across the country in 2013. Last month, New Delhi police busted a human trafficking ring that was selling girls to men in Haryana.

Women who move to Haryana to get married — especially those from the better-off south — face enormous adjustments.

When Sadhuram Berwal's wife, Anita, arrived in Sorkhi at age 28, she spoke her native Malayalam language, just a smattering of Hindi and not a word of the local Haryanvi language. Her 35-year-old truck driver husband was regularly away for half the month, making the first few months lonely and nearly unbearable, she said.

Her female neighbors were kind, though, and taught her words for everyday objects like broom and stove, she said.

"When I first came here, I didn't much care for the place. I couldn't go out, I couldn't contact anyone," said Anita, dressed in a long tunic and loose pants, a long scarf covering part of her face.

"Now I speak very good Haryanvi, almost as well as anyone else in the village. No one believes that I'm from Kerala. I speak like a native," she said as she served lunch to her two school-age children and her aged father-in-law, who lives with them.

Anita's neighbor Sreeja Berwal, who shares the same last name but is unrelated, agreed to marry a Haryana man because of her family's dire financial straits. Sreeja says her father lost his eyesight following an illness and then lost his job.

"We were four sisters. What could my poor mother do? The stigma of having four unmarried daughters was too much for her. When this offer came from Birbal's family, my mother said I was lucky," she said, referring to her husband.

The wedding was fixed after both Sreeja and her future husband had seen each other's photographs. Such arranged marriages are very common in India, but not usually over such great distances.

"His uncles spoke to my mother over the telephone. Then they came to Kerala and met me and my family," she said. "Within a couple of days, I was married and I came here."

With its high female literacy rates, Kerala affords women a greater degree of freedom when it comes to work or speaking out. But discrimination against women is more severe in Haryana and elsewhere in the north, which is generally less developed and where people are less educated. Girls are more likely to be deprived of food, education and health care, and women are expected to always defer to the menfolk.

Being an educated woman, a rarity in Sorkhi, Sreeja has found employment at the local farmers' bank, helping people fill out forms and complete other banking business. But she's had to get used to other customs, such as keeping her head covered with a stole in public.

"Back home in Kerala, only Muslim women covered their faces, while here, I was told married women had to cover their faces," said Sreeja. At her workplace, however, she is very much the bank official, brisk and businesslike, with her head uncovered most of the time.

And compared to the mild climate in the south, the extreme weather in Haryana — torrid summers and cold winters — was also hard to get used to. Sorkhi in the rainy season is hot and humid. Mosquitoes create a constant buzz and the still air reeks of buffalo dung and steamy vegetation.

"This is when I miss my home the most," Anita said wistfully. "But that was another life."