To tell the truth: Brain activity shows truth is more rewarding than lies 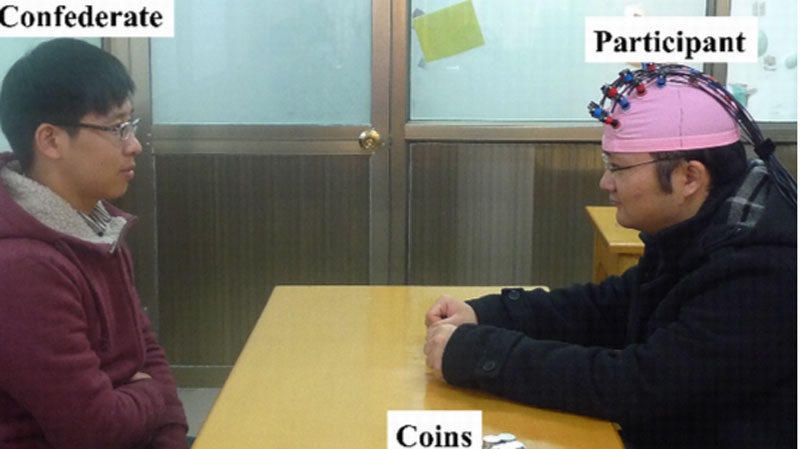 The set-up for the experimental study on lying by co-author Ding Xiaopan.

A new study from the University of Toronto suggests that lying uses up more "neural resources" than truth telling, and that adults would rather be rewarded for honesty than deceit.

The report, released Friday, is based on two studies of brain activity in participants in China. The studies produced two main findings, Dr. Kang Lee, a professor at the University of Toronto, said.

First, Lee said, the studies suggest that telling a lie uses up "more neural resources," than telling the truth.

Second, the studies indicate that the reward system of the brain responds better to prizes earned through honesty rather than lies. This even applies in situations when everyone knows the liar is likely being dishonest, such as in a poker game.

These findings suggest that the brain has an "intrinsic positive value for truth-telling," said Lee.

To reach these findings, researchers from universities in China and the University of Toronto studied images of brain activity that were created with technology called near-infrared spectroscopy.

"This is a relatively new imaging technique which uses laser lights to shoot through the scalp," said Lee.

The lights bounce off of the cortical surface of the brain and back to optical detectors that then create an image of the brain’s activity, according to how the lights have been reflected. Different oxygen levels in the brain's blood cells respond to the lasers in different ways and create patterns that show various levels of activity.

The report helps to explain a contradiction in behavioural studies, Lee said. Past studies have shown that humans find it difficult to detect when other people are lying, but that, despite the low risk of getting caught, most adults lie rarely.

Lee believes his study may offer clues to why that is. "(We don’t lie often) because lying costs more in terms of our resources and is not as intrinsically rewarding as truth telling."

Initial findings from a follow-up study on children suggest that lying is also more demanding on their brain systems. However, the follow-up study also indicated that, unlike in adults, children’s brains do not react more positively to rewards earned truthfully.

"That means they have yet to develop an adult's level of appreciation about the intrinsic value of honesty—at least from the brain’s point of view," said Lee.

Lee hopes that this method of research can be applied to studying pathological liars to understand why they may feel compelled—or enjoy—lying. "I suspect that their brain reaction patterns will be just the opposite because they show interest in lying and maybe they gain delight by telling lies," said Lee.

He hopes this research can eventually be used to help psychologists understand people with "psychopathic tendencies."