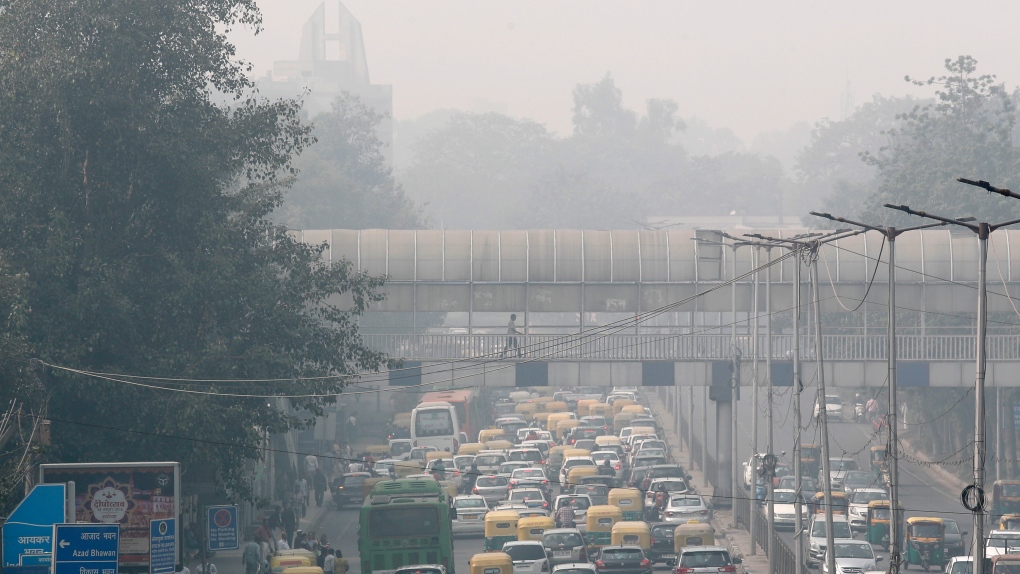 A pedestrian uses a foot over bridge to cross over as the city is enveloped under thick smog in New Delhi, India, Tuesday, Nov. 12, 2019. (AP Photo/Manish Swarup)

Short-term exposure to air pollution is linked to a higher risk of sudden heart problems, especially among older people, according to a study published Monday.

The study, published in the journal The Lancet, indicates that even low levels of air pollution can increase the likelihood of cardiac arrest. Study researchers at The University of Sydney say there is an "urgent need to reassess" international guidelines on air quality.

The research is believed to be the largest of its kind to date, according to the study's authors. They looked at data from emergency medical responses in Japan over a two-year period, as well as the country's records on air pollution involving particulate matter.

Particulate matter, or particulate pollution, is a mix of solid and liquid airborne droplets, according to the Environmental Protection Agency. The particles, made up of dust, dirt, soot or smoke, originate from construction sites, unpaved roads, fields, smokestacks or fires, and can contain different chemicals. But most particles are a mix of pollutants from power plant, industrial and vehicle emissions.

The study focused on PM2.5, or tiny particulate matter, which can move deep into the lungs when inhaled and from there into the bloodstream.

Researchers identified 249,372 cases of out-of-home cardiac arrest between January 2014 and December 2015. Cardiac arrest is the result of electrical disturbances that cause the heart to suddenly stop beating. One cause of sudden cardiac arrest is a heart attack.

Researchers found that with every 10 micrograms per cubic meter increase in PM2.5., there is a 1-4% increased risk of cardiac arrest.

For patients older than 65, researchers found a significant association between PM2.5 exposure and increased incidences of cardiac arrest.

Researchers also analyzed the data along gender lines but found no significant difference in how PM2.5 affects men and women.

Professor Kazuaki Negishi, a professor at the University of Sydney School of Medicine and the study's senior author, said the findings support "recent evidence that there is no safe level of air pollution."

Negishi added that the "tendency towards worsening air pollution -- from increasing numbers of cars as well as disasters such as bushfires -- the impacts on cardiovascular events, in addition to respiratory diseases and lung cancer -- must be taken into account in health care responses."

Researchers point to an increase in air pollution in Australian cities after massive bushfires ravaged the country. In the city of Richmond, west of Sydney, the levels of PM2.5 reached more than 500 micrograms per cubic meter -- far surpassing levels deemed safe for humans to breathe. Earlier this month, NASA said smoke from the historic blazes traveled "halfway across Earth," impacting the air quality in other countries.

The study concluded that "to date, no threshold level of PM is advised as safe for the general population," adding that "current air quality standards need to be reassessed with consideration for efficient strategies to reduce air pollutants to as low a level as possible."

Research published by The BMJ found a link between exposure to particle pollution and hospitalizations due to respiratory and cardiovascular problems. The study also found air pollution is related to hospitalizations caused by unexpected diseases such as septicemia, kidney failure, skin infections and urinary tract infections.

A 30-year analysis of more than 600 cities in 24 countries found that increases in air pollution were linked to increases in related deaths.

In the United States, a study published in the Proceedings of the National Academy of Sciences estimated that more than 100,000 premature deaths in 2011 were related to air pollution exposure.