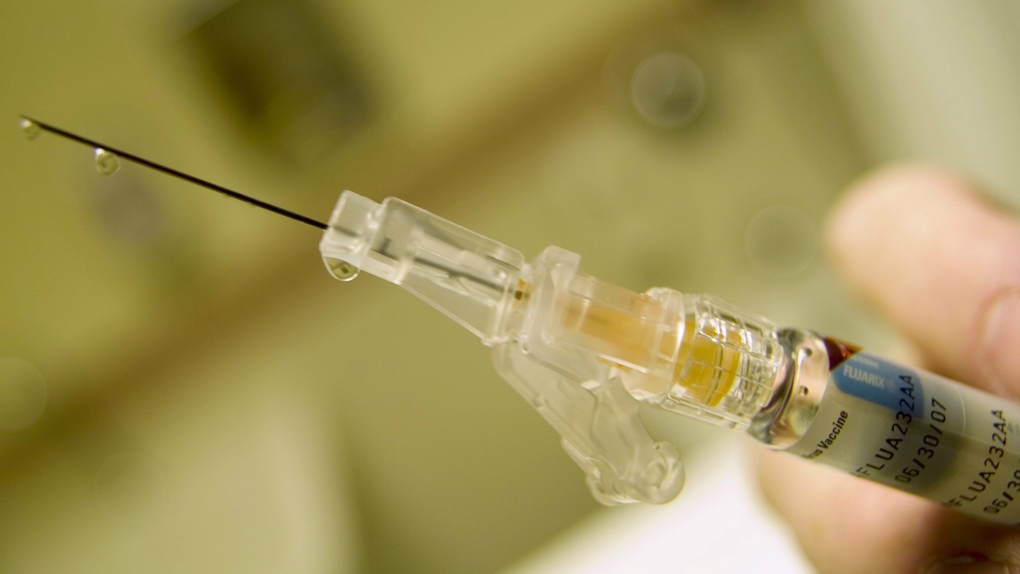 A syringe is seen in this undated file photo. (AP / Donovan Quintero)

VANCOUVER -- Canada's prisoner service is considering opening overdose prevention sites as it expands a needle-exchange program that is now offered at a fifth institution for offenders who inject smuggled drugs.

In a statement, the Correctional Service of Canada says it "is in the early stages of exploring overdose prevention sites as another harm-reduction measure option for inmates."

Proponents say Drumheller Institution in Alberta is being looked at as a potential site, which would allow offenders to use illicit drugs under medical supervision. The correctional service did not respond to inquiries to confirm that.

Jason Godin, president of the Union of Canadian Correctional Officers, said he has long lobbied for overdose prevention sites and that one has been proposed for Drumheller.

"At the very least, let's start opening up (the sites) so we can get away from the needle-in-the-cell thing," he said, adding supervised drug use would involve health-care professionals at a particular area in a prison instead of guards having to deal with inmates injecting smuggled drugs in their cells.

He said the needle-exchange program, which began last year, should be scrapped because nurses and doctors aren't available at most institutions after 4 p.m. in case inmates overdose so sites dedicated to prevention make more sense, as long as they are adequately staffed.

"So far, the government hasn't agreed to giving us 24-hour-a-day health care," he said.

"They want us to stop drugs from coming in and yet they're handing them a needle and saying go ahead and use drugs if you want to."

The correctional service said its needle-exchange program is aimed at preventing the spread of blood-borne diseases, such as HIV and hepatitis C, as well as skin infections from shared equipment as part of other harm-reduction measures including access to peer-support workers and the opioid substitution medications methadone and Suboxone.

Godin said at least two security issues have been reported since the needle-exchange program was rolled out, one involving a missing needle and another when an inmate left his injection kit out with the cell door open, potentially allowing unauthorized access to the equipment that could have posed a danger to guards or others.

The correctional service said there was only one incident when an offender did not follow proper procedure and the person was "reassessed and counselled," though it declined to provide details.

"Inmates who participate in the (program) are required to keep their needle kit safely stored in their cells," it said, adding a lost kit or one with unaccounted-for items as well as unauthorized use of equipment could result in an inmate being disciplined.

The service said 13 inmates have been approved for the needle-exchange program at the five institutions but only five people are participating in the program because the remainder were either released or transferred to prisons that have not yet begun offering the service.

Peter Brown, a former offender who served three federal sentences at various institutions in Eastern Canada between 1992 and 1999 for crimes including robbery, said a needle-exchange program as well as overdose prevention sites are essential behind bars because drug use is common.

Brown, 45, said he began using intravenous drugs in 1996 while he was serving time at the Atlantic Institution in Renous and continued until 2014, long after he was released.

"I shared, many, many times, syringes that other people used. I watched guys in there share needles in a group of five or six and sit around using the same syringe, going around in a circle," he said from Halifax, where he is completing a social services program while serving as a national board member for the Seventh Step Society, which provides peer support for ex-offenders.

Brown said he used bleach provided by the correctional service to repeatedly rinse his needles and syringes to try and avoid transmission of HIV and hepatitis C. The service said bleach is still distributed to inmates for that reason.

Sandra Ka Hon Chu, director of research and advocacy for the Canadian HIV/AIDS Legal Network, said bleach is not as effective a method of avoiding transmission of blood-borne diseases as clean needles, which the group began lobbying for nearly two decades ago in keeping with similar programs in many European countries.

Chu said the correctional service's needle-exchange program is "fundamentally flawed" because it provides inadequate access and the application process is onerous, requiring multiple levels of approval.

"You can be denied access for what they perceive as some incompatibility with the program that's not related to health," she said. "It's a health-care program at its very root and it's being framed as a security issue that's being prioritized over health and that's not something you see in the community."