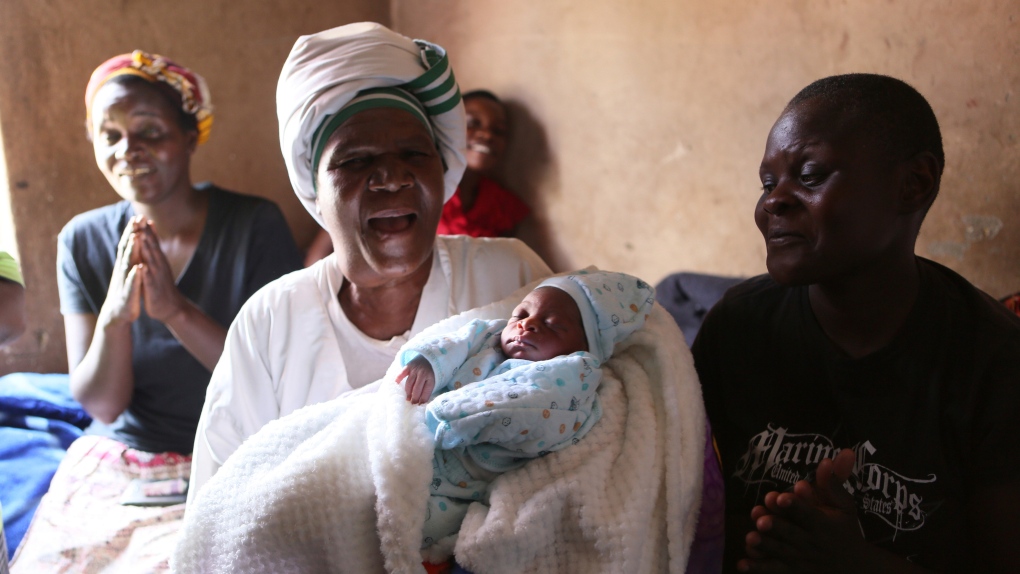 Esther Zinyoro Gwena holds one of the babies she has just delivered in her tiny apartment in the poor suburb of Mbare in Harare, Zimbabwe, Saturday, Nov. 16, 2019. Grandmother Esther Zinyoro Gwena claims to be guided by the holy spirit and has become a local hero, as the country’s economic crisis forces closure of medical facilities, and mothers-to-be seek out untrained birth attendants.(AP Photo/Tsvangirayi Mukwazhi)

HARARE, Zimbabwe -- When her contractions became unbearably painful, 18-year-old Perseverance Kanyoza rushed to a maternity hospital in Zimbabwe's capital, Harare. But the doors were closed amid a weekslong strike by public health workers. With no money for private care, panic set in.

A hospital guard directed her to a tiny apartment in the poor suburb of Mbare nearby. The midwife: a grandmother with no formal training and claiming to be guided by the Holy Spirit.

"It was a miracle," she told The Associated Press with a beaming smile. "I feared for the worst. I didn't know what to do after finding the hospital closed."

Her baby was one of dozens delivered in the past week alone with the help of 72-year-old Esther Zinyoro Gwena. She has become a local hero as the southern African country's worst economic crisis in more than a decade is forcing desperate women to seek out traditional birth attendants who often deliver babies using their bare hands with no sterilization or post-natal care.

Some worried Zimbabweans say Gwena's work only highlights the collapse of a health sector once regarded as one of the best in Africa. Doctors have been on strike for more than two months, seeking better pay than the roughly $100 they receive a month, and nurses and midwives in Harare walked off the job two weeks ago.

Since then, Gwena said, she has delivered more than 100 babies and no mothers have died. She doesn't charge for her services and helping stranded pregnant women is her concern.

"I never trained as a midwife. I started by befriending pregnant women at the church and then eight years ago I just started delivering babies. It is the holy spirit," she said.

"I have had no rest since the nurses' strike started. The work is becoming too much for one person. I am even losing weight," Gwena said.

She said she has been delivering up to 20 babies a day in her two-room apartment.

When the AP visited on Saturday, four pregnant women writhed in pain while sitting on blankets on the floor in the tiny living room-turned-maternity ward.

"They need the bed more," she said. "I rarely get time to sleep, they are always coming in ΓÇª in the middle of the night."

Neighbours, relatives of the pregnant women and some of Gwena's children, who help clean the blood, fetch water from a nearby well and cook, sat on a bench. Others stood in the packed room.

"Make way, another one is coming," one woman shouted. A heavily pregnant young woman walked in carrying a small plastic bucket, blanket and bag.

Less than two hours later, the number of pregnant women had swelled to 10, their bags piled in a corner. More stood in line in the hallway outside.

"I was apprehensive," said Grace Musariri, one of the women in line. "But I have already seen four women leaving with their babies in the few hours I was here. The fear is gone."

The makeshift maternity ward contained little but boxes of cotton and gloves donated by President Emmerson Mnangagwa's wife, Auxillia, who visited on Friday after Gwena's story made headlines in Zimbabwe's state media.

Before her visit "I used my bare hands," Gwena said. She asks women to bring their own razor blades, cord clamps and other items.

"My biggest challenges are space, water and protective clothing. I need help, and fast," she told a team of senior health officials who visited on Saturday.

She told them she had delivered 15 babies overnight and seven more before lunchtime.

One birth caused a brief scare. The baby popped out but seemed lifeless. Some in the room held their breath. Others screamed and the mother began to cry.

Gwena splashed water on the baby's forehead and the child let out a cry.

"She is so big," one woman exclaimed, joining others in cleaning a pool of blood from plastic that would be reused later.

"Throughout Harare there are a lot of traditional birth attendants," he said. "If you go to our clinics right now they are empty. Where are these women going to? They are now coming to deliver here. There are no follow-ups when these women have delivered. It's really worrying."

Chonzi said hygienic conditions such as water availability, infection prevention and disposal of placentas were a worry.

"There is no proper management of blood and blood products," he said. "After birth, what happens? There are certain processes that need to happen during labour and after labour both to the mother and to the child. These are now missed opportunities." Those include helping to prevent HIV transmission from mother to child.

The health director added, "I am really depressed, to say the least. Something needs to be done. This is not the way to deliver health services in an urban, local authority." He told Gwena he would put in a word with his bosses to provide her with more gloves, cord clamps, sterile linens and other items.

The pregnant women flooding Gwena's apartment are happy to receive any assistance as state-provided services either become unavailable or sharply deteriorate.

"Both my child and I could have died had it not been for Gogo (grandmother)," said Kanyoza, the new mother, making her way home.