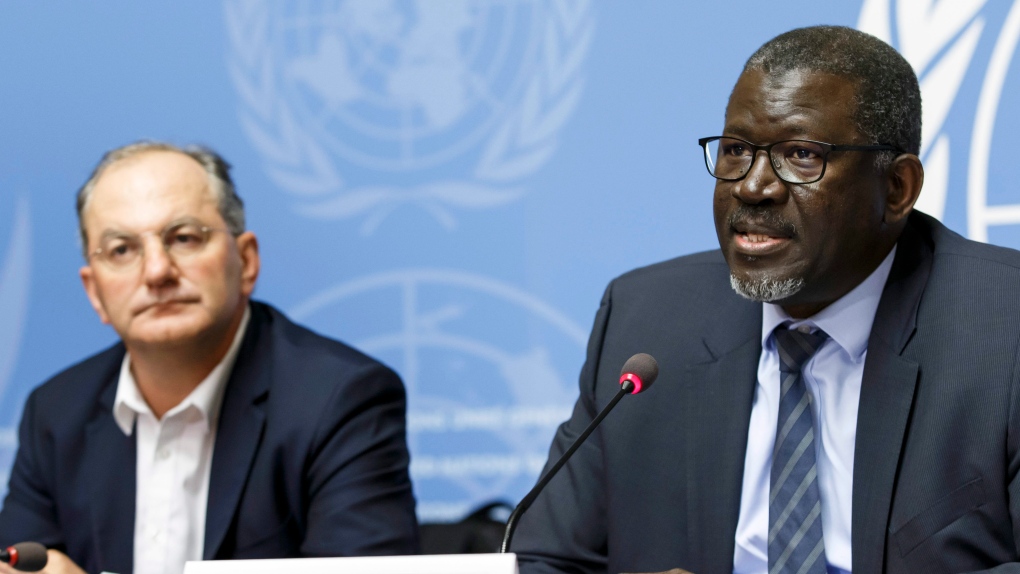 Peter Salama, left, Deputy Director-General for Emergency Preparedness and Response of WHO, sits next to Secretary General of the International Federation of Red Cross and Red Crescent Societies (IFRC), Elhadj As Sy, right, as they inform the media about IFRC's and WHO's response on ebola cases in the Democratic Republic of the Congo, during a press conference, at the European headquarters of the United Nations in Geneva, Switzerland, Tuesday, May 29, 2018. (Salvatore Di Nolfi/Keystone via AP)

DAKAR, Senegal -- More than 680 people have received Ebola vaccinations in the three health zones where dozens of cases of the deadly virus have been confirmed, Congo's health ministry said.

Health experts are pushing to find contacts of those infected, having already located more than 1,000.

There have been 37 confirmed Ebola cases, including 12 deaths. There are another 13 probable cases, according to the health ministry.

In an Ebola plan released this week by the World Health Organization, the U.N. health agency predicted there could be up to 300 cases in the coming months, noting there could be three times as many contacts to chase if the virus spreads in urban, as opposed to rural, areas.

Although WHO said "more than half" of newly confirmed Ebola cases had been previously identified, a substantial portion of cases are showing up that were not being monitored, meaning the disease is in some cases spreading unnoticed.

WHO also said officials would likely need more triage, isolation and treatment centres, possibly including one in the capital, Kinshasa. It said additional aircraft, helicopters and boats were needed to manage the challenging logistics of the outbreak and that it might ultimately cost $56 million to contain Ebola.

The U.N. health agency said that based on an initial assessment of Bikoro, "there is an approximate movement of over 1,000 people per day by river, road and air at major points of entry." It recommended that neighbouring countries strengthen their capacity to identify imported cases of Ebola, including by implementing exit screening.

WHO said the risk of spread to elsewhere in Africa was high but that the risk of global transmission was low. It added that even though experts had concluded the outbreak conditions do not currently merit being declared a global emergency, the situation would be reevaluated if the epidemic spikes significantly or if there is international spread.