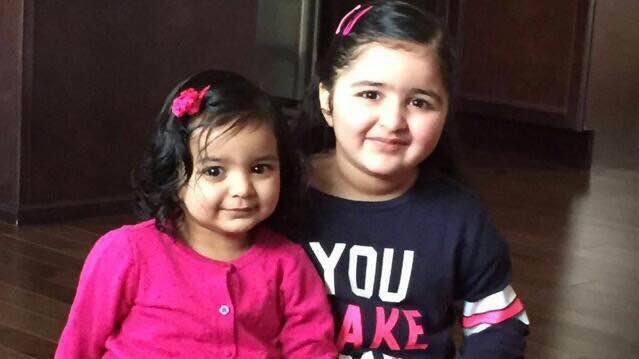 Tripat Kaur, a project coordinator with the Indo-Canadian Women's Association in Edmonton, says she's a "proud mother" of two girls. Her daughters Inayad (left) and Nikhad (right) are pictured above.

An unusually high proportion of male babies are being born to Indian-born women living in Canada who already have two or more children, according to a new study.

Two papers on gender imbalance published on Monday shows that a skewed sex ratio among Indian-born mothers has been apparent throughout Canada for at least two decades.

An Ontario-focused study published in the Canadian Medical Association Journal reveals that in the province, the gender imbalance increases significantly among Indian immigrants who have already had two girls and one abortion prior to the birth of their third child.

"All the previous papers published (about gender imbalance) looked only at the sex ratios and many inferred that this was due to abortion," lead author Dr. Marcelo Urquia, an epidemiologist at St. Michael's Hospital in Toronto, told CTVNews.ca in a phone interview.

Urquia said the Ontario study is the first to examine abortion data when looking at gender imbalance.

In a national study, published in journal CMAJ Open, the researchers examined birth certificate data of 5.8 million births to Canadian-born women and 177,990 Indian-born women between 1990 and 2011.

In the Ontario study, Urquia found that women who already had two daughters gave birth to 196 boys for every 100 girls.

The study also noted that:

The researchers "conservatively estimate," that 4,472 female fetuses of Indian immigrants living in Canada were "unaccounted for" over the last two decades.

"These are 4,500 girls who were not born and should have been born, if the sex ratio was balanced," Urquia explained.

Tripat Kaur, a project co-ordinator with the Indo-Canadian Women's Association in Edmonton, said the Indian-Canadian families she's worked with are usually fine with a first child being a girl, but there's often great pressure for a second child to be a boy.

"I know women who are really forced to get the child aborted," Kaur told CTV News.

She recalled one case in which a woman went against her husband's and mother-in-law's wishes and didn't have an abortion. Kaur said that the woman found herself without support from her family after the babywas born.

Kaur, a "proud mother of two girls," said in some Indian households, having a boy is thought to bring honour to a family.

"Having a boy brings respect from other families and from their friends," she said. "The girl is considered inferior."

Amrita Mishra, a project director with the Indo-Canadian Women's Association, said she'd like to see a ban on disclosing the gender of a fetus until the 30th week of pregnancy.

Mishra noted that Canada's Assisted Human Reproduction Act prohibits the sex selection of embryos before they're implanted via in vitro fertilization.

"There is no comparable law that prohibits sex selection in-utero," she said. "This problem is very partially Indian and hugely Canadian."

She said changing the regulations around revealing the sex of a fetus would "send a message that the law is not enabling these practices."

Some hospitals in Ontario have implemented policies that prohibit ultrasound sonographers from revealing the baby's gender to parents.

But Urquia said he doesn't believe these policies are effective in preventing sex-selective abortions.

"Ultrasound technology is widely available," he said. "Couples may go to a private clinic offering ultrasound services; they can go south of the border or even travel to another country and get the information they are after."

Urquia said there won't be any long-term implications from this gender imbalance in Canada, but he said the studies raise questions about the value certain communities place on women.

"These findings are showing us that there is, among certain immigrant groups, maybe a preference for males," he said.

"This raises questions whether these girls…are also at a disadvantage in infancy, childhood, adolescence or adulthood."

He continued: "This is a particular manifestation of that male-dominated culture around birth, but there might be some other biases affecting girls and women in other life stages."