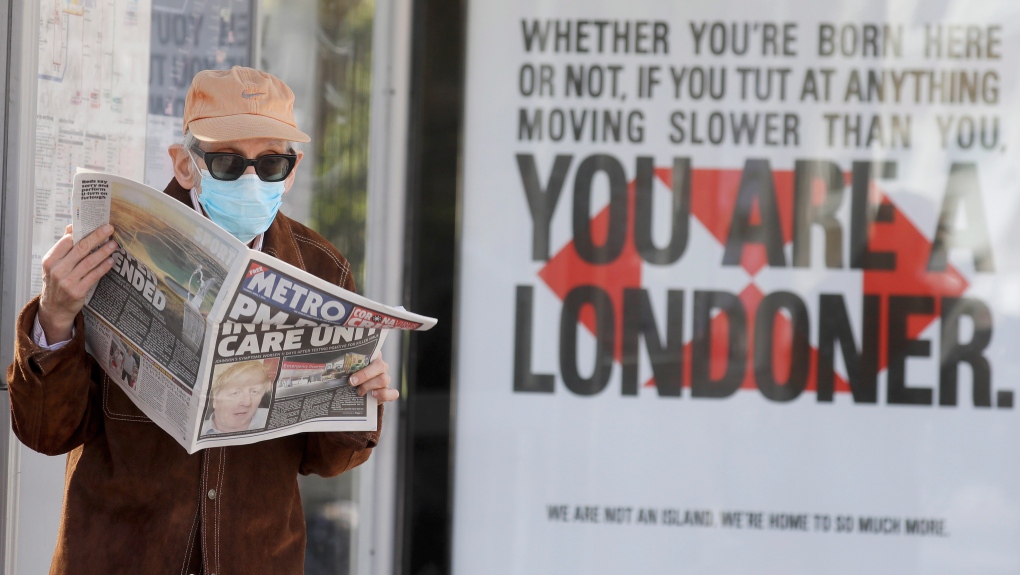 A man reads a newspaper with the headline: 'PM in intensive care,' outside St Thomas' Hospital in central London as British Prime Minister Boris Johnson is in intensive care fighting the coronavirus in London, Tuesday, April 7, 2020. (AP Photo/Kirsty Wigglesworth)

LONDON, U.K. -- A friend broke his wrist on a skiing trip in Switzerland a few weeks ago. It was a bad break that required finicky surgery and a few metal pins to patch it up. (With the addition of a lot of strong pain medication to get him through the drive back to the U.K.).

It was time for a checkup, so off he went this week to see the specialist at a private hospital in London. My friend is very smart and understood the risk of spending time in a potentially infectious waiting room. He arrived wearing a mask and latex gloves.

When he walked into the examination room, he was rather alarmed to find his doctor wasn’t wearing any protection, not even a simple surgical mask. His first thought: we’re worried as hell, and this guy isn’t taking it seriously.

That may not be fair to the doctor, but it’s a valid observation. We’ve all gone through a steep learning curve in how to avoid infection. Many of us feel vulnerable the moment we step outside, let alone into a pharmacy or a supermarket. And we still don’t have a clear answer on whether wearing a mask helps or not.

I mean, really. Is that so difficult to figure out?

I have another friend who practices at the same private hospital. He now wears a mask when he sees patients, and told me he covers his nose and mouth when he goes outside. He even thinks it’s a good idea to wear glasses to protect against infection through the eyes.

“Every breath,” he told me, “is the equivalent of a cough or a sneeze.” So when he sees patients, he pushes his chair against the wall “to get as far away as possible.”

And that brings us to this morning’s breakfast conversation. Are you ready to be captivated? Morally challenged?

She: “Ruth (our friend) thinks people are inherently selfish and that’s why they don’t take precautions.”

She: “People who think they’re immune from the virus. Who believe they won’t get it and can’t spread it. So there’s no need to do anything.”

This requires more coffee. It seems too early for a vodka Quarantini.

He: “So how is society supposed to respond to that?”

She: “I think it just makes everybody a little more selfish.”

As you can see, there’s some heavy talk going down in this bubble of isolation we and our fellow inmates now inhabit.

By the way, for anybody who’s having trouble keeping track, today is Tuesday. I know that because I look at my phone. My inspired daughter knows that because she inscribed the days of the week on different mugs -- excluding weekends. 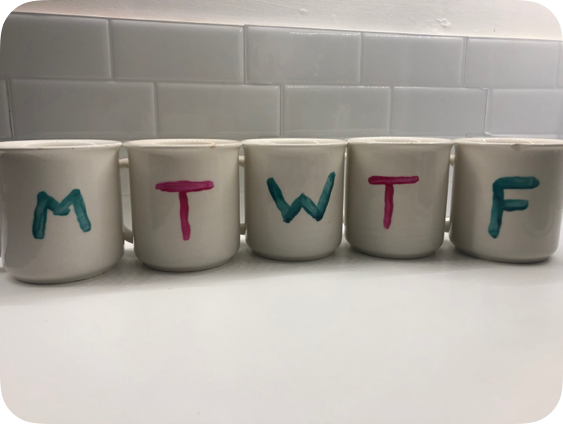 I have to say, it’s sort of like the prisoner who keeps track of his sentence by making scratches on the wall. We used to do that in Afghanistan when you were stuck on the Kandahar Air Base for eight weeks at a time. Counting down the days.

For anybody who doesn’t know, 15 looks like this. Maybe it’s the start of a trend. 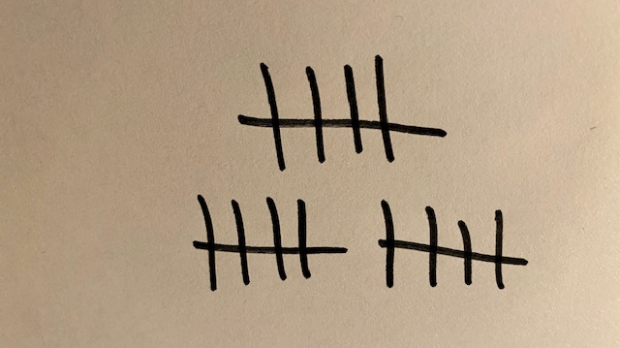