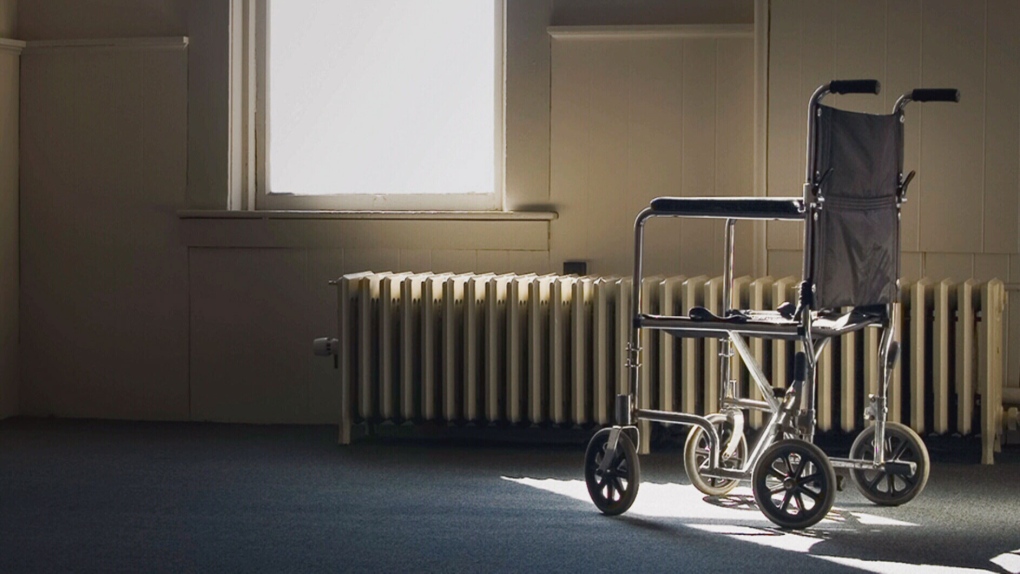 A wheel chair is pictured in a long-term care home. (File photo)

TORONTO -- Canadians age 85 and older account for more than half of the excess deaths reported amid the COVID-19 pandemic, according to new data from Statistics Canada.

Between March and June 2020, as COVID-19 spread across the country, Canada saw an estimated 7,576 excess deaths. That figure refers to deaths that exceed the number that would normally be expected during any given period of time.

"This reflects the fact that deaths caused directly by COVID-19 disproportionately affected the elderly. Over the same period of time, 8,345 people died due to COVID-19 and 4,615 (55 per cent) of those individuals were aged 85 and older," the publication on the Statistics Canada website explains.

Excess deaths over this period also affected females (53 per cent) more than males (47 per cent), according to StatCan. The agency says this again is in line with patterns for deaths caused by COVID-19.

"The difference between the two sexes comes from deaths among people over the age of 85, where more women than men have died of the disease. In the younger age groups, more men than women have died of COVID-19," the agency wrote.

The agency asserted that the updated figures are part of Statistics Canada's commitment to provide “timely and relevant information on COVID-19 and its impact on Canadians."

StatCan added that measuring Canada’s excess mortality provides an important benchmark for understanding the potential impacts of the resurgence of COVID-19 on certain communities.

EXCESS DEATHS IN THE SUMMER MONTHS

While these excess deaths skyrocketed in the early months of the pandemic, the agency found that there was a brief dip in July, when these figures returned to a "normal, pre-pandemic range," which according to the agency falls around 21,000 deaths per month.

At the national level, no excess mortality was recorded between July to the end of September.

However, the data reports that B.C. was the only province to record consecutive weeks of excess mortality in August and September, logging 807 additional deaths during this time.

The increase in excess deaths in B.C. may reflect increases in the number of deaths due to accidental overdoses, according to Statistics Canada. The province’s Chief Coroner's Office has reported increases in deaths due to overdoses since the start of the pandemic.

Males accounted for over two-thirds (69 per cent) of this excess in B.C., with men under the age of 65 accounting for approximately one-third of deaths. Over that same period, B.C. reported less than 40 COVID-19 deaths.

StatCan says these figures are an important indicator of both the "direct and indirect consequences” of COVID-19 and the health measures put in place to help address the pandemic.

The charts below plot the number of deaths reported by provinces on a weekly basis from the beginning of January until the end of September. The data is provisional, and because of reporting delays, do not reflect all the deaths that occurred during the reference period.

The difference in total deaths between 2019 and 2020 is shown in brackets. Years before 2019 are represented by faint grey lines behind the chart. Numbers have not been adjusted for populations growing year over year.