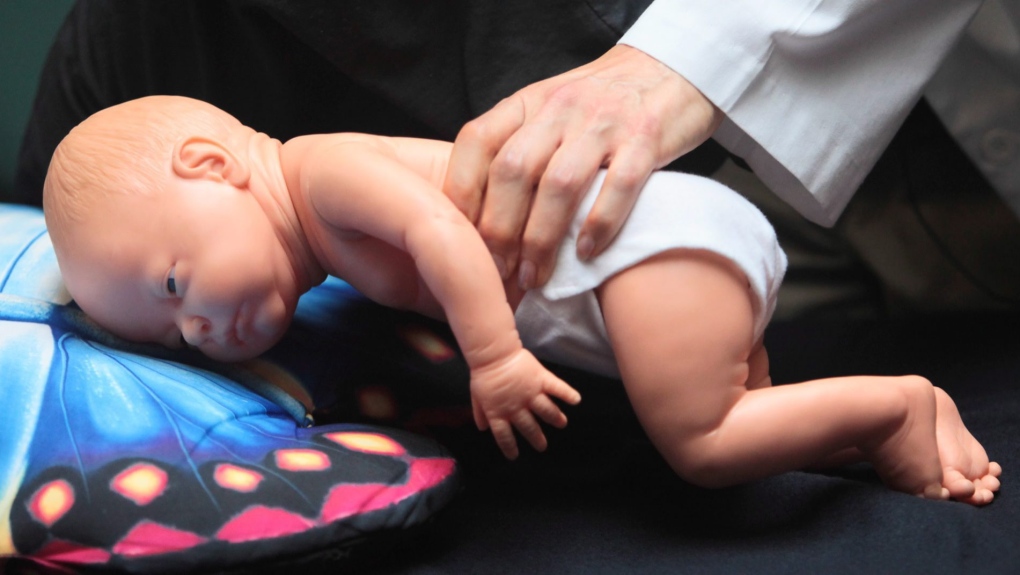 FREDERICTON -- The death of a three-month-old New Brunswick boy has prompted a call for a campaign warning the public about the dangers of unsafe sleeping arrangements for babies.

The coroner determined the infant, who was receiving child protection services, died accidentally of "asphyxiation secondary to an unsafe sleep situation."

The boy's death was revealed in a report from the province's Child Review Death Committee, although no further details were released.

But the review committee says current printed material about the dangers of bed-sharing and use of inappropriate sleep surfaces is not doing enough to prevent child deaths.

It urges the chief medical officer of health to consider a public awareness campaign that could include radio and TV ads.

The issue of bed-sharing or co-sleeping has been a matter of debate for years.

"The safest place for your baby to sleep or nap is in a crib, cradle or bassinet that meets current Canadian safety regulations," said Rebecca Purdy, a spokeswoman for the Public Health Agency of Canada.

"When babies sleep in places that are not made for them, such as an adult bed, sofa or armchair, they can become trapped and suffocate," she said.

Some parents and advocates like Dr. William Sears, an American pediatrician, talk up the benefits of bed-sharing or co-sleeping with the infant in the parents' bed.

"An infant and mother sleeping side by side share lots of interactions that are safe and healthy," he writes on his website.

"Sleep-sharing infants tended to sleep more often on their backs or sides and less often on their tummies, a factor that could itself lower the SIDS (sudden infant death syndrome) risk," he wrote.

But Purdy said the risk of suffocation is higher if a baby shares the same sleep surface with an adult or another child.

"The risk is even higher for babies less than four months old," she said.

Instead, she said placing your baby in a crib, cradle or bassinet next to your bed lowers the risk of SIDS.

Purdy said the best sleep environment for a baby is a firm mattress with a fitted sheet.

"Soft bedding, such as pillows, comforters, quilts and bumper pads, can increase the risk of suffocation," she said.

The Canadian Pediatric Society also warns against co-sleeping, saying babies should sleep alone in a crib.

On its website, the society says cribs made before 1986 or those without a Canada Safety Association label are not safe to use. It adds that adult beds, armchairs, waterbeds, couches, daybeds or any "make-shift" bed are not safe places for a baby to sleep.

It says car seats are important safety devices for travel, but when you get home, always put your baby to sleep on his or her back in the crib.