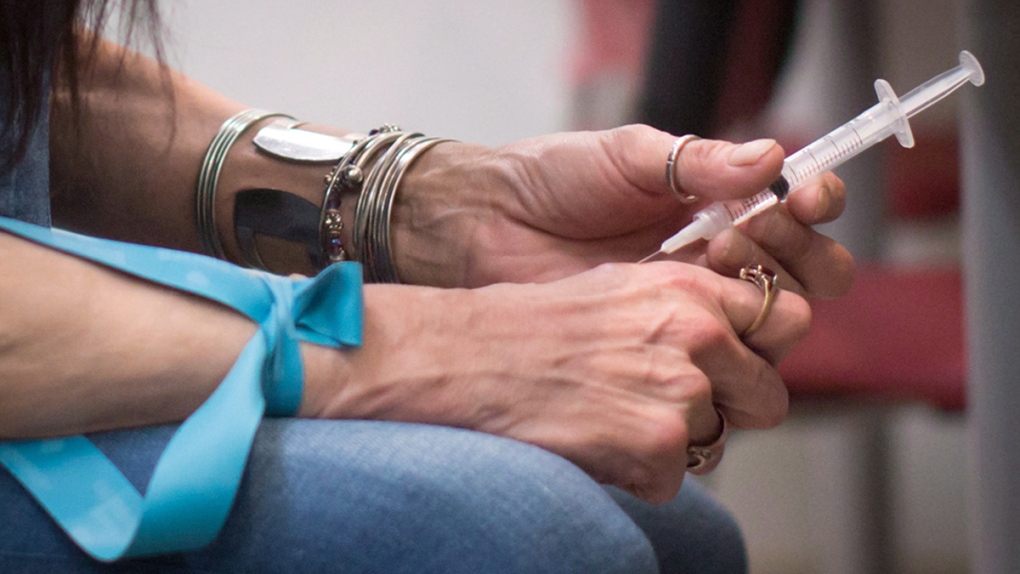 VANCOUVER - Making a safe opioid available in vending machines may be the next harm reduction tool to fight the deadly overdose epidemic, says the executive medical director of the B.C. Centre for Disease Control.

Dr. Mark Tyndall said he envisions a regulated system where drug users would be assessed, registered and issued a card to use in vending machines to obtain hydromorphone, a painkiller commonly marketed under the brand name Dilaudid.

"I'm hoping that it's kind of like supervised injection sites," he said of the program that could begin as early as next March. "At first it sounded a bit off the wall and now it's pretty well accepted."

Funding to expand access to hydromorphone would first be used to distribute pills through supportive housing units that also dispense methadone and suboxone as well as through a nurse at supervised injection sites before they are sold through vending machines, Tyndall said.

"People could pick these drugs up at supervised injection sites but there's no reason you couldn't use vending machine technology to do that. So people would show up, have their card, click it in and get a couple of pills."

Hydromorphone pills dissolve well in water and Tyndall said he expects most people will grind them up and inject them.

A small part of the funding will come from a three year, $1 million Health Canada grant that includes patients in Alberta, Tyndall said, adding the machines could also be placed in other areas where drug use is prevalent, as well as near health clinics in remote communities.

"We don't have really anything to offer people who are dying around the province in smaller communities, where sometimes they don't even have a doctor who can prescribe methadone and certainly will never have a supervised injection site," Tyndall said.

"You'd have to ensure there's some security system because we don't want people kicking these things in and stealing all the pills, and we don't want situations where people are taking out big quantities and selling them on the street."

Tyndall said while theft is a major concern of any opioid distribution system, anyone buying stolen hydromorphone pills would at least be getting safe drugs instead of those that could be laced with the powerful opioid fentanyl, which has been linked to hundreds of deaths across Canada.

Safeguards would also include supplying two or three pills, up to three times a day, to prevent users from being targeted by criminals, Tyndall said.

"We've done some focus groups and most people feel they'd be quite happy with two Dilaudids, eight milligrams, three times a day," he said.

However, people who are assessed as doing well could eventually obtain a two- or three-day supply of pills, much like take-home methadone, Tyndall added.

High-dose injectable hydromorphone is currently provided to chronic substance users at a Vancouver clinic called Crosstown, the only such facility that also dispenses diacetylmorphine, or medical-grade heroin to patients who have repeatedly failed to kick an addiction to illicit drugs after multiple drug substitution programs.

"This is not an addiction medicine response," Tyndall said, adding new approaches need to have an impact on the overdose epidemic. "We need to make this is pubic health thing, much like vaccine programs."

The B.C. Coroners Service has reported that 1,208 people fatally overdosed in British Columbia between January and October this year. It said fentanyl was detected in 999 of the confirmed and suspected deaths so far in 2017, an increase of 136 per cent from the same period last year.

Ontario's Health Ministry said the province has about half a dozen remote locations where prescription drugs are available through dispensing machines. Patients consult in real time with an off-site pharmacist using two-way video monitor in the machine.

Allan Malek, chief pharmacy officer of the Ontario Pharmacists Association, said Tyndall has floated an innovative idea during a national overdose crisis but it would have to be adequately monitored.

"In terms of what's happening in B.C. and other parts of the country, these are discussions that have to be had. People are dying. Something has to be done."