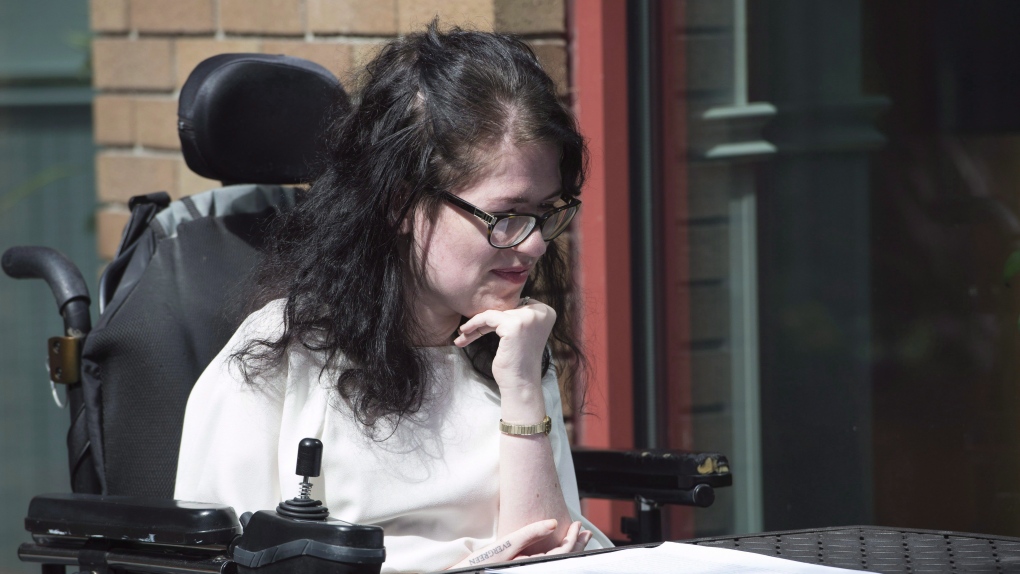 Julia Lamb, who has a degenerative muscle disease, pauses following a news conference in Vancouver, B.C., Monday, June, 27, 2016. Lamb has been told she qualifies for a medically assisted death, causing the British Columbia Civil Liberties Association to adjourn a lawsuit in her case.THE CANADIAN PRESS/Jonathan Hayward

VANCOUVER -- The British Columbia Civil Liberties Association and a woman with a degenerative illness have adjourned their lawsuit challenging the federal assisted-dying law after they say government evidence expanded eligibility for the procedure.

The law says that only people who have a "reasonably foreseeable" natural death qualify, but a government expert has filed a report that states some doctors are now interpreting this category to include people who refuse care that would prolong their lives.

Lead plaintiff Julia Lamb, who has spinal muscular atrophy but isn't facing an imminent death, said the relief she feels is "indescribable."

"For years a shadow loomed over me. I feared a future where I was trapped in pain and in forceful suffering as my disease would continuously progress but not kill me," the 28-year-old said at a news conference Wednesday.

"Now that all-familiar shadow has lifted."

Lamb said she is comfortable at the moment and still has ambitions to pursue in life, so she doesn't plan to seek an assisted death any time soon, but she's grateful to have the option.

The association and Lamb filed the lawsuit against the Canadian government in B.C. Supreme Court in 2016, arguing the law was too restrictive because of the "reasonably foreseeable" death requirement.

But a recent report filed by government expert Dr. Madeline Li, a physician and assisted-death provider with the University Health Network in Toronto, outlined a scenario in which some doctors would likely find Lamb eligible for medical assistance in dying.

Li wrote that initially after the law was enacted, medical practitioners were more cautious and only provided the procedure when a patient had a very short life expectancy. At the time Lamb filed the civil claim, the "reasonably foreseeable" death criteria may have been a barrier to her.

If Lamb requested an assisted death now, a doctor could find her eligible because she's at risk of developing a chest infection, Li wrote. If she was to stop using a ventilator that helps her breathe at night and refuse treatment for the inevitable chest infection, then her natural death would become "reasonably foreseeable."

"Canadian physicians and nurse practitioners have been on a steep learning curve over the past three years in interpreting Bill C-14 eligibility criteria," Li wrote.

"The law as it stands contains enough flexibility in the interpretation of the end of life criteria that it is not a barrier for practitioners who are comfortable with expanding access."

Li said in an interview that she did not personally assess Lamb and she intended her report to state that there are physicians who would likely find the woman eligible under the current law. She stressed that every case must be judged individually by a medical practitioner.

Refusing treatment as a route to assisted death is still legally vague, she added, as there have been no court rulings examining the practice, but the cases she knows of where it has happened have not prompted complaints to regulatory bodies or coroner's inquests.

No other expert in the case challenged Li's evidence on the matter, the civil liberties association said.

The association did not provide the full report because it said it was confidential and may only be disclosed by the Attorney General of Canada. But the association said it sought and obtained Canada's consent to publicly release its letter to the court seeking the adjournment, which quotes from Li's report.

The letter, written by lawyer Joseph Arvay on Sept. 6, says Canada consented to the request for an adjournment.

The federal Justice Department did not immediately respond to a request for the full report or for comment.

Grace Pastine, the association's litigation director, said the decision is a "huge victory for our client and for the many Canadians like her who might find themselves suffering unbearably with no end in sight."

"The government's expert evidence provides new clarity to health-care providers. It confirms that Canadians who are seriously ill and face enduring and intolerable suffering have the right to die with dignity, even if they are not at or near the end of life and their deaths are not considered 'foreseeable.' "

But Pastine said the organization would not hesitate to reopen the case if it learns that Canadians like Lamb are being denied their constitutional right to a compassionate and peaceful death.

The Supreme Court of Canada declined to hear an appeal in December in a bid to accelerate Lamb's lawsuit.

Earlier this month, Justice Christine Baudouin of the Quebec Superior Court ruled invalid the Criminal Code requirement that a natural death be "reasonably foreseeable" before someone can be eligible for assisted death. She also invalidated a section of the Quebec law that says people must "be at the end of life" to receive the procedure.

The civil liberties association said if the federal government doesn't appeal that ruling, reasonable foreseeability will no longer be a barrier to eligibility in Quebec after March 11, 2020.