Almost half of all First Nations families are 'food insecure': 10-year study 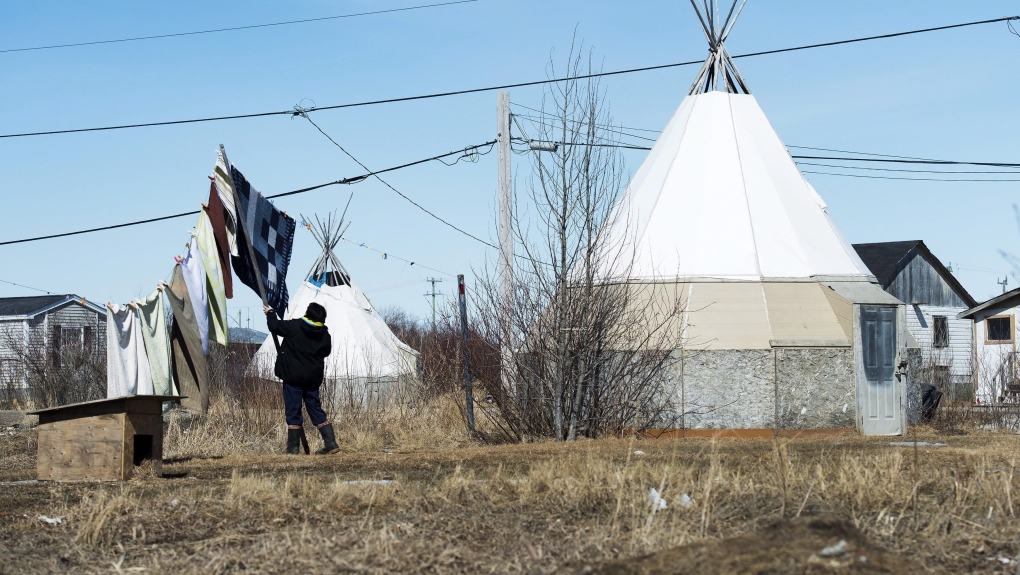 An indigenous woman takes down laundry in the northern Ontario First Nations reserve in Attawapiskat, Ont., on April 19, 2016. THE CANADIAN PRESS/Nathan Denette

OTTAWA -- Rates of obesity and diabetes are higher among First Nations adults than in the general Canadian population, while almost half of all Indigenous families have difficulty putting enough food on the table, a new study has found.

The findings are contained in the first full draft of the final report of the First Nations Food, Nutrition and Environment Study, released this week as part of a national Indigenous food and health forum in Ottawa.

Ten years in the making, the study offers the first comprehensive look at diet and nutrition patterns among Indigenous populations in Canada. It also looks at the role of traditional food in health outcomes and whether the food and water that is being consumed is safe.

The findings conclude that Indigenous communities are struggling with "extremely high" rates of food insecurity, a perpetual problem that has a dramatic impact on the health of residents.

Overall, 48 per cent of First Nation households have difficulty putting enough food on the table. Families with children are even more likely to struggle, the study found.

Food insecurity -- a term used to describe those who do not have enough income to cover their food costs -- was reported to be even higher among First Nations households in Alberta, where 60 per cent of Indigenous families are struggling to feed their families. That figure is more than seven times higher than the national food insecurity rate of 8.4 per cent. Those in remote communities with no year-round access to a service centre also reported significantly higher food insecurity rates.

One main culprit? Higher prices for healthy food in rural and remote communities compared to urban centres, making healthy food "beyond the reach of many families," the study says.

People are also finding it increasingly difficult to access traditional food, which is healthier and is foundational to the culture and traditions of Indigenous communities.

As a result, obesity and diabetes rates are soaring. Eighty-two per cent of all Indigenous adults are overweight or obese while one-fifth have diabetes, according to the data -- rates that are double and triple the national averages, respectively. Smoking rates are also significantly higher.

Malek Batal of the University of Montreal, one of the study's lead investigators, says the findings show governments must do more remove barriers in access to traditional food to help address the disproportionately high rates of First Nations food insecurity and the chronic disease.

One key trend noted by the scientists is that when traditional food is present, nutrition and diet quality improve.

However, more than half of Indigenous adults say harvesting traditional food has been hampered by industry activities and climate change.

"Traditional food is still of much better quality than the market food that is available to First Nations in most communities. The traditional food system is very important for health reasons, and obviously, for cultural reasons," Batal said.

"The study shows that it's an eco-systemic problem, that there are issues that have to do with the ecosystem, with the way we access traditional food, with the health of the species that people would like to harvest... but it's up to governments at different levels to recognize the rights of Indigenous peoples, in this case First Nations, to access traditional food in a healthy environment."

Among traditional foods like fish and game, the study found mostly normal ranges of contaminants, although pockets of problems were flagged. High levels of lead were found in some meat sources, such as bison, moose and birds, due to the use of lead-based ammunition for hunting. Higher intakes of mercury were also identified among some women in northern areas who consume pike and walleye.

Pharmaceuticals were also present in a significant number of surface water bodies near First Nations communities.

"This is not just a First Nations community problem, this is really a Canada-wide issue," Chan noted. "We are seeing more and more pharmaceuticals in surface water in many watersheds."

The authors of the study are urging government to "urgently address systemic problems relating to food, nutrition and the environment" affecting First Nations communities.

They provide a list of recommendations, including a call for more access to the traditional food system through a combination of subsidies to support growing, harvesting and food preservation. They are also calling for higher food prices in rural areas to be reduced by increasing community eligibility for subsidy programs, such as Nutrition North. They also believe government should provide more money to help ramp-up food production and distribution systems that are run by Indigenous people.

Batal says he hopes the research, which was the largest and longest study of First Nations health and nutrition ever in Canada, doesn't end up gathering dust.

"I think can governments can no longer ignore these results. When we look at those food insecurity rates, when we look at chronic disease, particularly diabetes and obesity, how can you not do something about that?" he said.

"If they turn a blind eye to these results, I would despair, because I think they're pretty clear."