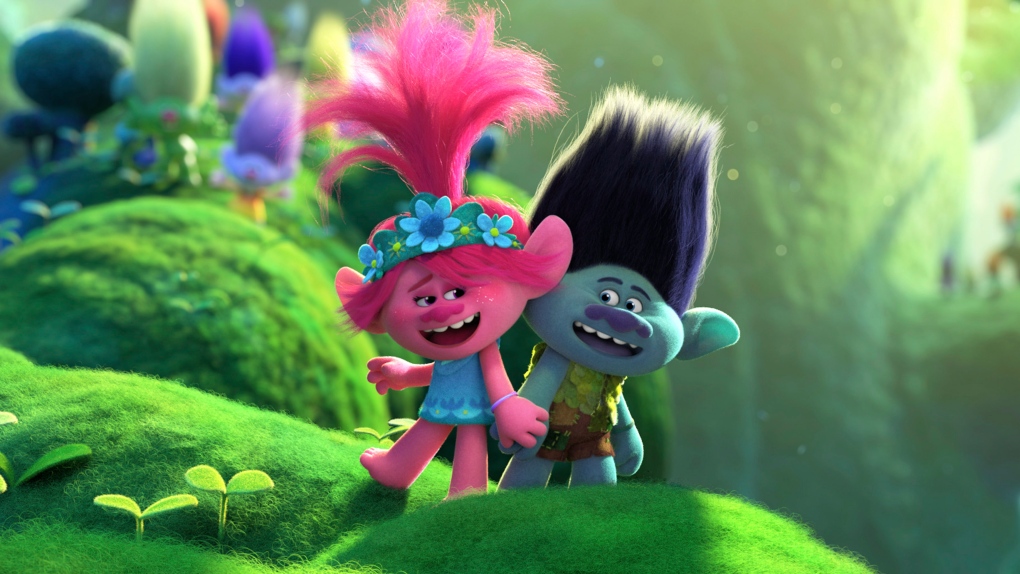 NEW YORK -- The most controversial movie of the year is ... "Trolls World Tour"?

As innocuous as the rainbow-colored, music-blaring animated movie may seem, the digital release of the "Trolls" sequel has caused a storm to course through the movie industry. Just as the pandemic worsened and movie theatres were shuttering, Universal Pictures shifted the film's release to video on demand, leading a charge straight through the theatrical window.

Universal calls the "Trolls World Tour" digital release a success and suggests it may be the beginning of a sea change in how movies are released. Theater owners strenuously disagree. AMC Theaters, the largest chain in the United States, is signalling an all-out war, saying it will no longer show Universal movies.

While few anticipated a skirmish would come over a glitter explosion like "Trolls World Tour," it has been long in coming. Netflix, Amazon and other streaming services have in recent years broken the industry's traditional theatrical window of 72-90 days (and thus had their films excluded from major theatre chains), and the major studios have sometimes been tempted to try their own luck and head straight to homes.

On Tuesday, NBCUniversal CEO Jeff Shell told The Wall Street Journal that the digital release for "Trolls World Tour" has gone well enough to demonstrate the viability of direct-to-home releases. He promised that even once theatres reopen, "We expect to release movies on both formats."

The Journal reported that in three weeks of $20 on-demand rentals, "Trolls World Tour" has grossed about $95 million. The studio, which normally splits sales approximately in half with theatres, pocketed about $75 million of that. A spokesman for Universal did not dispute those figures.

By comparison, 2016's "Trolls" grossed $116 million in U.S. and Canada and $346.9 million worldwide. The sequel cost a reported $90 million to produce, not including marketing costs that likely exceeded $50 million.

Whether that performance constitutes a "hit" or merely an intriguing pandemic-era experiment has been the subject of much debate. Under stay at home orders, the country's moviegoers are on lockdown. "Trolls World Tour" benefited by being the first such release during the crisis. And even in those extreme circumstances, it's made significantly less than the original film did. The rentals may have also eaten into other "downstream" home entertainment revenue sources.

"Universal does not have reason to use unusual circumstances in an unprecedented environment as a springboard to bypass true theatrical releases," said John Fithian, president and chief executive of the National Association of Theatre Owners. He touted the irreplaceable "beloved immersive, shared experience" of seeing a film in a theatre, adding that many families would have flocked to "Trolls" if "the world had not been sequestered at home."

AMC Theaters went further. CEO Adam Aron said his company would sever relations with Universal, effective Tuesday. He insisted the policy would continue once theatres reopened, would apply to its venues around the world and "is not some hollow or ill-considered threat."

Aron said AMC would do the same to any distributor that "unilaterally abandons current windowing practices absent good faith negotiations between us."

He declared absent further discussions, "decades of incredibly successful business activity together has sadly come to an end."

Late Tuesday, Universal responded it was disappointed with the AMC and NATO statements.

"We absolutely believe in the theatrical experience and have made no statement to the contrary," Universal said, adding it would consider video on demand "when that distribution outlet makes sense."

Universal has been bolder than other studios. A day earlier, Universal said it would steer another upcoming release, the Judd Apatow comedy "The King of Staten Island," to on-demand. It also quickly brought movies like "The Hunt" and "Emma," released in theatres just before the shutdown, to on-demand.

But the studio isn't the only one experimenting.

Warner Bros. will make the Scooby-Doo film "Scoob!" available for digital rental next month instead of waiting for theatres to open. The Walt Disney Co. is steering "Artemis Fowl" to its Disney Plus streaming service. Other studios have simply sold movies to streaming services. Netflix acquired the Paramount Pictures comedy "Lovebirds," once planned for a spring theatrical release.

Even the Academy of Motion Picture Arts and Sciences has been forced to embrace streaming. On Tuesday, it announced it will allow films without a theatrical release -- long a hot-button issue for the Oscars -- to contend at next year's Academy Awards.

Meanwhile, theatre chains are struggling with the losses incurred by an open-ended shutdown. AMC earlier this month issued a $500 million debt offering to keep itself afloat. It has furloughed some 26,000 employees as well as executives, including Aron.

But it remains to be seen if on-demand is a box-office replacement or merely a useful band-aid in unprecedented times. Would a more expensive movie be able to compensate for $500 million in box office? Or $1 billion? For now, only the likes of "Trolls," "Scoob!" and "Artemis Fowl" are testing the waters. The largest movies, including the Disney-Marvel release "Black Widow," the James Bond installment "No Time to Die" and "Wonder Woman 1984," are waiting it out.

Also on hold : Universal's "F9," which moved from this summer to next year. The other nine films in the "Fast & Furious" franchise have collectively grossed nearly $6 billion in worldwide box office.