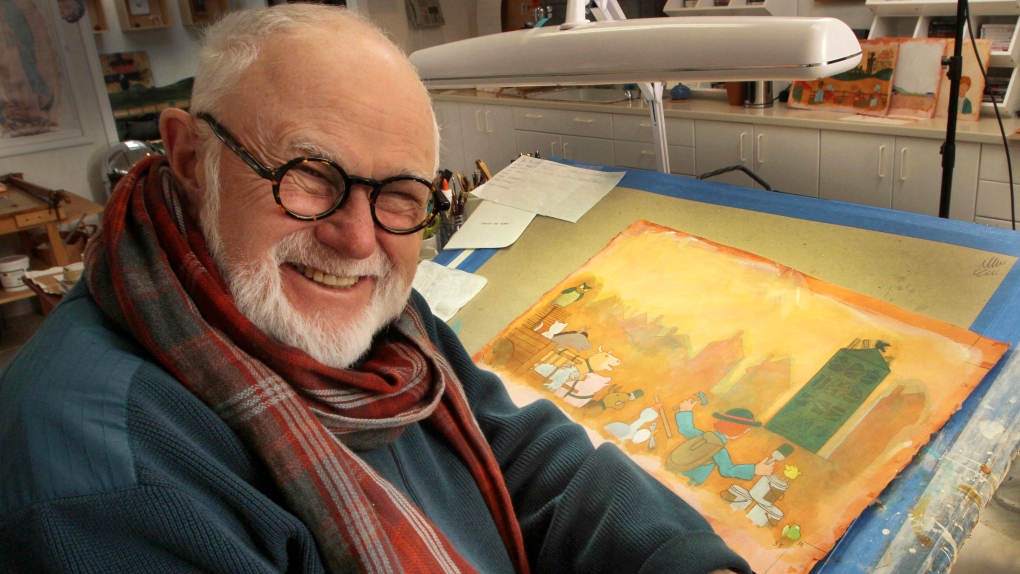 In this photo taken Sunday Dec. 1, 2013, Tomie dePaola poses with his artwork in his studio in New London, N.H. (AP Photo/Jim Cole, File)

DePaola died at the Dartmouth-Hitchcock Medical Center in Lebanon, New Hampshire, according to his literary agent, Doug Whiteman. He was badly injured in a fall last week and died of complications following surgery.

He worked on over 270 books in more than half a century of publishing, and nearly 25 million copies have been sold worldwide and his books have been translated into more than 20 languages.

Author Lin Oliver mourned his loss, tweeting that "He was a creator of beauty and a beloved friend." New Hampshire Governor Chris Sununu issued a statement, praising dePaola as "a man who brought a smile to thousands of Granite State children who read his books, cherishing them for their brilliant illustrations."

Strega Nona, his most endearing character, originated as a doodle at a dull faculty meeting at Colby Sawyer College in New London, New Hampshire, where dePaola was a member of the theatre department. The first tale was based on one of his favourite stories as a child, about a pot that keeps producing porridge. "Strega Nona: An Original Tale," which came out in 1975, was a Caldecott finalist for best illustrated work. Other books in the series include "Strega Nona's Magic Lessons" and "Strega Nona Meets Her Match."

Reflecting on her popularity, dePaola told The Associated Press in 2013, "I think it's because she's like everybody's grandmother. She's cute, she's not pretty, she's kind of funny-looking, but she's sweet, she's understanding. And she's a little saucy, she gets a little irritated every once in a while."

DePaola said he put Strega Nona in Calabria, in southern Italy, because that's where his grandparents came from.

He said over the years, the visualization of Strega Nona -- who grew out of his drawing of Punch from the commedia dell'arte -- became more refined. But his liberal use of colour and folk art influences in her stories were a constant. After saving her village from being flooded with pasta from a magic pot by her assistant, Big Anthony, Strega Nona went on to star or play a supporting role in about a dozen more books.

"I remember laughing at the pictures of Big Anthony, the townspeople, and even cute little Strega Nona," wrote one of his many fans in 2013, a woman who recalled her mother reading the book to her growing up. "She is ingrained in my childhood ... I hope to read Strega Nona to my kids one day."

In 2011, dePaola received a lifetime achievement award from the American Library Association.

"Tomie dePaola is masterful at creating seemingly simple stories that have surprising depth and reflect tremendous emotional honesty," the committee chair Megan Schliesman said at the time. "They have resonated with children for over 40 years."

At age 4, dePaola knew he was going to be an artist and author -- and he told people so. He received a lot of encouragement from his family. "They gave me half of the attic for my 'studio.' Now, how neat is that?" he said.

His family, in turn, became central characters in a number of his autobiographical books, such as "26 Fairmont Avenue," about growing up in Connecticut during the Great Depression, and "The Art Lesson," about reaching a compromise with his art teacher on drawing in class. The former received a Newbery Honor Award in 2000.

DePaola wrote about doodling on his bedsheets and on his math work in second grade, telling his teacher he wasn't going to be an "arithmetic-er."

Many of his books bring to life folktales, legends, and spirituality -- he often incorporated images of a white dove among the pages. Christmas, his favourite holiday, was a popular subject of many of his works exploring traditions of the season, and offered some storylines for Strega Nona.

In 2013-2014, dePaola had two exhibitions at Colby-Sawyer College, "Then," and "Now." The first showed his early artistic efforts, his formative years at the Pratt Institute and his work, influenced by Fra Angelico and George Roualt, among others; the second came out shortly after dePaola turned 80 and it focused on his more recent artwork.

"Even though I love doing my books and I try to be as creative as possible, there's always a restriction," he said in 2013. "I have to please other people, I have to please my art director, my editor, and then there's all the public to please. Some of the books I've considered my best artistic personal accomplishments aren't necessarily the books that appeal to children. And that's OK."

DePaola spent much of time working in his 200-year-old barn in New London, which houses his studio and library. It includes wall niches displaying folk art and a corner with a chair facing a small altar, where he meditated. More Native American, Mexican and early American folk art decorated his nearby home.

DePaola received many letters through the years from children with questions about his life and books, and he often took the time to chat with them at book signings and other events. It was always important to him to keep that voice active.

"I just keep the inner critic," he said in an interview. "Don't let the little 4-year-old get jaded. I listen to him. He stands beside me and says, 'No, I don't like that."'