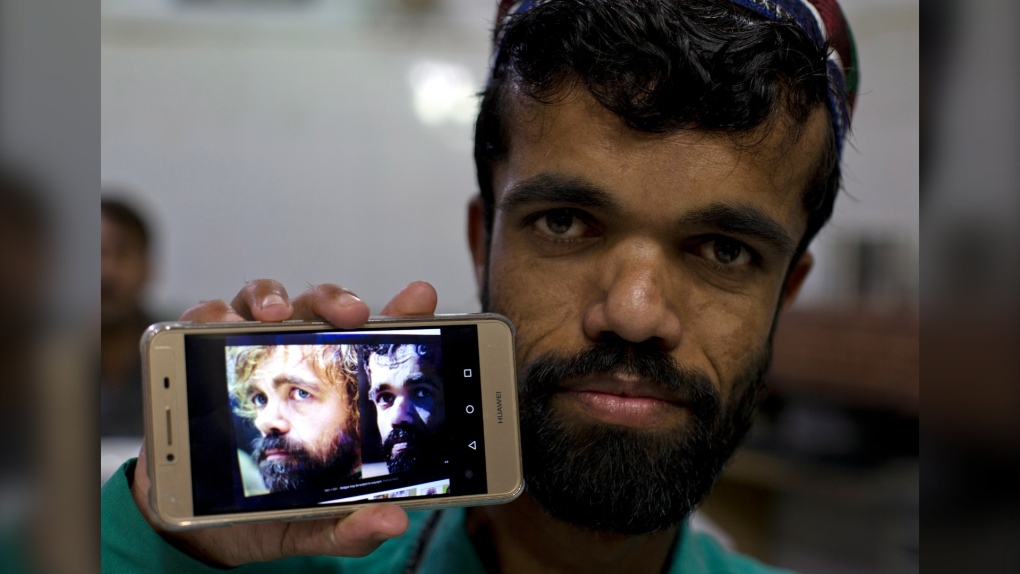 In this Friday, May 3, 2019 photo, Rozi Khan, a 26-year-old Pakistani shows his picture on his phone next to a picture of the U.S. actor Peter Dinklage who plays Tyrion Lannister on the TV series‚ "Game of Thrones," in Rawalpindi, Pakistan. (AP Photo/B.K. Bangash)

RAWALPINDI, Pakistan -- Until recently, a Pakistani waiter working in a small cafe in the city of Rawalpindi knew nothing about the TV series "Game of Thrones" -- or its antihero character played by U.S. actor Peter Dinklage.

But now, 26-year-old Rozi Khan has customers asking to have selfies taken with him and fields constant questions about his uncanny resemblance to Dinklage, 49. The American actor has played Tyrion Lannister, a witty and wily nobleman, since the series began in 2011.

People even stop Khan on the streets, he says, also for selfies.

Khan does not only have a similar look, haircut and beard as Dinklage, but the two share a genetic condition that results in small stature. The Pakistani waiter says his height is 1.33 metres, or 4 feet 5 inches.

Dinklage's Pakistani doppelganger confesses that he likes his newfound popularity and that he has hopes the resemblance could help pull him out of a life of poverty -- and maybe even take him to Hollywood.

"It is my wish to work with Dinklage in movies," Khan told The Associated Press as customers crowded around him. "For me, it will be a dream come true to meet Dinklage."

Besides working as a waiter serving flatbread, mutton and other traditional Kashmiri dishes in the cafe in the garrison city of Rawalpindi -- and thanks to the striking resemblance to Dinklage -- Khan has already starred in a commercial for a food delivery service in Pakistan.

Khan says the first person to notice and tell him about the resemblance was the restaurant owner's son, Malik Aslam, who shared a photo of Khan on social media about two months ago.

That prompted Khan to take a look at some episodes of "Game of Thrones," which is airing on Pakistani cable channels. And although he couldn't read the subtitles -- he never went to school or learned to read and write -- he enjoyed watching his look-alike.

"God created two similar men, one is a popular actor and the other is a poor waiter," Khan added, recounting how smirks and laughs of strangers and even family members had hurt him in the past.

"Those people, passers-by and relatives who used to laugh at me because of my short height now take selfies with me," he said. "I may live and die as a waiter, but I am happy that a person (Dinklage) who looks like me is treated with respect."

The American actor has done a lot to help dwarfs everywhere fight against the stigma over their height, Khan also said.

"Some men like Dinklage were blessed with fame by God. I am happy over his success."