N.L. premier invites Trump to discuss tariffs as they view 'Come from Away' show 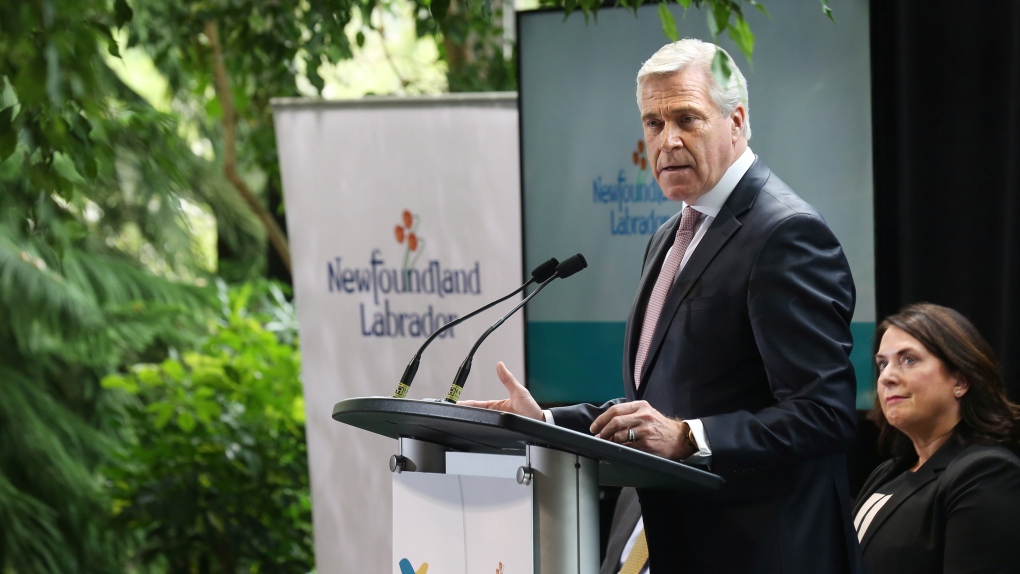 Newfoundland and Labrador Premier Dwight Ball speaks during an announcement in St. John's on Monday, June 11, 201.. THE CANADIAN PRESS/Paul Daly

ST. JOHN'S, N.L. -- Newfoundland and Labrador's premier has invited Donald Trump to the hit Broadway musical "Come from Away," saying he hopes "to discuss the virtues of a positive relationship" with the U.S. president.

Dwight Ball's letter to Trump, dated Tuesday, evokes the province's historic relationship with the United States, on both trade and military bases.

"I just wanted to refresh and take the president back in time, and just remind his administration on how important this reliable friendship and this business relationship is," Ball said in an interview Wednesday.

"It's just not a transaction, this is about longstanding relationships with our world's largest trading partner."

Ball tweeted a copy of the letter Wednesday morning. The invitation is at the president's leisure, at whichever city's version of the musical he prefers.

"Please advise of your acceptance of this invitation and I will forward you tickets," he writes.

Ball told The Canadian Press he took issue with the president's language treating Canada as a security risk. He sees "Come from Away" as an example of the longstanding friendship between Canada and the U.S., in more than just trade.

The musical tells the true story of how Gander, N.L., welcomed more than 7,000 stranded airline passengers after 9/11.

"The relationships that were formed at that time still last to this day, and it's really just symbolic of the relationship that we've had for many, many years," said Ball.

His letter describes Trump's recent policies on tariffs as "extremely troubling," and says he hoped to discuss "a positive and mutually beneficial trade relationship."

After this month's G7 summit in Quebec, Trump called Justin Trudeau "weak and dishonest." The president was apparently angered over the prime minister's comments at a press conference objecting to American tariffs on steel and aluminum.

Ball said his province has been affected by new U.S. tariffs, but the companies haven't had a chance to share their stories. He was among eight Canadian premiers who visited Washington in June 2017 to discuss NAFTA negotiations.

Ball's letter says Newfoundland and Labrador believes in the idea that "a rising tide lifts all boats."

Arts impresario David Mirvish first staged "Come from Away" in Toronto from December 2016 to January 2017 before it headed to Broadway.

Mirvish has said the musical's success has "befuddled all expectations" both in Toronto and on Broadway, where its feel-good charm managed to win the hearts of jaded New York theatre-goers as well as a Tony Award for best direction.

Its soundtrack has been nominated for a Grammy, and Canadian creators Irene Sankoff and David Hein are hard at work on a script for a film adaptation.

Ball said Wednesday he has not yet received a response, but he hopes Trump takes up his offer.

"I would love to be able to sit down and watch 'Come From Away'," said Ball.

-- With Michael Tutton in Halifax

Newfoundland and Labrador & the US have enjoyed a history of rising tides lifting all boats. Please join me to a showing of "Come From Away" to discuss the virtues of a positive relationship. The tickets are offered at your leisure & hopefully are tariff free. pic.twitter.com/ATcXS5MQGd