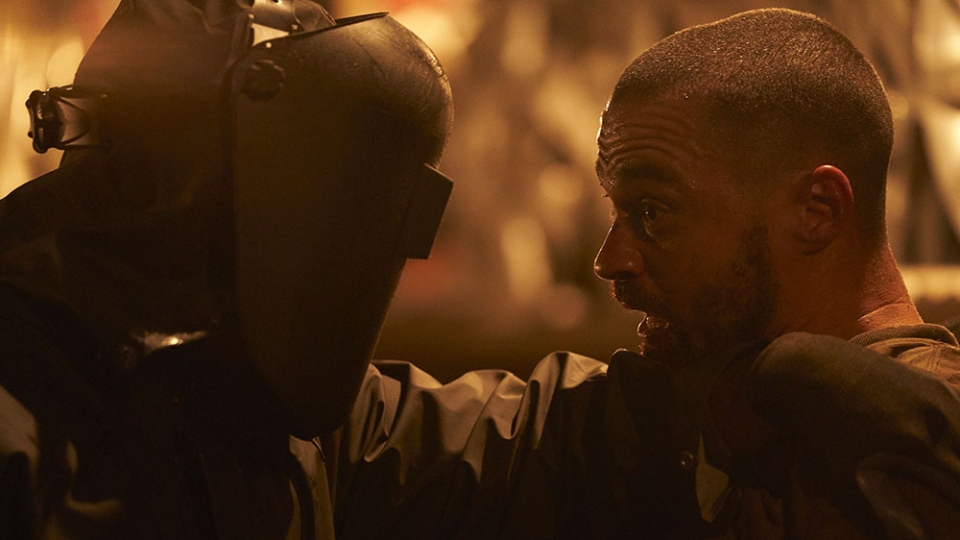 True crime stories, retold as police procedurals, are television and podcast staples. Millions of people make a date every Friday with “Dateline” for a breathless retelling of the crime de jour and more folks kill time with crime podcasts than almost every other genre.

Whatever the reason, we like it, but a new movie, “Random Acts of Violence,” now on VOD, may get us think about true crime in a different way. The film, co-written and directed by Jay Baruchel, details the consequences of turning a real serial killer into a pop culture phenomenon.

Based on a 2008 Image Comic by Justin Gray and Jimmy Palmiotti, “Random Acts of Violence” begins with comic book writer Todd (Jesse Williams) suffering a case of writer’s block. His series, a grisly and successful adaptation of a real-life serial killer dubbed Slasherman, is coming to an end and he doesn’t know how to wind it down.

On a press tour from Toronto to New York to promote the final issue, Jesse and wife Kathy (Jordana Brewster), assistant Aurora (Niamh Wilson) and BFF, Hard Calibre Comics owner Ezra (Baruchel), visit the scene of the Slasherman’s crimes. As the group fall victim to a series of heinous copycat crimes the film asks, “What are the real consequences when life (and death) begin to imitate art?”

“One of our friends is dead,” Kathy yells, glaring at Todd, “because of what came out of your f***ed up head.”

First know that while “Random Acts of Violence” is a condemnation of elevating killers to iconic status, it is also a blood-fest complete with entrails on the wrong side of the stomach muscles and sound effects that will haunt your dreams. It’s the bloodiest morality tale since the Old Testament.

It rides a thin line between commenting on pop culture’s obsession with brutality while displaying much of the behaviour it condemns.

What sets it apart is self-awareness. Baruchel confronts the audience with the kind of graphic murders that might even make Rob Zombie uncomfortable, just as the story confronts its own use of violence.

Is it perfect in its exploration of the morality of glorifying violence? No.

The social commentary is blunted by the carefully and stylishly staged violence that seems to play against the point Baruchel is trying to make. But the feeling of discomfort that comes with every stab of a knife asks us to examine why we view cruelty—particularly against women—as entertainment.

“Random Acts of Violence” is confrontational, voyeuristic and difficult, and, if nothing else, a conversation starter. 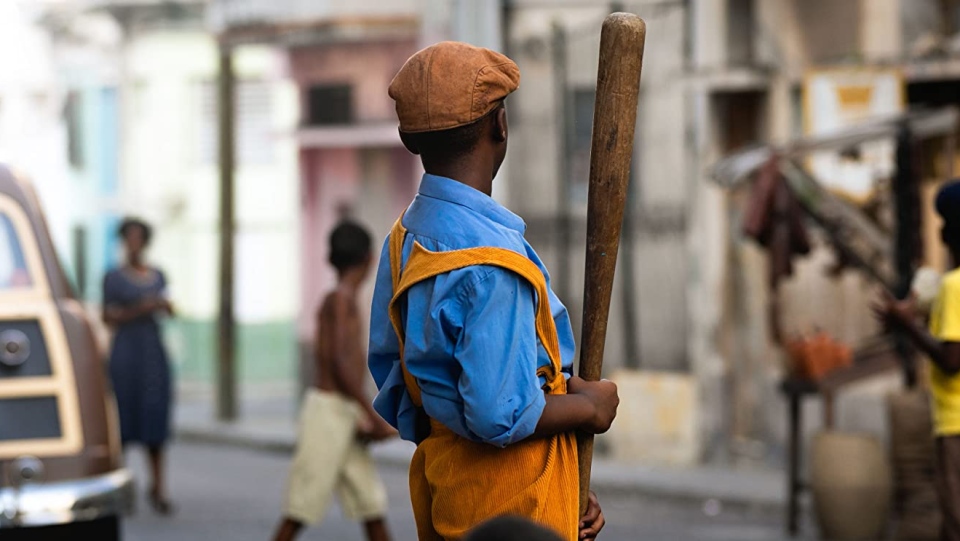 A testament to the healing power of music and friendship, “The Cuban,” now on VOD, makes the most of strong performances from Louis Gossett Jr., Shohreh Aghdashloo and “Degrassi: The Next Generation” alum Ana Golja, to tell a story that brims with heart.

Golja is nineteen-year-old Mina Ayoub, a pre-med student who gave up her dream of becoming a musician after she was orphaned in Afghanistan and sent to Canada to live with her aunt Bano (Aghdashloo).

In Afghanistan, Bano had been a doctor, but stripped of her credentials when she immigrated, she now works as the administrator of a long-term care home. Her dream is to see her niece practice medicine, but Mina dreams of the long-ago days she and her grandfather would make music together.

Working at the care home, Mina meets Luis (Gossett Jr.), an elderly man in the late stages of Alzheimer’s Disease. Nearly catatonic, he is non-communicative, staring blankly into space, until Mina hums a familiar jazz tune. He responds, and soon she creates her own brand of musical therapy to help Luis remember his past. And what a past. He tells her of his career as a famous musician in Cuba and the love of his life Elana.

Despite objections from the other care home staff who think Mina is overstepping medical boundaries, she continues out of affection for Luis who reminds her of her musical grandfather.

“The Cuban” could easily have been too earnest by half, a coming-of-age movie with heart tugging moments scored to a toe tapping soundtrack, but the poignant performances elevate the predictable story.

Gossett Jr., who is silent for much of the running time, finds multitudes in the character. Luis’ life is scarred by loss and loneliness, and he carries that with him, but the sheer joy that he exudes when he hears or makes music shows the profound effect it has had on his life. The actor finds poignancy in the performance and never overdoes it.

Aghdashloo does domineering really well, but her overprotective streak toward Mina is tempered by, like everything else in this movie, by love.

Golja plays off both of them very well, allowing the relationships to take front and centre, holding her own with her seasoned co-stars.

“The Cuban” works best when it focuses on those relationships. It wanders some when Mina gets a love interest and during the larger scale musical fantasy sequence but as a story of the curative power of music, it works, has a good beat and you can dance to it. 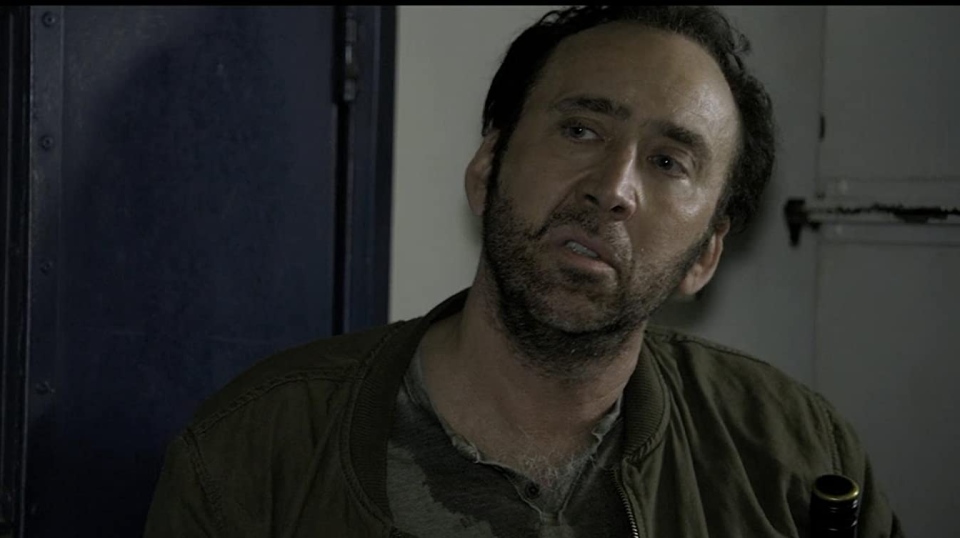 Imagine Noah’s Ark, but with killer CGI animals and a wise-cracking serial killer, and you get the general idea of “Primal,” the latest Nic Cage movie to go straight to VOD.

Frank Walsh (Cage) is a poacher in the jungles of Brazil; a loner who traps exotic animals for export to collectors and zoos in the U.S. His latest capture, El Fantasma Gato, is beyond rare. Worth maybe $1 million.

“Just like you Frank,“ says his kid sidekick (Jeremy Nazario) in the only comment that passes for character work in the “Primal’s” stripped-down B-movie world.

The action begins when Frank transports the animal on the large cargo ship. Trouble is, the U.S. government is using the same ship to transport a psychopathic killer to justice. Held Hannibal Lecter-style in a cage below deck by Navy doctor Ellen Taylor (Famke Janssen) and Government lawyer Freed (Michael Imperioli), Richard Loffler (Kevin Durand) is a former military man turned international terrorist.

“Primal” is the kind of movie Nicolas Cage bangs out between visits to his tax lawyer. It’s a film so far beneath has talent you have to wonder why he signed on. Did he always want to work with a talking parrot? Does he get paid by the cliché these days? Hard to know.

What is for sure is that “Primal” is one of those movies where the sheer stupidity of the story supplies the only entertainment value. The thrills fall short and the action is almost nonexistent but it’s almost worth the price of a rental to see Cage try and take down Loffler with a poison blow dart gun or argue with his parrot.

“Primal” will make you yearn for the days when Nic Cage movies like “Con Air,” “Gone in 60 Seconds” and “The Rock” promised and delivered offbeat delights. Cage brings his patented oddball performance style along for the ride, but even that isn’t enough to give “Primal’s” bland storytelling and lazy action some zip. 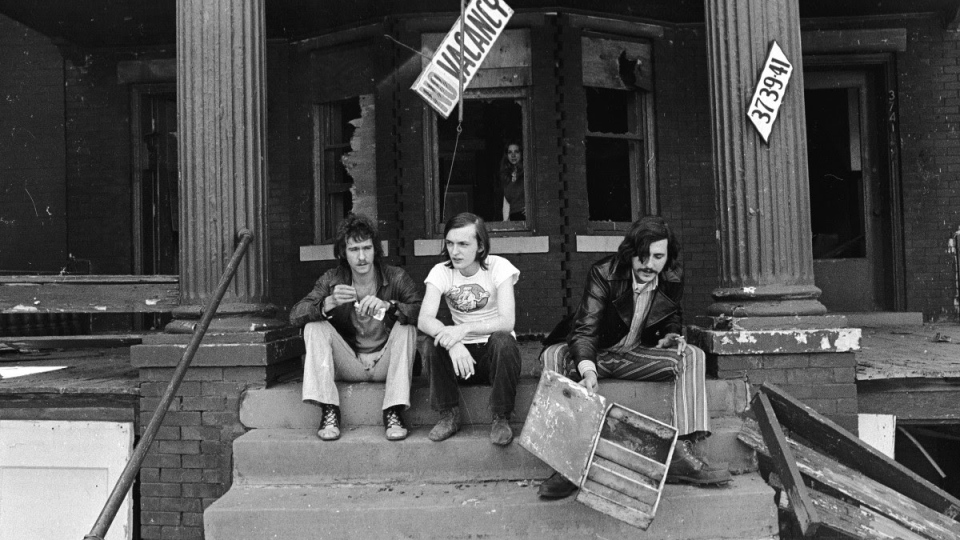 Like much of the music it chronicled in its 1970s heyday, Creem Magazine was rough n’ rowdy and self-destructive. “Creem: America’s Only Rock ‘N’ Roll Magazine,” a new documentary, now streaming courtesy of Virtual Cinema, has a close look at the magazine that embodied an irreverent but fervent rock n’ roll attitude.

“Nearly fifty years after Creem’s first issue published, it still stands for something,” says JJ Kramer, son of the founding publisher Barry Kramer. “Either you’re in on the joke, or you are the joke.”

Creem began as something different than the scrappy, politically incorrect screed that once so savagely reviewed a Runaways album that Joan Jett stormed the offices looking for revenge and created the term “punk rock.”

Under guidance of co-founder Tony Reay the Detroit magazine was conceived as a blues-rock forum but within a few issues Reay was on the curb and publisher Barry Kramer had hired Dave Marsh, a rock n’ roll misfit who brought a blue-collar street cred to the magazine’s content.

A fiercely opinionated champion of the take no prisoners approach to music journalism Marsh became the cornerstone of a gritty group of writers, like Lester Bangs, Jaan Uhelszki and Robert Christgau, who redefined how the music was discussed in the press.

“It was like it was written by a bunch on convicts in Joliet State Prison,” says artist and musician Lamar Sorrento.

As a poke in the eye to the staider Rolling Stone, the renegades even subtitled their mag “America’s Only Rock ‘N’ Roll Magazine.”

Their distance from taste makers on the coasts and proximity to Motor City music scene gave them a unique take. Working above a rundown record shop in inner city Detroit, and later on a rural commune, Kramer and Company created music journalism fuelled by passion, drugs and physical disagreements. Fights over content were not uncommon.

Envelopes were pushed, breasts were exposed, leading former fan Jeff Daniels to say buying the magazine was like “buying Playboy, you didn’t want your parents to see either one of them.”

The unconventional group advocated for Alice Cooper (despite labelling their debut LP “a waste of plastic.”), MC5 and The Stooges, bands with a similar swagger and anti-commercial instincts as the writers themselves. Members of R.E.M., Red Hot Chili Peppers, Pearl Jam and many others appear in the movie and were fans, and later went on to create idiosyncratic music like the punk, new wave and hard rock they read about in Creem.

The deaths of Kramer and Bangs and the defections of Marsh and Christgau to rival Rolling Stone spelled the end of the mag’s influential run and by 1989 it had been bought and sold, and ultimately shut down, leaving behind yellowing pages of some of the best rock n’ roll writing of the 1970s.

To capture the counter-cultural impact of Creem, director Scott Crawford has assembled many of the original players, including the iconoclastic Jaan Uhelszki, one of the first female rock writers and now, one of the co-producers on the film. It’s slickly produced, makes good use of archival footage and zips along at a rapid pace. Perhaps too rapid. Crawford covers two decades of history in under eighty minutes, briskly walking us through the tumultuous timeframe.

It is entertaining, particularly for those old enough to have bought the magazine on the stands, but although complete, it feels rushed. This cast of characters feels like each could warrant their own movie, and hell, I’d pay to see a movie about the contentious relationship between Lou Reed and the gonzo Bangs alone.

“Creem: America’s Only Rock ‘N’ Roll Magazine” isn’t as rough around the edges as the magazine it documents, but it does display why a scrappy upstart from Detroit was able to make and leave its mark.

In the film, legendary rock photographer Bob Gruen says that rock ‘n roll is about the freedom to express yourself very loudly. “And I think that’s what Creem did.”

Point your browser to: http://www.filmswelike.com/virtual-cinema-creem-americas-only-rock-n-roll-magazine and select the cinema you wish to support.