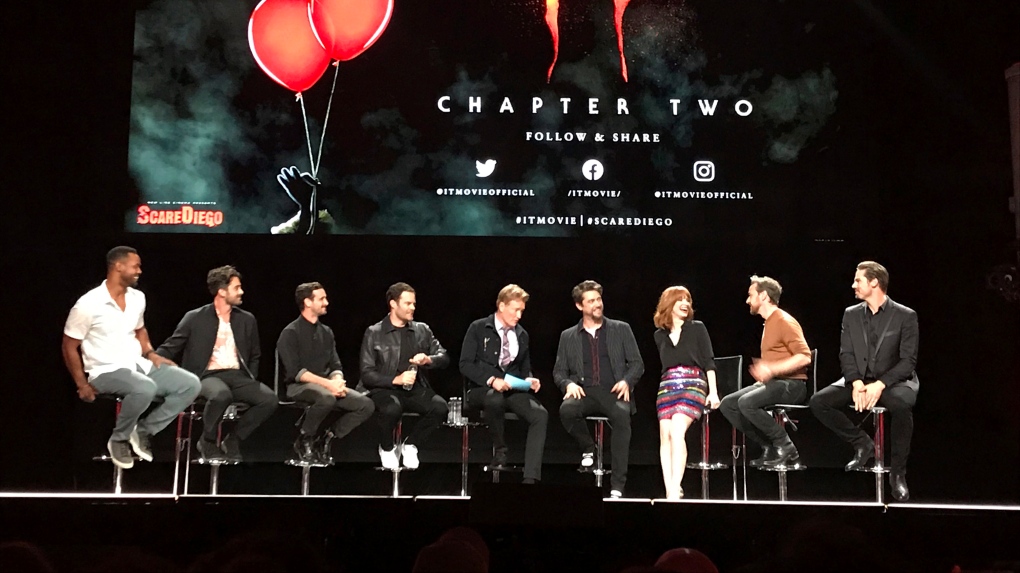 SAN DIEGO -- "It: Chapter Two" is not taking it easy on the grown losers' club if the new trailer is any indication, and the shoot itself doesn't sound much calmer than battling a demonic clown either.

A theatre of fans got a sneak peek at the latest promo for the horror sequel at a Comic-Con event Wednesday night in San Diego before it's released to the world Thursday morning.

Cast including James McAvoy, Bill Hader and Jessica Chastain were also on hand to tease three chilling extended scenes that had the audience gasping, laughing and cheering. They described the intensity of the shoot with director Andy Muschietti, who wouldn't quit until he got the perfect shot.

Chastain recalled doing a scene with blood. She wasn't supposed to get any on her face, but she protested and said, "No, let's make it 'Carrie' on steroids." Later, "freezing and very uncomfortable" in a kiddie pool covered with the fake blood, she may have regretted her choice.

They laughed that throughout filming they used a "record" amount of fake blood -- 4,500 gallons (17,035 litres), according to Chastain.

McAvoy also talked about filming a particularly hair-raising scene in a hall of mirrors that he said was "like a nightmare ... absolutely horrific. There was no fun in it."

And all marveled at Bill Skarsg├Ñrd's ability to transform into Pennywise the clown.

"He's super imposing in the costume," Bill Hader said. "He's a super nice guy but then when they say 'Action,' it's like a whole other being."

McAvoy worried occasionally that Skarsg├Ñrd was actually going to hurt himself in character. According to the cast, the "eye trick" Pennywise does where one eye is looking straight and the other goes off to the side is not computer-generated; it's just something Skarsg├Ñrd is able to do.

"It's like he was born to play Pennywise," Hader said.

Conan O'Brien moderated the late night ScareDiego event put on by Warner Bros. and New Line Cinema and pleaded with the audience not to record any of the footage.

The film opens nationwide on Sept. 6.