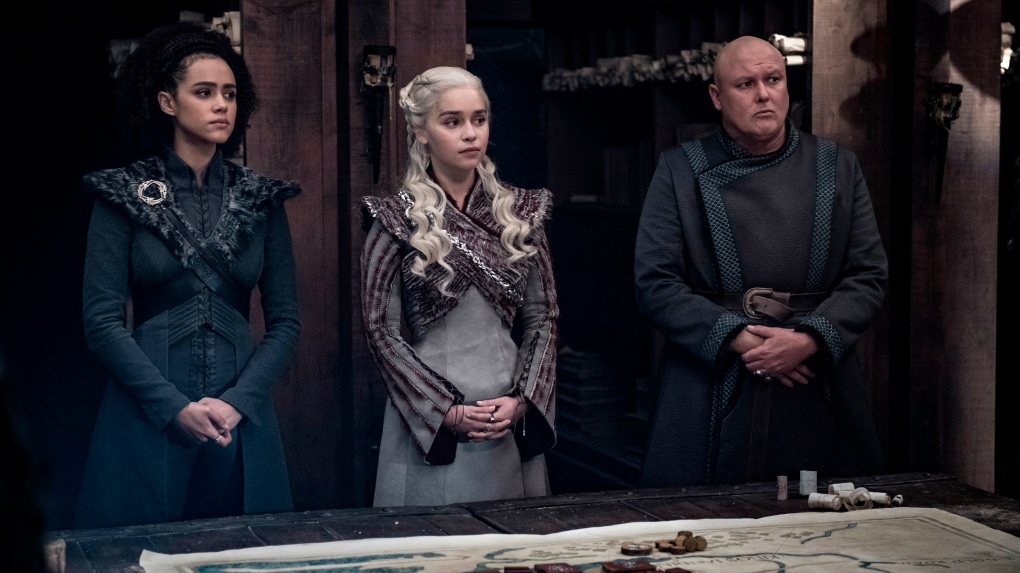 This image released by HBO shows from left, Nathalie Emmanuel, Emilia Clarke and Conleth Hill in a scene from "Game of Thrones," that aired Sunday, May 5, 2019. (Helen Sloan/HBO via AP)

Game of Thrones' eight-year run ended in May to decidedly mixed reviews.

But, six months on, a subplot from the series is still fascinating viewers: the mystery of who left a rogue coffee cup in full view during a scene of the fantasy drama.

And now the saga has taken another twist, after the alleged culprit denied responsibility for the incident, which caused a stir on social media during the show's final series.

Emilia Clarke, who played Daenerys Targaryen, had accused her co-star Conleth Hill of admitting to the faux pas last month.

But Hill, who played Lord Varys in the series, told British broadcaster Channel 4 on Sunday: "You know, there's no proof that I did it. So accuse away."

"I would need to have had Mr. Man arms to leave a coffee cup there," Hill added. "I took a bullet for Emilia Clarke and she touted on me."

"Mr. Men" is a series of British children's books, one of which features a character with extra-long arms.

Hill also joked: "I'm just not making any comments until I have a lawyer," and quipped that the slip-up "definitely wasn't product placement."

The drama over the coffee cup -- spotted by eagle-eyed viewers on a table in the great hall of Winterfell -- briefly overshadowed the battle for the Iron Throne during the show's final stretch, with fans mocking the mistake and demanding that showrunners spill the details of who was responsible.

Clarke had previously seemed to put the mystery to bed, telling Jimmy Fallon last month: "We had a party before the Emmys recently and Conleth, who plays Varys, who's sitting next to me in that scene, he pulls me aside and he's like, 'Emilia, I have got to tell you something, love. The coffee cup was mine.'"

That accusation contradicted another account from Sophie Turner, AKA Sansa Stark, who had pinned the blame on co-star Kit Harington.

And the culprit isn't the only mystery surrounding coffee-cup-gate. Commentators on social media speculated the cup was from Starbucks, but various online amateur detectives and an in-depth digital imagery analysis by CNN (we zoomed in on the cup) have failed to provide a conclusive answer.

It seems certain, though, that the flat-white-sized cup had not been bought in Westeros, given the mythical continent's shortage of coffee chains.

HBO responded to the incident deftly at the time, saying on Twitter: "The latte that appeared in the episode was a mistake. Daenerys had ordered an herbal tea."

The cup was later digitally removed from the network's streaming platform, but the makers were left blushing again when viewers spotted a water bottle tucked away during a scene in the show's finale.

More concerning still for HBO was the reception to the parts of the show they'd intended to put on screen. Viewers complained the series had been rushed, and more than 1.7 million people have signed a petition urging showrunners to "remake 'Game of Thrones' Season 8 with competent writers."