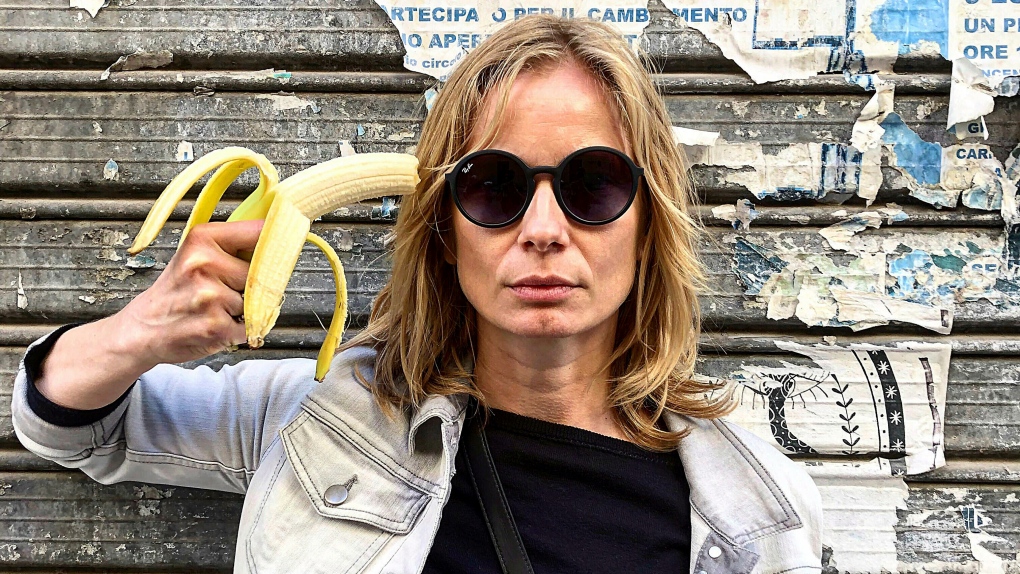 Polish actress Magdalena Cielecka aims a banana like a gun at her head to protest the removal of an art work from the National Museum in Warsaw that features a woman eating a banana with visible pleasure, which the conservative authorities say is obscene. (AP Photo/Dario Salina)

WARSAW, Poland -- A few hundred mostly young people jointly ate bananas outside Warsaw's top national gallery on Monday to protest what they called censorship, after authorities removed artwork there featuring the fruit, saying it was improper.

The protest was called by artists and opposition politicians as part of their action on Facebook and Twitter of posting photos of themselves eating bananas in order to ridicule the ban. The action grew into a show of apparent criticism of the government.

The 1973 video "Consumer Art," by prominent artist Natalia LL, showing a young woman eating a banana with great pleasure, was removed from the National Museum in Warsaw last week after the new museum head, Jerzy Miziolek, was summoned to the Ministry of Culture.

Miziolek said in an interview with the Onet.pl portal last week that he was "opposed to showing works that could irritate sensitive young people" and suggested some visitors have complained. The work had been in the gallery for many years.

A separate 2005 video by another controversial female artist, Katarzyna Kozyra, showing a woman walking two men on all fours, dressed as dogs on a lead, was also removed.

On Monday, Miziolek announced that the works would be reinstated, but only until May 6, when the whole modern art gallery is due for reorganization. Miziolek and the Ministry of Culture denied there was any pressure on the museum.

Miziolek, who was appointed to the state-run museum by the right-wing government in November, said Monday he appreciated the role of both artists in Poland's culture, but the gallery's limited space requires "creative changes" to the exhibition.

The dispute is the latest in a string of controversies surrounding art and culture under the conservative and nationalist government that won power in 2015.

Culture Minister Piotr Glinski has repeatedly drawn criticism for cutting subsidies to art festivals that were planning to show controversial theatre plays on Catholic themes. Glinski has fired a popular theatre director who criticized him as well as the director of a World War II museum, saying the exhibition did not show Poland's suffering or heroism enough.

He recently cut funds for the European Solidarity Center, an exhibition on the Solidarity movement's history and a culture centre popular with government critics, saying its activity went beyond its history-teaching mission.

Twitter and Facebook users ridiculed the removal of the art works as narrow-minded and a case of censorship, and many posted photos of themselves enjoying bananas.

Actress Magdalena Cielecka told The Associated Press that the image she posted, of her pointing a banana at her head like a gun, was in protest against any ideological or political limits put on artists.

"An artist, to create, must be free," Cielecka said.

At the collective banana-eating protest Monday night, some people brought more than one banana, while others put banana skins on top of their heads. A few unarmed police officers were on the scene outside the museum, which is closed on Mondays.

Senate speaker and prominent ruling Law and Justice party member Stanislaw Karczewski sought to discredit the protest, tweeting that Polish apples are tastier than bananas and have fewer calories.

"The .BananowyProtest (banana protest) is the straight road to obesity," Karczewski tweeted.

The controversy was widely commented on in national media.

Art critics note that "Consumer Art" was a critical comment on food shortages under communist rule in the 1970s.