Young immigrants may leave Canada due to high cost of living: survey 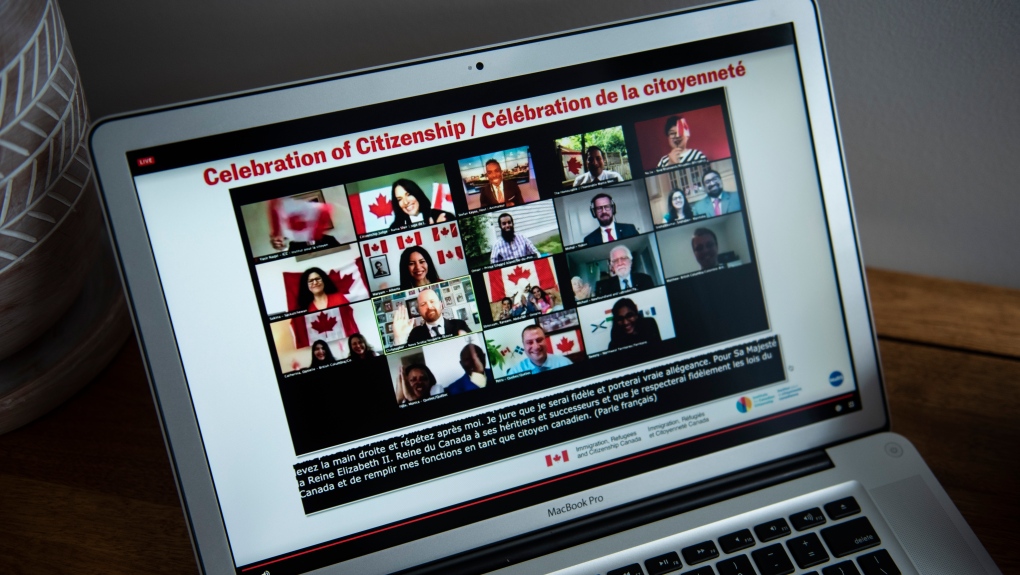 Participants celebrate becoming Canadian citizens after swearing the oath of citizenship during a virtual citizenship ceremony held over livestream due to the COVID-19 pandemic, on Canada Day, Wednesday, July 1, 2020, seen on a computer in Ottawa. (THE CANADIAN PRESS/Justin Tang)

A new poll suggests 30 per cent of new, young immigrants to Canada could leave the country in the next two years.

According to a national survey conducted by Leger for the Institute for Canadian Citizenship (ICC), 30 per cent of new Canadians aged 18-34, and 23 per cent of university-educated new Canadians, said they are likely to move to another country in the next two years.

While the Canadian adults and new Canadians surveyed both generally believed Canada provided a good quality of life for immigrants, researchers said Canadians were more likely to have a positive outlook on Canada's prospects for immigrants than the immigrants themselves.

"Canada is a nation of immigrants — and one of the stories we tell ourselves is that we are welcoming to new immigrants, wherever they may be from," ICC CEO Daniel Bernhard said Wednesday in a press release. "But while this may be generally true, new survey data points to the fact that many new Canadians are having a crisis of confidence in Canada — and that should be ringing alarm bells all over Ottawa."

When asked whether they thought Canadians don't understand the challenges immigrants face, 72 per cent of new Canadians agreed, in comparison to 54 per cent of Canadians.

The cost of living in Canada has recently jumped at a rate not seen in over 30 years, with economists warning that inflation rates could get even higher. Housing is also becoming increasingly scarce, with record-low mortgage rates propelling Canadian home prices 52 per cent higher over the past two years and fewer rentals available on the market at an affordable price.

With cost of living on the rise in Canada, another concern among new Canadians is entry into the workforce at fair and livable wages. Immigrants with university degrees had less favourable opinions on matters related to fair job opportunity and pay than other new Canadians, with just 29 per cent of immigrants with university degrees agreeing that immigrants are paid fair wages based on their work experience.

Among new immigrants who would not recommend Canada to other prospective immigrants as a place to live, current leadership and the high cost of living were the top two reasons.

The federal government plans to ramp up the number of new permanent residents in Canada over the next three years in order to fill holes in important workforce sectors such as health care and education. But researchers said Canada may need to offer more support to new Canadians in order for that to happen.

"The data suggest that younger, highly skilled immigrants in particular are starting to fall between the cracks," Dave Scholz, Leger's executive vice-president, said in the release. "We need to continue working hard to ensure that we are welcoming newcomers with the resources they need to succeed, and that we continue to be a country that provides opportunity."

No margin of error can be determined because of the use of a web panel in this case. For comparative purposes, a probability sample of 2000 respondents would have a margin of error of ±2.5%, 19 times out of 20.