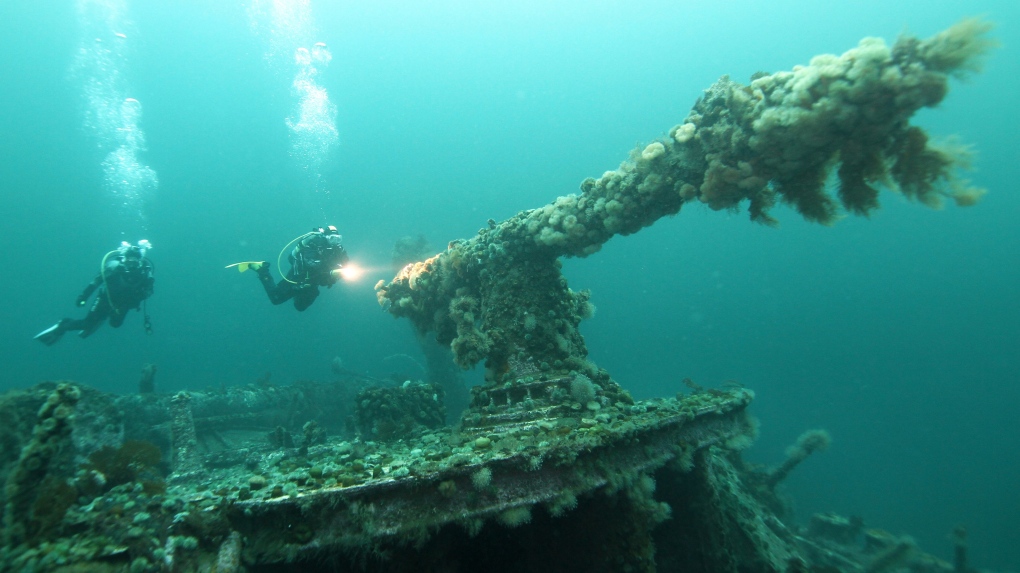 Divers explore the gun on the deck of the SS Saganaga shipwreck off the coast of Bell Island, N.L., in an undated handout photo. (THE CANADIAN PRESS / HO-Rick Stanley)

Canadian Armed Forces have collected unexploded artillery from the ocean floor following a sweep of four ships sunk by the Nazis during the Second World War.

Royal Canadian Navy clearance divers visited the site off the coast of Bell Island in Newfoundland this week, to collect any undetonated explosives that remain.

The wrecks, the Lord Strathcona and Rose Castle from Canada, France's PLM 27 and Britain's S.S. Saganaga, are popular diving spots, but there were growing concerns that a diver might accidently trigger a leftover bomb.

The footage of the retrieval, recorded July 16 and 17, shows the rusting wrecks at the bottom of the Atlantic encrusted with marine life, including flower-like anemones.

The divers are seen carefully bringing artillery shells from the sunken Saganaga to the surface before they are placed in an armoured vehicle designed to transport explosives.

The ordnance was then taken for safe disposal at a Canadian Forces range about 45 minutes west of St. John's, where they were detonated.

The sunken ships, each about 120 metres long, were carrying iron ore from Bell Island's mines to steel mills in Sydney, N.S.

Bell Island was one of the few places in North America to be attacked by German forces during the Second World War.

Rick Stanley of Ocean Quest Adventures has spent the last two decades guiding tours of what he calls the "underwater museum" of the wrecks.

He told the Canadian Press the connection to Canadian, British, French and German forces as well as Bell Island families who tended to the survivors draws visitors from diverse backgrounds.